Of Course We Should Call Out Trayon White 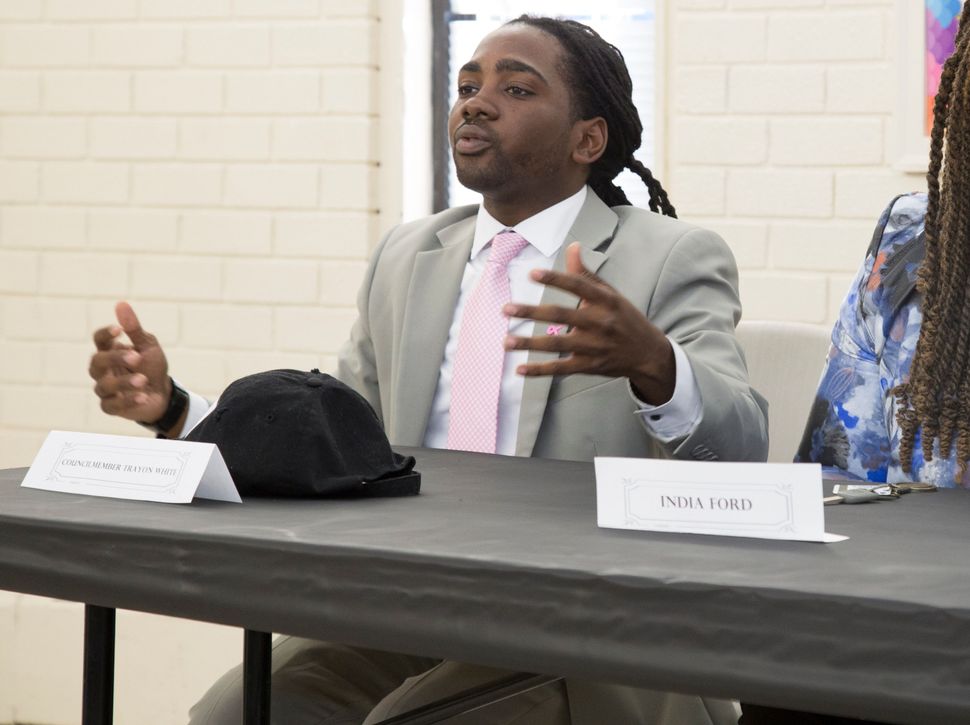 Rafael Shimunov’s piece entitled “The Shameful Character Assassination of Trayon White” does not advance a credible argument. Mr. White got into trouble by making ridiculous claims that the Rothschilds control the weather and the federal government. There may be a reasoned argument that Mr. White was taken in by such wild conspiracy theories because of his own poor education and difficult upbringing. Any such argument in his defense would have to contend with the facts that Mr. White is 34 years old and a magna cum laude graduate of the University of Maryland Eastern Shore. He has therefore had ample time and opportunity to learn something about the world, which would have made it clear that the theories he espoused were absurd and dangerous. Nonetheless, I could imagine an argument that he should not be subject to ridicule or worse when he tries, for example, to learn something about the Holocaust.

Mr. Shimunov, however, does not make that argument. Instead, his argument seems to be twofold.

First, he says, Mr. White talked about Rothschilds but did not specifically mention Jews. It may be true that Mr. White did not know that the Rothschilds were Jewish. It may also be true that Mr. White did not know of the unspeakable wrongs committed under the influence of exactly those kinds of claims about the Rothschilds and others. Nonetheless, given those unspeakable wrongs, it is surely justifiable that such claims, especially when made by public officials, be subject to news coverage and criticism.

In any event, the problem here is not just the Rothschilds, and not just anti-Semitism. Contrary to Mr. Shimunov’s apparent belief, Mr. White is not in the same position as the “kids from Oakland” who needed education on the Holocaust. Mr. White is a city councilman in Washington, D.C., where I live. He participates in making the laws that govern me and everyone else in our city. He apparently is so out of touch with reality that he believes that climate change could be caused by a family’s control over the weather. But climate change threatens all of us — the poor (including his constituents) likely more than others, since the poor, as usual, will likely suffer the most as our climate gets hotter. We all should be concerned when someone with so little ability to distinguish truth from bizarre flights of fancy is in a position to act on his beliefs in a way that affects us all. Even an apology for the (assertedly unintentional) anti-Semitism of his remarks does not excuse his apparently willful ignorance of the real threat of climate change. And though White apologized for any anti-Semitism, to this day, he has not withdrawn or disavowed the weird claim that a family — of whatever religion — could possibly control the weather (not to mention the federal government).

Mr. Shimunov’s other main argument seems to be that the coverage of Mr. White was unfair because of the backgrounds of the reporters involved. Mr. Shimunov carefully explains that Peter Jamison, who originally reported on Mr. White’s story and covered his visit to the Holocaust Museum, was a “Yale-educated white man” and a “proud 6th-generation Californian.” He also notes that Jamison and other reporters who covered Mr. White’s visit are “rich white people” who had “lives much softer than” Mr. White; and that “another Ivy League grad Washington Post writer, Fenit Nirappil,” lawfully obtained and reported on Mr. White’s emails and his support of Louis Farrakhan.

The articles in question do not identify the race of Mr. Jamison, Mr. Nirappil, or the other reporters mentioned (though Mr. Nirappil’s name may suggest something other than an entirely European heritage). I do not know whether their lives have been “soft,” hard, or in-between, or to what extent they or their families are “rich.” Mr. Jamison may well be a “6th-generation Californian.” But what does any of this have to do with the legitimacy of their reporting on Mr. White and his strange and harmful beliefs? If these reporters had been African-American, or had attended other universities, would they have necessarily written different stories that were more favorable to Mr. White?

As for education, I was the beneficiary myself of an Ivy League education. I know first-hand that an Ivy League background is no guarantee of wisdom or competence. Nor does attendance at a less prestigious college, or no college at all, suggest a lack of those qualities. But what does this have to do with the reporting on Mr. White? Ivy League graduates in the newspaper profession are like other reporters. Some are good, some are not. Is their educational background a reason why their reporting is unreliable, false, or otherwise unfair, as Mr. Shimunov suggests? Should newspapers publish the race, wealth, living conditions, education, and extent of American ancestry of each of their reporters in every story, because only then can we determine whether to pay attention to it?

Contrary to Mr. Shimunov’s position, classifying a reporter by race, wealth, education, or ancestry — white, rich, Ivy League, 6th generation Californian — is not sufficient to establish whether his reportage is sound. If there were an argument to be made that Mr. White was treated unfairly, Mr. Shimunov should have made it.

James A. Feldman is an attorney in Washington D.C. and member of the Board of Directors of the Forward.

Of Course We Should Call Out Trayon White