Hard truths from the Gaza border 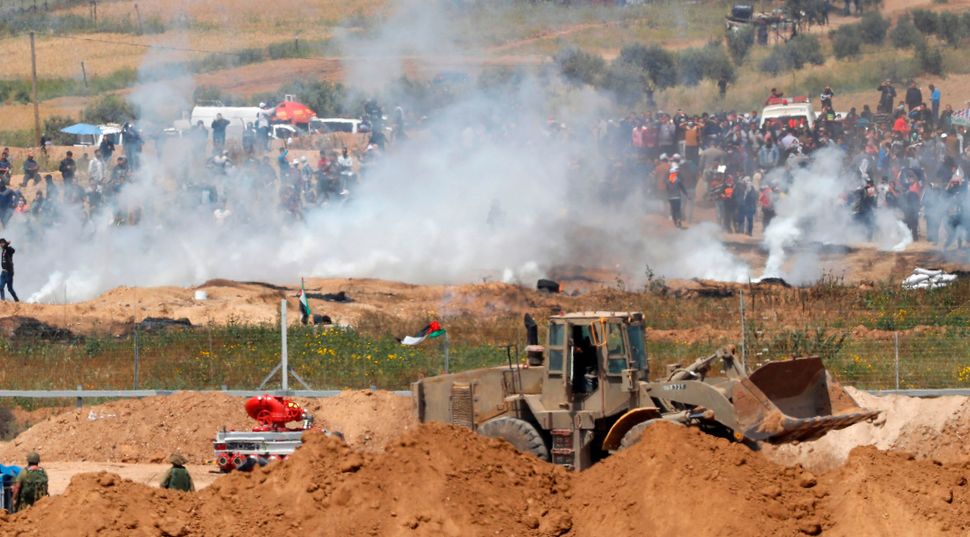 The mainstream media has been ablaze with coverage of the Great Return March, a series of weekend protests of Gazans at several sites along the separation fence with Israel. Many have taken to the pages of publications like this one to criticize Israel’s mistreatment of the protesters, like Peter Beinart in his recent piece “American Jews Have Abandoned Gaza – And the Truth.” There Beinart argues that neither Hamas nor security concerns nor Israel’s withdrawal from Gaza in 2005 can justify Israel’s actions.

Although it does raise important points about the possible roles American Jews can take in this crisis, Beinart’s piece does not deal with some of the most basic counter-evidence.

I am a member of a kibbutz on Israel’s border with Gaza and live daily in the shadows of this counter-evidence. I will share my thoughts here from our side of the fence.

I emigrated to Israel in the early 1980s from the United States at age 18 and have lived on border kibbutzim since then. As a member of Kibbutz Nir Oz, my home is approximately one and a half miles from the border with Gaza and faces the Friday protests that have erupted over the past five weeks. My “day job” is as a professor of history at the Hebrew University of Jerusalem.

Like nearly all kibbutz members in the border communities, I have little affinity for our current government or its policies. As an Israeli I am frequently appalled by Jerusalem’s policies toward the Palestinians and its behavior vis-à-vis diaspora Jewries; as an Israel-American, I am deeply troubled by the widening divide between Israel and non-Orthodox diaspora communities, some of which result from those policies.

Like most kibbutz members, I am dedicated to defending the country, strengthening its economy and preserving liberalism, despite its myriad challenges in Israel, which stubbornly retains a tribalism that inhibits the emergence of civil society alongside an electoral system that disproportionately rewards extremist sectorial grandstanding. Kibbutzniks living on Israel’s borders would benefit the most from peace with our neighbors, yet are the most endangered of all Israelis by the current state of affairs.

For the most part we understand that neither Israelis nor Palestinians have the quality and courage of leadership that they deserve.

Beinart deserves praise for raising timely issues. For one, mainstream American-Jewish leaders should reassess what they feel they can, and cannot, accept as Israeli government policy; this is true whether one feels passionate about the Gaza humanitarian crisis, questions of religious freedom, the treatment of illegal immigrants in Israel, the status of the Western Wall, inequalities facing Israel’s non-Jewish minorities, the vast and growing disparity between “haves” and “have-nots” or the pervasive corruption in Israel’s political system.

Secondly, there is surely much to question about some seemingly unnecessarily harsh and counter-productive aspects of Israel’s policy toward ordinary Gazans. Indeed, all Jews would benefit if American-Jewish leaders interacted more forcefully and consistently with the Israeli government around these problems, none of which pose an existential threat to Israel but certainly impact global Jewry.

From here, however, there is much in Beinart’s article that demands a reply. It’s true that underlying the worldview shared by most Israelis is a garrison mentality cynically manipulated by our politicians since the days of David Ben Gurion. Leaders from almost all of our parties have at one time or another used dire warnings (some based in reality, others not) of imminent, Holocaust-like catastrophes if intransigent policies toward our neighbors were not pursued.

It is painful to admit that perhaps Israel is slowly becoming that which the late Abba Eban observed about the Palestinians, a state which “never miss[es] an opportunity to miss an opportunity” for forging peace.

And yet, like most enduring myths and national narratives, there are important grains of truth embedded in this garrison mentality.

A short list must include the fact that since 1948, a series of large Arab states have proclaimed their intent to destroy Israel, most recently embodied in statements from Iran’s leaders. Beinart doesn’t mention this.

Second, generations of Israelis have suffered murderous cross-border attacks perpetrated by Palestinian terrorist organizations or individuals since the early 1950s, many of them originating in Gaza. During the Second Intifada alone, more than one thousand Israelis were murdered. Beinart makes no mention of this either.

Third, since Israel’s unilateral withdrawal from Lebanon, it has faced the growing threat of an Iranian-supported Hezbollah devoted more to Israel’s destruction than to state-building in Lebanon. In recent years, the situation on Israel’s northern border became even more tense with the destabilization of Syria and the regional ascendance of ISIS.

Perhaps most crucially, after the Oslo agreements were signed, waves of terror attacks from the West Bank and Gaza flooded Israel, forcing the construction of barrier walls and fences, which for the most part have eliminated cross-border incursions.

Finally, whether or not one is convinced by Beinart’s interpretation of the causes of Hamas’ 2007 putsch in Gaza, it (and other terrorist groups) have indiscriminately launched massive numbers of mortar shells and rockets at our communities, sparking three deadly rounds of large scale operations by the IDF.

Of course, Beinart correctly observes that this cycle only creates more suspicion and pain on all sides. That being said, it is disingenuous for anyone, including Beinart, to obscure that Hamas continues to invest vast amounts of its available resources in constructing elaborate attack tunnel systems and other weapons designed to kill Israeli soldiers and civilians instead of rebuilding Gaza’s economy and educational system.

As a result of these historical truths, Israelis along the border and the IDF have good reason to believe that our lives would be at risk if thousands of enraged Gazans — whatever the justification for their anger — tore down the border fence.

As a liberal and patriotic Israeli and the son of a Holocaust survivor and a refugee from Nazi Germany, my heart aches at the humanitarian disaster unfolding within eyeshot of my home, some of which Israel could ease with little risk to its security. Therefore, I agree fully with Beinart’s call to American-Jewish leaders to pressure their Israeli counterparts to make common sense, humanitarian changes to policy toward Gaza.

While Beinart is on solid ground when noting that a majority of the current residents of Gaza are descended from refugees of the War of Independence, he neglects to mention that they became refugees mostly as a result of Arab rejection of the 1947 U.N. Partition Plan and the invasion in 1948 of newly independent Israel.

This truth in no way excuses the parts of Israel’s policy toward Gaza that are tantamount to collective punishment. But no one, including Mr. Beinart, should be condoned or followed in criticizing Israel without first taking these truths fully into account.

I pray that this more holistic approach toward the conflict can help encourage a renewed, truthful, caring, respectful conversation among American Jews and Israelis, particularly those who claim the right of leadership.

Jonathan Dekel-Chen is a professor of history at the Hebrew University of Jerusalem. He lives on Kibbutz Nir Oz near the Gaza border and is co-founder of the Bikurim Youth Village for the Arts in the Eshkol Region of Israel.

Hard truths from the Gaza border