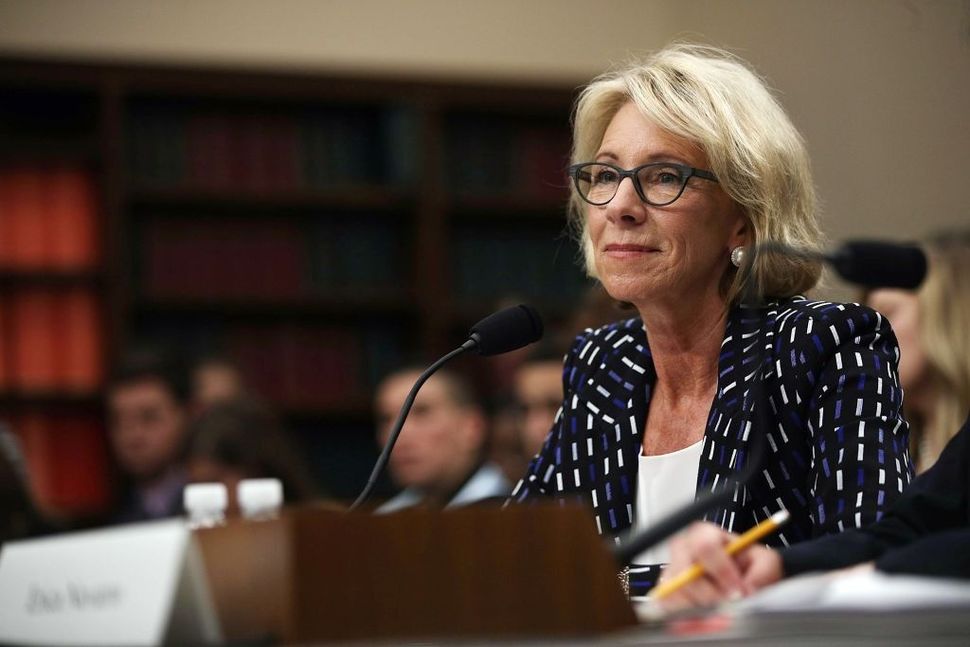 U.S. Secretary of Education Betsy DeVos testifies during a hearing before the Labor, Health and Human Services, Education and Related Agencies Subcommittee of the House Appropriations Committee May 24, 2017 on Capitol Hill in Washington, DC. The subcommittee held a hearing on ‘Department of Education Budget.’ Image by Getty Images

The Trump administration’s odd relationship with American Jews was on full display last week in Jerusalem. There, a multitude of end-times obsessed evangelical politicians gathered at the new U.S. Embassy to fantasize about Kingdom Come. U.S. Ambassador David Friedman and Prime Minister Benjamin Netanyahu who, having wantonly chosen politics over their obligations to the founding principles of both the United States and Israel, reveled in the spectacle attended them.

But nearly lost in the din was Secretary of Education Betsy DeVos’s short visit to two New York City schools. Although the visit was widely reported and even criticized for its choice of schools, the connection between what occurred in New York City and Jerusalem went without comment or criticism.

DeVos chose to visit two private, Orthodox-Jewish schools rather than public ones, despite the fact that the latter represent most of the primary and secondary education in the city. That’s not surprising when you consider her negative views about public education and her advocacy on behalf of public funding for private (read religious) schools.

Enter the Agudath Israel of America, the Orthodox Jewish umbrella group. According to the Jewish Telegraphic Agency, DeVos visited the schools at its behest. In an email statement to JTA, Rabbi Abba Cohen, Agudath Israel’s Vice President for Federal Affairs and Washington Director and Counsel, said the visit was so DeVos could “better understand Jewish education, a unique and time-honored tradition, within the diversity of the American educational tapestry.”

It hardly takes an education expert to understand that Jewish religious schools could benefit from public money for private, religious education in the form of school vouchers. Does Agudath Israel want to make sure DeVos looks with favor on a Jewish brand?

The terrifying effect of implementing DeVos’s and Agudath Israel’s purely parochial agenda would be to tear down the wall between church and state in this country. Their alliance makes for very strange bedfellows, as it were, in the same way as Ambassador Friedman’s and Prime Minister Netanyahu’s with the end-times, anti-Judaism crowd to whom they’ve been pandering.

These are very dangerous alliances for any American Jew to sanction.

Separation of church and state, along with the liberal ethos, are precisely what has allowed Jews to thrive in the United States. These principles protect Jews. Indeed, the rise of government based upon or even favoring religion or religious interpretation of civil law harkens back to lives in countries where church and state were one and the same. As Jews, we support that in the United States at our peril. It is both wrongheaded and shortsighted for a people so attuned to the forces of history to do otherwise. The chipping away of the church state wall built into our Constitution is suicidal.

As I find it hard to believe that Cohen and the Agudath are naive, or stupid or ignorant of history, I can only ask why they have chosen this path.

Even as anti-Semitism and anti-Israelism are on the rise in the U.S. and other countries, Jews must be advocates for religious, ethnic, and social diversity, because in that diversity lays our own physical and religious safety. It assures us that we can practice Judaism in our homes and in our communities in the open and not in secret and without fear. We should support with our taxes, our organizations, and our votes the best public education available even as some of us choose to send our children to private religious schools. Make no mistake, the operative word here is choice, for there were centuries in other places where we had none.

This is a time when we are justifiably concerned about interference in our political system from without. But the dangers from within are just as grave.

Toni Kamins is a New York writer whose work has appeared in the New York Times, the LA Times, the Jewish Telegraphic Agency and numerous other publications.