Letter to the Editor: I Organized the Bard Conference, and Batya Ungar-Sargon Misrepresented What Happened 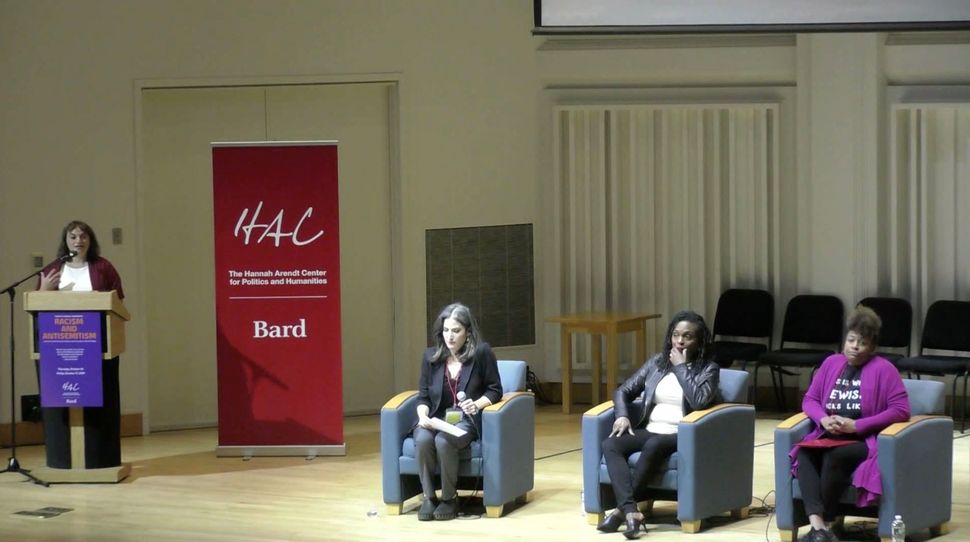 I am the person who invited Batya Ungar-Sargon, the Opinion Editor of The Forward, to participate in a recent conference hosted by the Hannah Arendt Center at Bard College, a conference where she contends in a column published Oct. 12 that she was protested for being Jewish and, as a result, “couldn’t proceed” with her talk.

I have great sympathy for Ungar-Sargon, and great admiration: I was excited to invite her to speak to our undergraduates and the wider community. I am truly sorry to hear how negative her experience was: the very last thing I would want at a conference I organized on “Racism and Anti-Semitism” is for a participant or an attendee to have felt singled out for discrimination.

Related story | Letter to the Editor: I Was at the Bard Anti-Semitism Panel, and Saw Deep Disagreement, not Singling Out of Jews

But Ungar-Sargon’s account of what happened at the conference misrepresents the facts. At no point was anyone prevented from speaking; the talk she refers to proceeded until its end. You can see for yourself by watching the video of the conference here.

Ungar-Sargon was to have given two presentations on the second day of the conference. When she writes, “I never got to say or do most of these things,” it is only because she elected not to participate and instead to depart the conference.

The first day of the conference, Ungar-Sargon was a moderator for a talk by Ruth Wisse, professor emeritus at Harvard University, a scholar of strong and controversial opinions, and an 83-year-old survivor of the Holocaust. The title of the session was “Who Needs AntiSemitism?”

Wisse has frequently defended the view that anti-Semitism includes singling out Israel amongst the world’s nations for its wrongdoings. She also argues that the Arab states and Palestinian people are in a war against Israel and that it is anti-Semitic to hamper Jews in their rights to defend themselves. These are positions my colleagues and I felt had to be heard among the broad range of voices we were including in the conference.

As Wisse was delivering her remarks, undergraduate protesters representing Students for Justice in Palestine, many of them Jewish, arrived to protest. They were protesting not because Wisse and the other two speakers on stage were Jewish, as Ungar-Sargon suggests (the many other Jewish speakers on other panels at the conference were not protested), but because Wisse, Ungar-Sargon and the third panelist espouse political opinions with which the students disagree.

We were alerted to the possibility of protest in advance, and I worked with the president and deans of the college, as well as Bard security, to develop a detailed contingency plan.

We first sought to convince students not to protest. Some listened to our advice. We then advised those intent on protesting that they would have the right to silently protest in the hall, but that were they to disrupt the talk or prevent Wisse from being heard, we would remove them and consider disciplinary action. This is consistent with Bard policy for protests of invited speakers on campus. Above all, we were adamant that the talk would not be disrupted or canceled. There would be zero-tolerance for the de-platforming of Wisse or any other speaker.

I communicated all of this to Wisse, as well as Ungar-Sargon, well ahead of the talk. Neither gave any indication that our plan was unacceptable. I offered to be on stage as a second moderator to provide additional support, an offer which Wisse brushed off. “Braced by Yom Kippur,” she wrote in an email to me, as the conference was the day after the holiday, “we shall not be removed.” Ungar-Sargon made explicit that she expected she would be fine and that she would ask for help should she need it.

When the protest did arise, we did precisely what we said we would. Twenty students walked into the hall, stood silently holding signs with slogans, some with quotations from Wisse’s work. One, from an essay Wisse published in Commentary, in 1988, said that “Palestinian Arabs [are] people who breed and bleed and advertise their misery.” Others said “Zionism = Racism.”

At two points during Wisse’s talk, the protest became vocal. This violated college policy, and deans and security officers immediately escorted two individuals out of the hall. The total disruption was about one minute. Wisse then finished her talk, received applause and then the moderated conversation began.

At that point, the remaining protesters started singing protest songs in unison and were escorted out. The moderated discussion, including audience questions, took place without incident. You can watch it all here: we have nothing to hide.

What’s most important is to rebut Ungar-Sargon’s implication—one magnified by others on Twitter — that she was not allowed to speak. She wrote in The Forward that she “never got to say or do most of these things,” implying that she had been silenced. She said she “couldn’t proceed.” This is patently untrue. Rather, the next day, Ungar-Sargon chose to walk off the stage where she was supposed to give a talk.

Before she left, Ungar-Sargon did read a statement that many in the audience found moving and eloquent. As she was leaving, voices in the audience urged her to stay, including myself and her co-panelists. To see the Opinion Editor of The Forward voluntarily leave a conference on anti-Semitism and racism was astonishing. To now find her accusing the conference of silencing her is deceptive and disingenuous. Her 30,000 Twitter followers have carried her untruthful account across the Internet, and it is our hope that they will watch the conference on video to see how little Unger-Sargon’s account corresponds to what actually occurred.

I must reiterate: Bard College and the Arendt Center stood firmly against de-platforming and silencing. At colleges all around the country, controversial speakers are being de-platformed. Despite considerable pressure, we at Bard have never canceled a speaker. We believe that hearing controversial views is an essential part of thinking as well as a necessity in a pluralist democracy. We also believe that protest is an essential component of liberal-arts education because we believe it is an essential part of educated protest in our, or any, democracy.

In consistently insisting that we hear from a plurality of opinions, the Arendt Center honors the legacy of Hannah Arendt. “We know from experience,” Arendt wrote, “that no one can adequately grasp the objective world in its full reality all on his own, because the world always shows and reveals itself to him from only one perspective.” For Arendt, free speech is about seeing the world as it is, in all of its plurality and uniqueness, not as ideology suggests it should be.

In my own introductory remarks for the conference, I offered a grim list of hate crimes that have led to the murder of Jews, Muslims, Black Americans, and LGBTQ people over the last few years. I also explored Hannah Arendt’s understanding of the nexus between anti-Semitism and racism. And I ended with a call for the kind of liberal education that allows us to hear and engage difficult, sometimes controversial, opinions. It has been, and continues to be, my hope that we might be ennobled, not diminished, by that struggle.

In her speech at the conference before leaving, Ungar-Sargon accused me and other conference goers of sitting “idly by as Jews were protested for trying to talk about anti-Semitism.” This is flatly not so. What is? That she decided to go home and call the rest of us cowards.

Roger Berkowitz is the founder and academic director of the Hannah Arendt Center for Politics and Humanities at Bard College.

Letter to the Editor: I Organized the Bard Conference, and Batya Ungar-Sargon Misrepresented What Happened