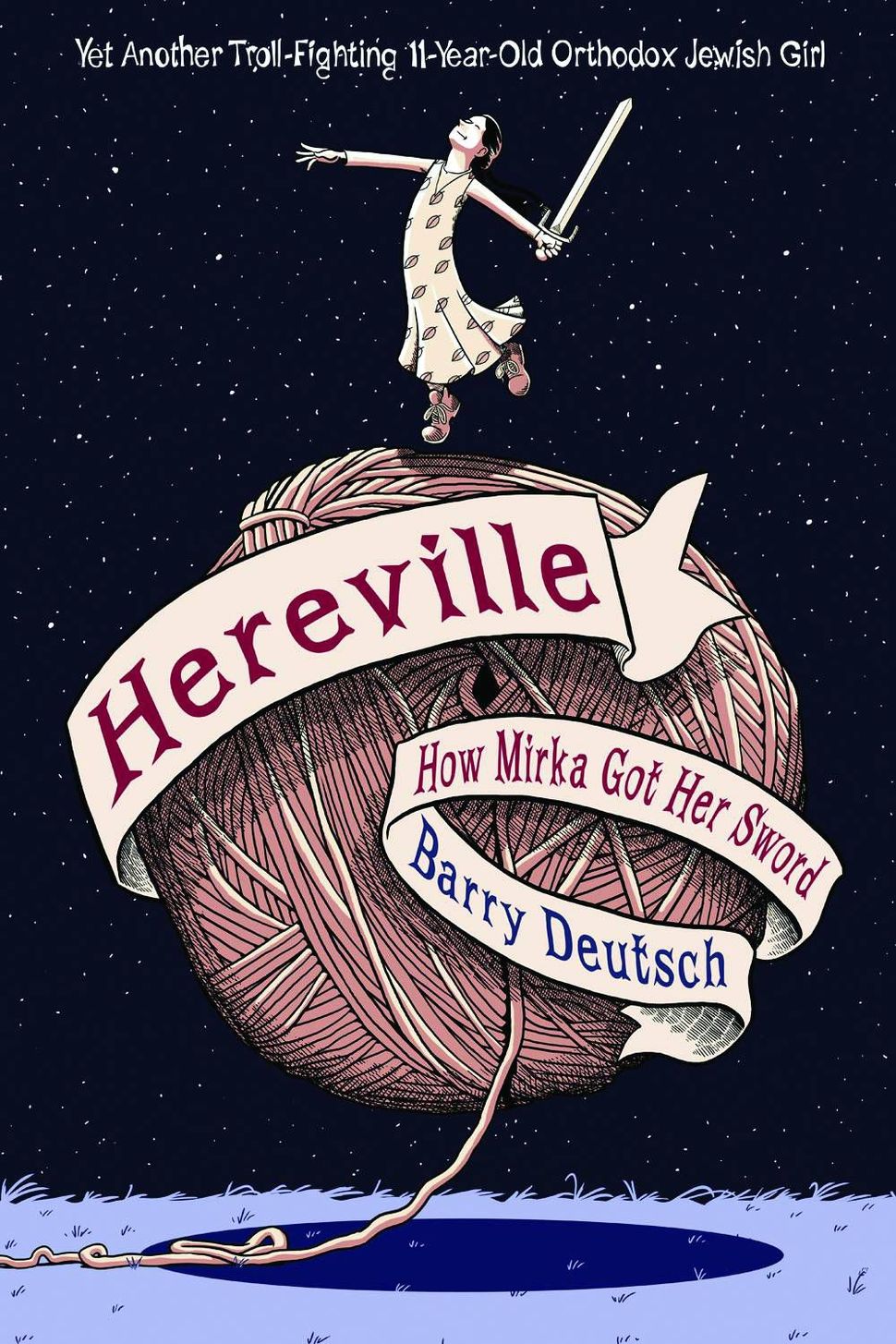 Written by illustrator Barry Deutsch, “Hereville” is the story of Mirka’s quest for a dragon-slaying sword. Originally drawn as a comic strip on Girlamatic.com, Deutsch recently developed it into a graphic novel.

Raised in the remote village of Hereville, Mirka lives with her father, stepmother, and eight siblings. Though her stepmother tries to instruct her in the “womanly arts,” including knitting and crocheting, Mirka has bigger dreams for herself that don’t include domesticity.

She wants to fight dragons.

After an encounter with a witch Mirka is given her quest, which to complete she must engage in a battle of skill and wit with a troll.

Though the book touches upon various customs and rituals of Jewish life, even casually incorporating Yiddish words and phrases (defined at the bottom of each page), Deutsch himself is not religious. “I’d describe myself as an atheist who’s culturally Jewish,” he said. Raised in a reform home, Deutsch went to Hebrew School and occasionally attended services, but “We were mostly ‘High Holy Day Jews,’” he admitted.

Though Orthodox Judaism seems an unlikely subject for him, Deutsch explained, “A lot of my favorite comics are set in cultures I’m not part of,” citing in particular the Latin-culture based “Love and Rockets” and “Usagi Yojimbo,” set in medieval Japan.

Deutsch’s interest in Hasidic Judaism came from reading Liz Harris’s “Holy Days.” Harris’s book chronicles her time spent with Hasidic Jewish families in Brooklyn and her impressions from observing and participating in their daily lives. “I read that about 15 to 20 years ago, but it really stuck with me,” Deutsch said.

Combining his curiosity about Hasidic culture with an uncompleted idea he had years earlier to retell the fairytale of St. George vs. The Dragon with a Jewish protagonist, Mirka’s tale was born.

Though Mirka is religious, Deutsch insists that he didn’t want to teach about Jewish life, but rather enchant and entertain with his story. “I don’t want to do a story where the most important thing to know about the character is that she’s Jewish. I want to do a story where she is Jewish, and that’s essential to her life and community, but that’s not what the story is about.”

Mirka’s life as a Hasidic Jew is a fundamental part of her character, but no superfluous attention is called to her religion.

“I definitely don’t want to write a textbook, but painlessly without lecturing people, give readers the impression of how Mirka’s life feels to Mirka,” Deutsch explained.

One of the most effective ways he accomplishes this is with the inclusion of Shabbat in the story.

Immediately after being charged with her quest, rather than set out, Mirka rushes home to celebrate Shabbat. For the next nine pages the action of the book is completely halted and the Sabbath is observed; its traditions described in detail. “The reason I have the story line pretty much stop dead and then pick up like snap when Shabbos is over,” Deutsch explained, “is because you’re supposed to put away your weekday concerns and not let them interfere with Shabbos, and I thought it was the most direct way of communicating that to the reader.”

“It’s a break from the other things going on and hopefully a really joyful break because of how special Shabbos time is to Mirka.”

Mirka’s sense of religious duty and the joy she takes in it, combined with her adventure-seeking personality, makes her a compelling character in children’s literature.

The catch line on “Hereville”’s cover reads, “Yet Another Troll-Fighting 11-Year-Old Orthodox Jewish Girl.” Though meant to be tongue-in-cheek, in many ways Deutsch’s character is just that.

By normalizing the rhythm and values of Jewish life, rather than singling them out as a topic for discussion, he manages to make Mirka just another adventure seeking pre-teen … who just so happens to be Jewish.