Swimming in the Sea of Haggadot 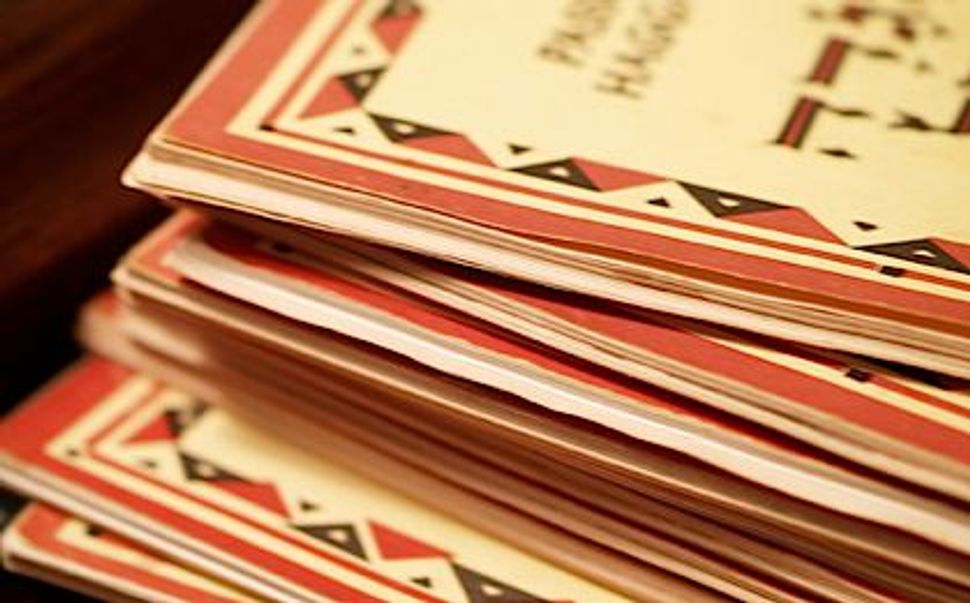 This year, or so it seems to me, the American Jewish community is awash in new editions of the haggadah, the age-old ritual text that structures the Passover seder.

At one end of the spectrum, there’s the stunning Washington Haggadah, a facsimile edition of a 15th century text. Its brightly colored illustrations of daily life — women stir the pot, an entire family crowds atop a horse, birds chirp, a jester beats a drum — dazzle the eye and enlarge our sense of wonder at the ways in which earlier generations of Jews claimed the haggadah as their own.

At the other end of the spectrum, there’s a brand new version of the Maxwell House Haggadah, whose very ordinariness belies its extraordinary hold on the American Jewish imagination. Households across the country may lack a Kiddush cup and perhaps even a set of Shabbat candlesticks, but chances are they own a copy or two of the unadorned and down-to-earth Maxwell House Haggadah, which has been around in one form or another since the 1930s.

These most recent iterations of the text are just the tip of the proverbial iceberg. If history is any guide, and I sure hope it is, American Jewry and its sister communities around the globe have, over time, generated any number of fascinating Passover texts, many of which can be found at George Washington University’s very own Kiev Collection.

Just the other day, in the company of Brad Sabin Hill, the curator of the Kiev Collection, professor Daniel Schwartz and the students in his “Bookmarks of Jewish History” seminar, I had the opportunity to examine, up close and personal, a stunning array of haggadot. Much like their former owners, they come in all sorts of shapes and sizes and sensibilities.

Berlin Jewry of the interwar years was represented by a handsomely illuminated haggadah with pop-up figures, a testament to its playfulness and sense of possibility. Soviet Jewry of the 1920s, in turn, made use of the text to savage, not salute, religion, transforming the seder into an occasion for renouncing Judaism and embracing Soviet ideals instead.

Elsewhere, kibbutzniks of the late 1940s took to the haggadah to sing the praises of collectivism. In a clever reworking of “Why is this night different from all other nights,” it allowed how, at the annual seder, parents and children ate together instead of dining separately, as was standard kibbutz practice.

And then there’s the Union Haggadah of 1907, whose orientation — it opened from left to right like an English language book instead of from right to left like a Hebrew book — proclaimed its modernity right from the get go. So, too, did its omissions. Within the pages of this rigorously contemporized ritual compendium, the Ten Plagues were nowhere to be found. Textual references like these, it was said, were “unworthy of enlightened sensitivities.”

Whatever your “sensitivities,” or, for that matter, your preferences in reading matter, here’s wishing one and all a joyous, lively and meaningful Pesach.

Swimming in the Sea of Haggadot