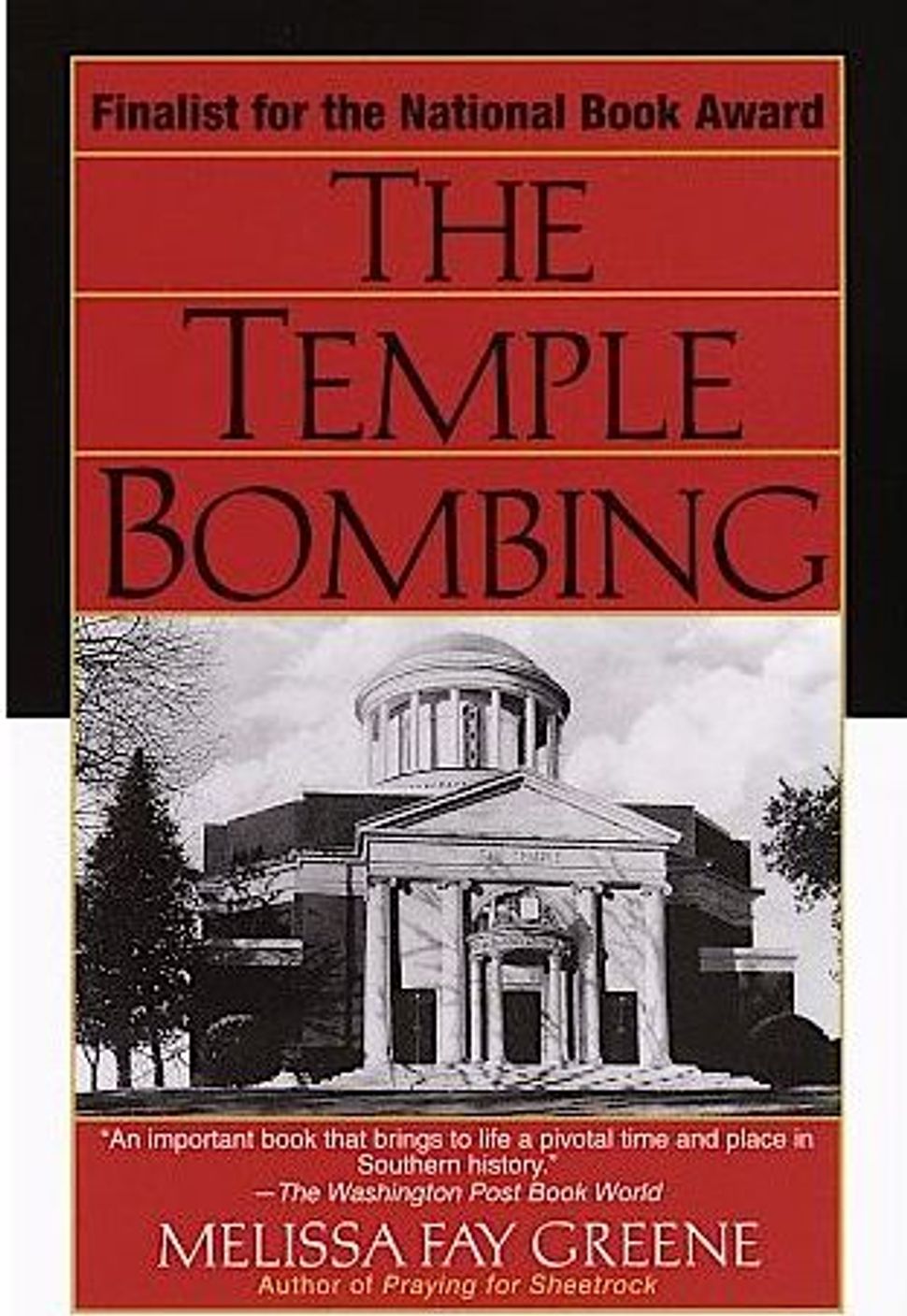 On Monday, Melissa Fay Greene shared the story behind the adoption of her daughter, Helen, from Ethiopia. Her posts are being featured this week on The Arty Semite courtesy of the Jewish Book Council and My Jewish Learning’s Author Blog Series. For more information on the series, please visit:

Twenty years ago, as I set out upon my very first book tour, for “Praying for Sheetrock” — my 1991 work of nonfiction about the heyday of a corrupt “courthouse gang” on the flowery coast of Georgia and the belated rise of civil rights there — I discovered I had a line in my book-talk that only Jews laughed at.

It was unintentional on my part. I thought it was funny; I didn’t realize until I criss-crossed the country with it, like a stand-up comic, that it wasn’t funny to non-Jews.

The scene: “The blazing summer nights of 1975, as darkness dropped…” when the rural black citizens of McIntosh County, enraged by the police shooting of an unarmed man and by the deliberate neglect of the all-black public school system by the all-white school board, stormed across the sand parking lot, illuminated by bare light-bulbs dangling from wires strung through the live-oak trees, and crowded into the weather-beaten Shorters Chapel African Methodist Episcopal Church.

I read aloud from my book: “Every pew in the church was packed; well-dressed people lined the walls and crowded into the rear of the church; and a choir in royal-blue satin robes led the congregation in rich and heartfelt music. The choir held hymnals without looking into them and swayed heavily back and forth in unison, stamping once as they leaned left, stamping again as they leaned right, and the congregation in full voice joined in.”

Then I told a story that was not in the book. “Whenever I attended one of these political prayer meetings,” I told my audience, “I was always seated up front, an honored guest, the only white person in the room. It was a disadvantage because I couldn’t really see what was going on, without constantly looking over my shoulder. One night the minister, to be especially welcoming to me, invited me to come up and lead a hymn. ‘Oh no, I couldn’t,’ I stammered, ‘for two reasons: first, I can’t sing like THAT, like these incredible voices. And secondly, I’m Jewish and I don’t know the words.’”

“’Welcome to you!’ cried the tall skinny perspiring coal-black reverend, dressed in a tight-fitting coal-black suit like a mortician. ‘The black and the white, the Greek and the Jew, we’re all children of Christ.’”

That’s when the Jewish people in my audiences laughed. From New York to Seattle, from Madison, Wisconsin, to Austin, Texas, Jews laughed at that line. If I heard one laugh only, I could glance up from my notes and spot him or her instantly: Of course, Mrs. Goldberg, there you are; oh, Dr. Stein, how are things here in Kansas City?

It wasn’t a funny line to Christians, though. It comes from Scripture (I learned, on the road), from the Epistle to the Colossians (as it was pointed out to me) wherein it is written: Where there is neither Greek nor Jew, circumcision nor uncircumcision, Barbarian, Scythian, bond nor free: but Christ is all, and in all. [Colossians, 3:9]

So I had to help my Christian friends see the humor. If I delivered the reverend’s line and no one laughed, I added: “I hadn’t ever heard it put like that before.”

I picked up a couple of chuckles here and there with that annotation, but it took another comment — “You know, that’s not what our rabbis tell us” — to really bring them home. Then everyone could laugh, because then they got why I thought it was funny and it suddenly struck my audiences as a funny scene after all.

My high point with that line occurred here in Atlanta, at Central Presbyterian Church located in the heart of old downtown. I gave my “Sheetrock” talk and delivered my “We’re all children of Christ” line and the entire audience exploded with laughter.

I was so stunned I couldn’t go on.

I came completely out of my author persona.

“But… but that’s a line that only Jews laugh at.”

I looked hard at them, through narrowed eyes. “Are there a bunch of converts from Judaism in this church?”

Now they were shrieking.

“I don’t get it,” I said. I stood quietly, waiting for an explanation.

“Melissa,” said the hip young minister kindly. “I think we are laughing because we understand why that was funny to you.”

In 1996, I went on book tour again, this time with “The Temple Bombing,” about mid-20th century white supremacist extremism and the 1958 attack on a Reform temple in Atlanta whose rabbi, Jacob M. Rothschild, was a fire-breathing advocate for racial justice.

Oddly, on this book tour, I ended up with a line that only Christians laughed at.

“We had a hard time coming up with a name for this book,” I told my audiences. “I wanted to call it “When the Wolves of Hate were Loose,” based on the Pulitzer Prize-winning column, denouncing the bombing, written by Ralph McGill of the Atlanta Constitution the morning after the attack.

“But my publisher said it was too long a title; they said I could call it “The Wolves of Hate.” But I said the book wasn’t about the wolves of hate; it was about a time when the wolves of hate were on the loose. Then the publisher said there were too many wolves on the bookstore shelves already — there were wolf calendars, wolf address books — so forget the wolves. Then my mother got into the act, because she loved the title. She said, ‘Sweetie, why don’t you just find a different animal?’”

“That’s when a friend came up with his great idea. ‘Melissa,’ he said. ‘Just call the book A Bomb In Gilead.’”

And that turned out to be a line that only Christians laughed at. Why?

Because (I learned) “A balm in Gilead” is a common phrase in the Christian church. There is a popular African-American spiritual and Christian hymn (I learned) that goes like this:

There is a balm in Gilead / To make the wounded whole;

There is a balm in Gilead / To heal the sin-sick soul.

Just tell the love of Jesus, / And say He died for all.

Meanwhile, Gilead has been used by black preachers to refer to the American South. So my friend’s punning book title, “A Bomb in Gilead,” worked.

But it happened, with my Temple Bombing talk, that I had reams of fantastic material that was mildly amusing to Christians, but really funny for Jews, about some of the traditions that emerged among the Classical Reform temples in the middle of the 20th century, like blowing a trumpet instead of a ram’s horn on Rosh Hashanah because a ram’s horn was too Jewish; or the High Holy Day Shrimp Fry in a Louisiana congregation; or the time an Orthodox fellow found himself in a Southern town with only one Reform temple in which to daven on Yom Kippur and when he began knocking on his chest during the Al Chet confession of sins people rushed to his aid because they thought he was having a heart attack.

So, I did this: I clipped together about six pages of my funniest stories for Jews and had them ready to go.

If, when I delivered the Bomb in Gilead line, there was widespread laughter among my listeners, I — while continuing to gaze smilingly upon my audience — subtly removed my paper-clipped pages and pushed them to the side, to be saved for another day.

But if the Bomb in Gilead line got no reaction, I looked out happily across my blank-faced audience, slipped my paper-clipped pages to the top, and prepared to give my fellow Jews a rollicking ride.

Now I’m touring with my new book, “No Biking in the House Without a Helmet,” my first truly light-hearted book, about raising our nine children: four by birth, one adopted from Bulgaria, and four adopted from Ethiopia.

I got into trouble with it my very first night out, the very first time I introduced material not from the book but from family life.

It concerned bringing 5-year-old Helen from her Ethiopian orphanage into our family and into Judaism. She’d lost both her parents in the vast HIV/AIDS pandemic and had landed in a evangelical Christian orphanage in Addis Ababa, where we found her. At 6 years of age, she sat between me and my husband at Yom Kippur services. I whispered to her the importance of this day. “Thousands of years ago,” I said, “it was on this day only that the High Priest stepped into the Holy of Holies inside the Temple and — on this day only — he pronounced God’s name. He was the only person alive who knew God’s name and these days nobody knows it.”

“You do?” whispered 7-year-old Jesse from my other side. “What is it?”

And Helen tossed her braids happily and pronounced in a voice loud and clear enough for all to hear: “Jesus Christ.”

Unfortunately I was 80% of the way into the telling of this story — I had reached “I know God’s name,” whispered the little girl — when I suddenly thought, What on earth am I doing?? this audience is three-quarters non-Jewish! this is not going to be funny!! I’m going to offend people!!

Frantically I tried to invent, on the spot, a different punch-line.

But once you’ve reached, “You do? What is it?” in that story, it’s too late to invent a new punchline.

There was no way around it; I had to go through it. “Jesus Christ,” I said miserably, now whispering myself, and then I briskly turned the page and began with religion-neutral material.

Now I look forward to touring amongst the Jewish Book Festivals this fall, with the confidence that — if there’s a story none of you finds funny — it may play very, very well in New Hampshire.

Melissa Fay Greene’s latest book, “No Biking in the House Without a Helmet,” is now available.