Q&A: Vanessa Hidary on Jon Stewart, Dating, and Being the Hebrew Mamita 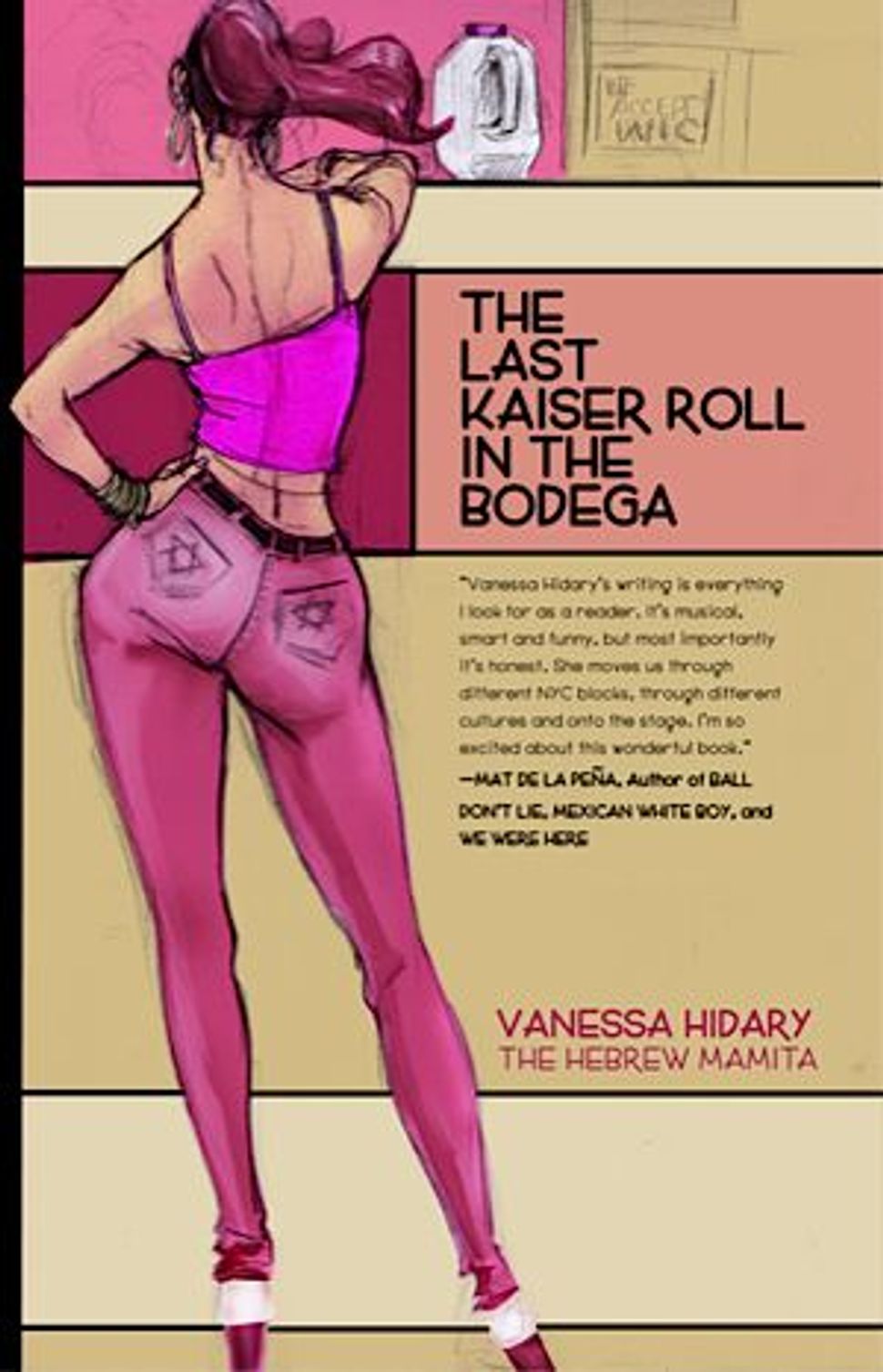 Those who appreciate Vanessa Hidary’s unique, fierce voice in her solo performances as the Hebrew Mamita can now enjoy her words in print, as well. “The Last Kaiser Roll in the Bodega,” Hidary’s first book, is a compelling compilation that paints a word picture of a bold Jewish woman ahead of her time. It is a well-organized collection of autobiographical poems, excerpts from her one-woman show “Culture Bandit,” childhood writing and memorabilia, and newly written long-form narratives. 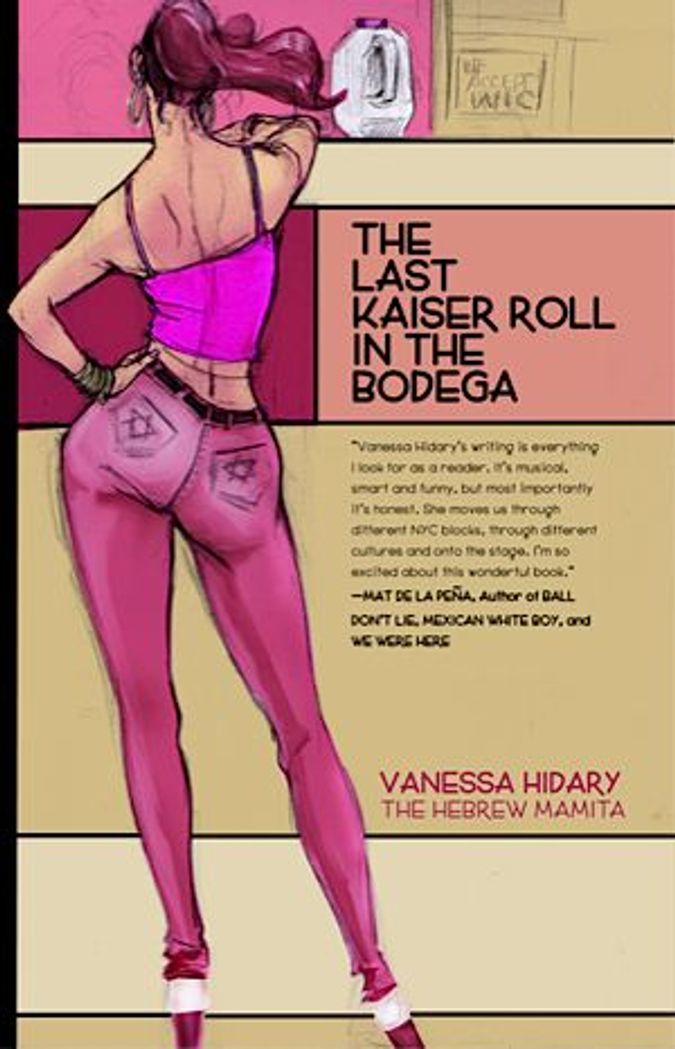 Much of “The Last Kaiser Roll in the Bodega” is set on the multi-cultural Upper West Side of Manhattan, where Hidary grew up in a liberal family of mixed Syrian-Russian descent. It is not hard to perceive the nascent Hebrew Mamita in the young Hidary, who attended local public schools and who — despite having attended Hebrew school and Jewish camps — socialized almost exclusively with Latino and African-American friends.

Hidary still lives on the same block where she grew up. Although known primarily as a spoken word artist, she prefers to be referred to as a writer and solo performer. The Arty Semite spoke to Hidary about Jewish comedy, the vicissitudes of dating, and being the Hebrew Mamita.

Renee Ghert-Zand: how would you describe “The Last Kaiser Roll in the Bodega?”

Vanessa Hidary: It is a kind of memoir anthology. I felt as though [my performed work] deserved to have its life on paper and live beyond my performing it. It also gave me an opportunity to write additional memoir stories that I couldn’t necessarily perform.

I call it a “collage memoir.” It includes pictures, childhood poems… It’s a scrapbook full of different things from my background… It gives a sense of who I am. My performances are very much a kind of collage, too.

Where is the title of the book from?

It was pulled from a line from one of my most famous poems, “He F*cked Me Like Brooklyn.” I see it as a play on many things. It has the Jewish thing in it, and it’s also a very New York thing — the Jew roll in the bodega. I dated the guy who owned the bodega on my corner for a few years, so there are a lot of associations. There’s also a lot about being a single woman and the heartbreak of relationships. I’m still there, I’m still one of the good ones waiting to be snatched up. Who’s going to get that last Kaiser roll?

What was the biggest challenge in going from performance to the page?

I was used to having no one looking at my written work, and I would just interpret it. It was really scary because I was afraid that it wouldn’t be able to live without my voice behind it. I’m kind a control freak about knowing how to perform my own work.

You recount studying for your master’s degree in acting. Do you see yourself going back to being a stage actress?

I think I was a really great actress. I found this niche that was very individual for me. I love performing other people’s material, and I miss being in the communal play experience. I truly miss it and hope that more of that work will come my way, because I love the experience of acting with other people.

How have you been received in the Jewish community?

Sometimes people have tried to make me a poster child and they have been highly disappointed. Just because I talk about being proud to be Jewish, sometimes there’s an assumption that politically I’d be a certain way, that I wouldn’t support interfaith marriage, that I would by now be living a more traditional life… I felt that there is some expectation that I’m not going to curse, that I’m going to be shomer Shabbes, that I can’t have any criticism of Israel. But in general, the communities have been very open to my voice. It makes me proud to be Jewish in this time.

Who inspires you Jewishly?

Jon Stewart is the first person to pop into my head. He is such a master of Jewish humor to me. I’m not sure people who aren’t Jewish would say that about him. I remember watching his standup something like 15 years ago, and he did a bit about being Jewish. It was for a very mixed audience, and he made it funny, but he made it socially aware, and I will never forget seeing that. I was like, “That’s what I want to do.” I want it to be smart, but I want it to be funny. I want to be proud of who I am, but also be able to poke fun at it at the same time.

Are Vanessa Hidary and the Hebrew Mamita one and the same?

It’s hard to say. Hebrew Mamita is definitely a lot of sides of me. The first thing that comes to my mind is when I’m dating a guy, I’m like, “If you think you are just going to be dating the Hebrew Mamita, you’re going to be in trouble.” Hebrew Mamita has sort of a superhero force to her. I would say that Vanessa Hidary has a lot more of a private side, a lot more of a sensitive side. I’m one of those people who when I’m off stage, I’m off stage. But since most of my stuff is autobiographical, I guess I am kind of the Hebrew Mamita, because I didn’t just create an identity and a back story. These are my stories.

Q&A: Vanessa Hidary on Jon Stewart, Dating, and Being the Hebrew Mamita