University of the Ghetto 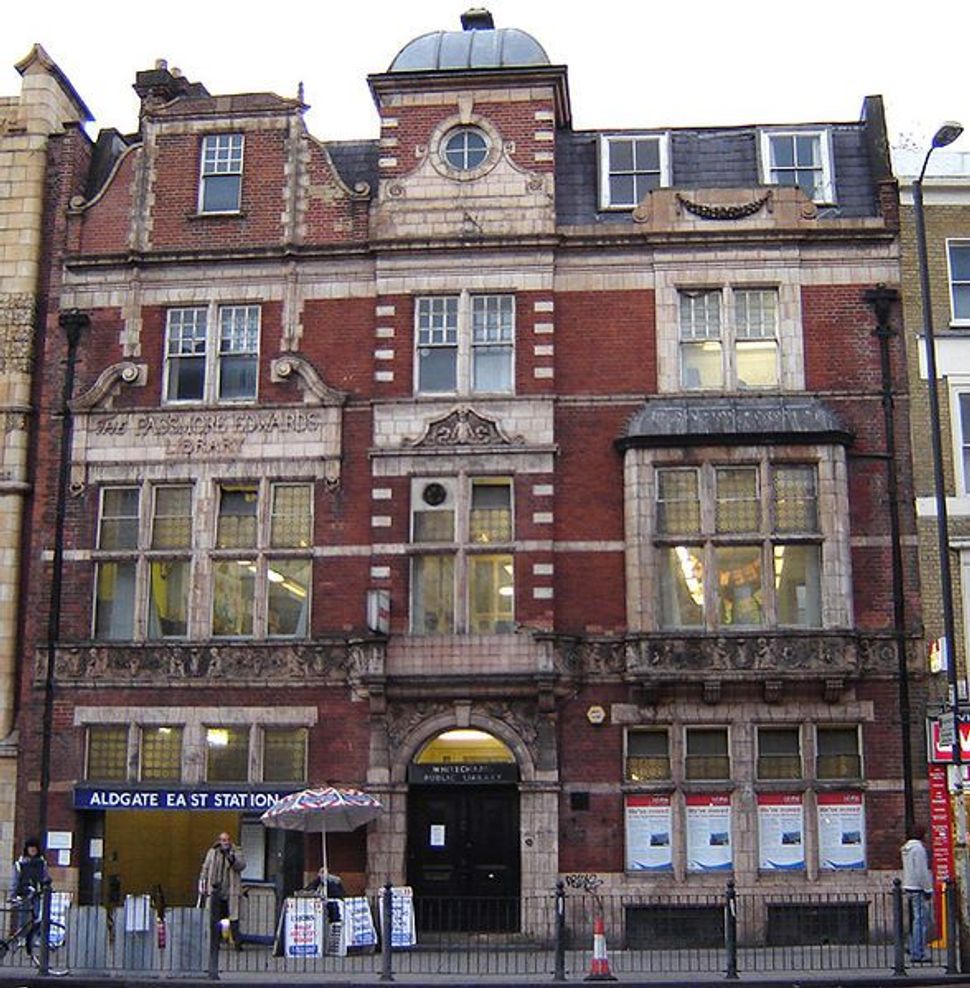 Gloria Spielman‘s most recent book, “Marcel Marceau: Master of Mime,” is now available. “Marcel Marceau: Master of Mime” won a silver medal in the 2011 Moonbeam Children’s Book Awards. Spielman‘s posts are being featured this week on The Arty Semite, courtesy of the Jewish Book Council and My Jewish Learning’s Author Blog Series. For more information on the series, please visit: 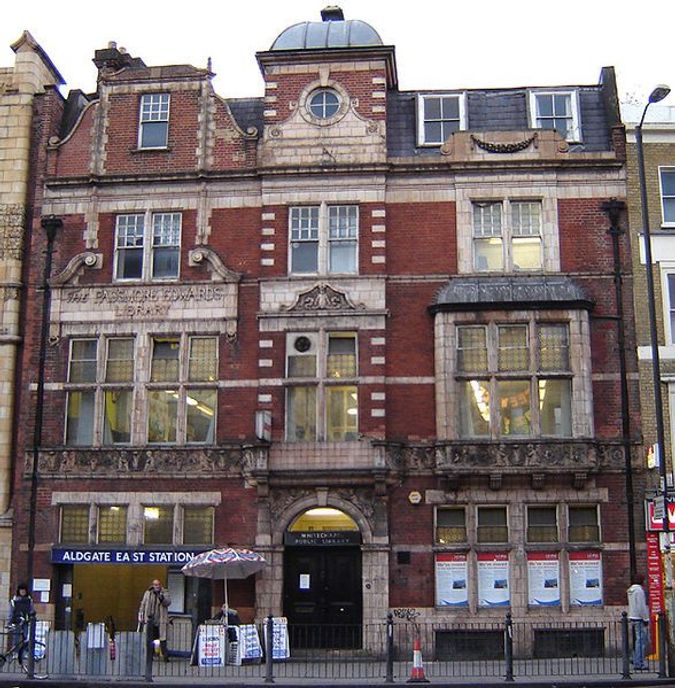 When I’m back in London there’s a building I like to visit. If you’re an art lover and you’ve been to London. you may know the place. It’s the Whitechapel Gallery in London’s East End. But it’s not the art that I go for, it’s the building itself. Or rather its new-old addition — the former Whitechapel Library.

The original gallery building opened in London’s East End in 1901. It seemed like an odd location. The neighbourhood was dodgy. Outsiders were scared to set foot in the area. In his book “The People of the Abyss,” writer Jack London tells of the horrified reactions of people when, in 1902, he told them he was planning on living there for a while. “You don’t want to live down there!” they said, alarmed. London fared no better with the good folks at Thomas Cook and Son, an English travel company that sent intrepid travelers all over the world and refused to take him a stone’s throw away, to the East End. “You can’t do it, you know,” they told him “It is so — ahem — unusual. Consult the police.”

Fortunately this was also the age of philanthropists with the winning combination of a zeal for social reform and deep pockets. Samuel Augustus Barnett, a social reformer and clergyman who’d moved to the East End, believed that the poor folks, native born and immigrants, in the crowded Whitechapel tenements deserved a library no less than Londoners in wealthier areas. He persuaded John Passmore Edwards, another social reformer, to dig into his wallet and fund a library for the residents of Whitechapel. The library opened in 1892. And what a library it was.

They called it The University of the Ghetto, and it acquired legendary status. The area was home to vast numbers of poor Jewish immigrants with a thirst for knowledge. Because of Jewish borrowers, the library built up the largest collection of Jewish and Yiddish literature in any British library. It was a refuge and meeting place for all sorts: radical thinkers, school children, dockers, office workers and down-and-outs. They browsed the shelves and sat at the wooden tables in the reading room. And the list of writers and artists who got their start at 77 Whitechapel High St. was long.

But times change. When it came time for me to join the library, it was the late 1960s and the writing was already on the wall for the Jewish East End. The Jews had started moving on to pastures suburban. The generation of writers, artists, scholars, scientists, doctors and lawyers who’d got their start at the library had made their way in the world. At age 5 I knew nothing of the legions of readers that had gone before me. But the day I stepped over the threshold of 77 Whitechapel High St. and walked past the glazed tile picture of the old Whitechapel Haymarket, the library worked its magic. Number 77 became my second home. I asked to be taken to the library at every opportunity. When I was old enough, I disappeared there for hours. You name it, I’ve read it. My favorite was Jewish literature. Like thousands before me, I sat at the wooden tables alongside all sorts.

Back home one university vacation, I returned to the library only to discover that Jewish literature had disappeared. The dwindling Jewish community had taken its toll ,and the books had been moved to the basement. “Not much call for them anymore, I’m afraid,” the librarian told me. “Would you like to see them?” Of course I would. The caretaker opened a door and led me down dark stairs into the library basement. It was a Jewish bibliophile’s paradise. I wandered the shelves of books and yellowing old newspapers in Yiddish and English. Many I’d read, some I’d been meaning to read, some held no real interest and others were in Yiddish, which I barely read, but still each book was somebody’s world. How many worlds were dumped here, underneath the feet of the pedestrians of Whitechapel High Street?

From time to time I would visit my books. It was wonderful down there in the basement. Just me and my books. Occasionally, a member of the library staff would pop his head in to check on me. In time, the library sold off the books to university libraries. I bought some. Today they sit on my shelves. Occasionally, when I have writer’s block. I’ll open one, just the smell of the old paper with its patina of thumbprints of generations of Jewish immigrants is enough to ignite the imagination again.

In August 2005, Whitechapel Library closed its doors after 113 years. It reopened a tube station away, as the Idea Store, a fabulous four-story building with thousands more books, a cafe, free Internet, a crèche and even a dance studio. I do believe Passmore Edwards would have approved.

The old building was bought by the Whitechapel Gallery next door. In 2009 it reopened as part of the gallery after a massive renovation. Not long after, I went to check on the old girl. The Haymarket was gone. The original stair case and balustrade up to the reading room remained. There was not a trace of the old dark basement. Instead of books, you’ll find brightly lit toilets and a baby-changing room. Up the in old reading room, the doors and windows looked just the same. And those old wooden tables were just as I remembered. I got to chatting to the young woman at the front desk. I mentioned I’d come to see the old library. “Funny, we’ve had a few people like you wanting to see the old library. Must have been a special place.”

I popped in again last month. Up in the old reading room on the first floor I shared my memories with the gallery archivist. He told me, “Some people come here and say they just want to stroke the tables.” Makes sense to me.

Check back all week for more posts from Gloria Spielman.

The Jewish Book Council is a not-for-profit organization devoted to the reading, writing and publishing of Jewish literature. For more Jewish literary blog posts, reviews of Jewish books, book club resources and to learn about awards and conferences, please visit www.jewishbookcouncil.org.

University of the Ghetto