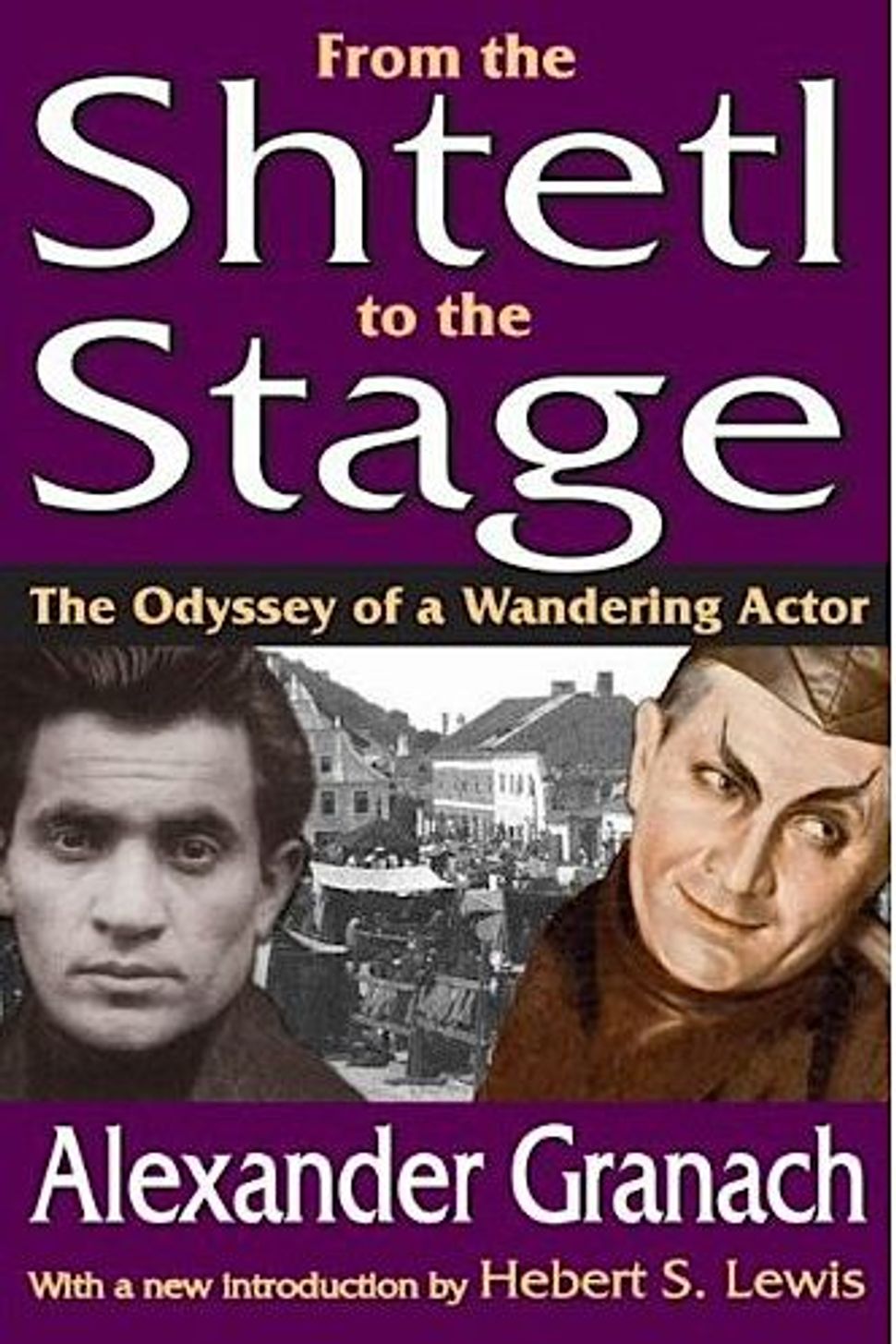 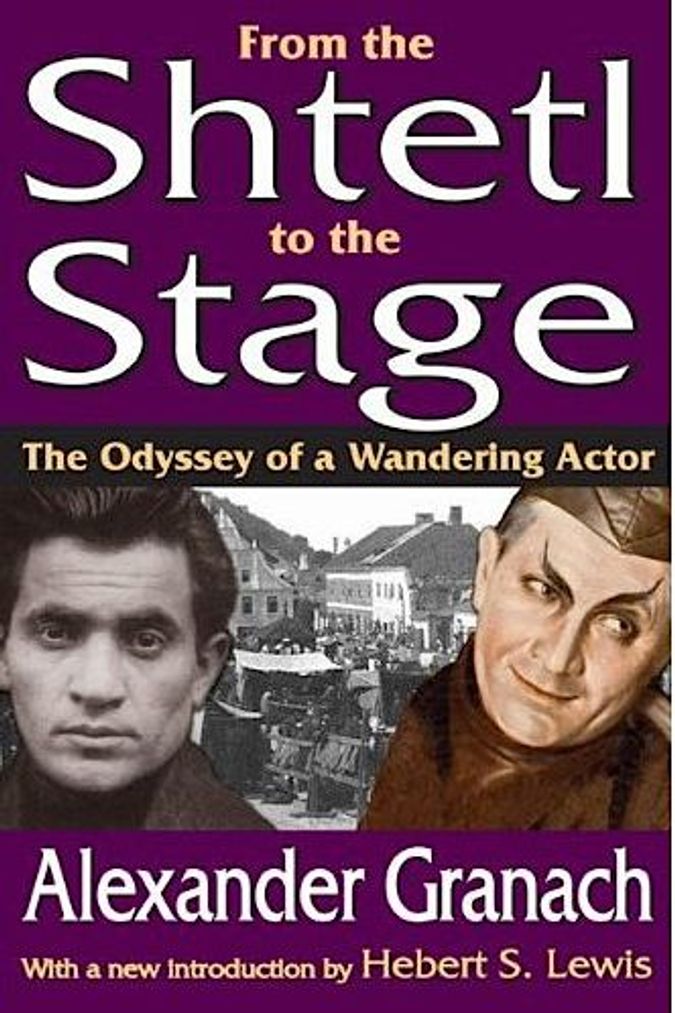 Actor Alexander Granach performed in Yiddish as a member of Berlin’s Jacob Gordin Theatrical Society early in the past century. He went from his shtetl in Galicia to Yiddish theater in Berlin, then to director Max Reinhardt’s acting school in the same city. As a Jew and man with leftist leanings, he fled Hitler’s Germany in 1933, and before his death in 1945 he performed in 20 Hollywood films, including Bertolt Brecht and Fritz Lang’s “Hangmen Also Die” and Ernst Lubitsch’s “Ninotchka.” He never became a film star; most of his roles were as a supporting actor. But Granach’s thespian achievements took him far from his beginnings in rural Kolomea and his early life as a bread baker, onto sound stages with some of the world’s most prominent film artists.

The story of Granach’s early life, an incomplete autobiography that ends at around 1920, was recently reissued under the title “From the Shtetl to the Stage: The Odyssey of a Wandering Actor.” Granach writes in great detail about his life among impoverished Galician Jews, his first girlfriends, fellow bakers and his early enthusiasms in theater. At 17 he dreamed of playing the role of Shakespeare’s famous Jew, Shylock. The dream, deferred while Granach fought as a soldier during World War I, was finally realized in 1919. The book ends with that achievement, still early in the actor’s career.

Were it not for Herbert S. Lewis’s informative introduction to the volume, readers might not know that Granach went on to befriend and work with many notable artists, including Heinrich Mann, Lion Feuchtwanger, David Bergelson, Else Lasker-Schuler, Bertolt Brecht, Erwin Piscator, Peter Lorre, and Elizabeth Bergner. If Granach had lived longer and written a sequel to this first installment of his life story, published in 1945, he might have offered valuable recollections of major European stage premieres in which he appeared, including now classic plays such as Frank Wedekind’s “Earth Spirit,” Georg Kaiser’s “From Morn to Midnight,” Ernst Toller’s “We’re Alive,” and Brecht’s “Drums in the Night” and “Man Is Man.”

Without accounts of those productions, Granach’s book seems unfinished. It opens with a lively survey of his early life in Galicia, but there are gaps in the early years, too. When a teacher tells him: “Yiddish is too limited. You must learn German and become a German actor,” Granach offers no argument, no defense of his native tongue; he simply admits that moving on to the German stage “had long been [his] secret desire,” and begins taking German lessons as soon as he can.

So this book is not all about Yiddish theater, but a few pages on that subject are almost worth the price of admission. Granach’s account of first seeing a Yiddish play (Gordin’s “God, Man, and Devil”) offers a fascinating and naive description of a now lost world, and certainly merits reprinting:

Down in front, beyond the first seats, there was a cloth wall, with a picture painted on it: A man dressed in nothing but a pelt was playing on a shepherd’s pipe; an almost naked woman, whose breasts were only half hidden by her hair, listened to his playing. Suddenly a gong sounded, the lights went out… And now the cloth wall rises…. Then we hear God’s voice, praising a pious Torah writer, Herrschale Dobrowner. And the devil incarnate laughs his grating laugh in God’s face and makes a bet with Him that he can tempt the pious Torah writer to destruction with money and wealth. And then the cloth wall goes down. What a world! What splendor!… We poor wretches live and die, and so it goes from generation to generation…. But here before your eyes, in three short hours, men and worlds and the whole of life change!

Granach’s enthusiasm for Gordin’s play leads him to dream of acting onstage. The first role he performs (in Yiddish) is that of the socialist advocate, Rubin, in David Pinski’s play “The Zwie Family.” Here again, the actor marvelously re-creates his enthusiasm in prose. Once cast in the role, he says:

I thought of Rubin and nothing else. No, not of Rubin, but as Rubin. I ate as Rubin, I slept as Rubin, I waked as Rubin…. Anyone I could catch underwent a Rubin lecture, a Rubin cataract. The rehearsals were exciting, electrifying…. The world itself was unimportant, was nothing but an excuse for Rubin, a stage prop for Rubin, had only to revolve around Rubin.

I suspect his immersion in the role of revolutionary was abetted by earlier study with a Yiddish anarchist group that formed the Jacob Gordin Theatrical Society, and was in turn inspired by anarcho-syndicalist Rudolph Rocker’s journal, “The Workers’ Friend.” But it was theater, not politics, to which Granach devoted himself most in this period. Later roles, particularly that of Shylock in “The Merchant of Venice,” received comparable dedication from the aspiring actor.

The book takes readers faraway from the stage, too, as Granach recounts his wartime military service in Austria and a harrowing medical operation that straightened his “crooked baker’s legs.” (Actors sometimes plan to “break a leg,” meaning “take a bow”; but Granach voluntarily had doctors break both his legs.) His encounters with anti-Semitism in the army and in theater kept him conscious of his Jewish background, onstage and off. When first offered the role of his dreams — Shylock — in postwar Munich, the play’s director informed the young actor: “You understand, with this play we want to take a poke at the Jews!” “Why?” Granach angrily asked in reply, and shouted that he is a Jew himself.

Never one to temper his emotions in the theater when a scene required them, Granach’s shout was so forceful that the anti-Semitic director “stumbled back and almost fell into the orchestra pit.” That is what I call great theater, even if it didn’t occur in front of an audience. Justice at last! If I had any doubts about Granach’s talent, that moment when his words almost drove the director into an orchestra pit persuaded me that this actor knew how to create a scene.