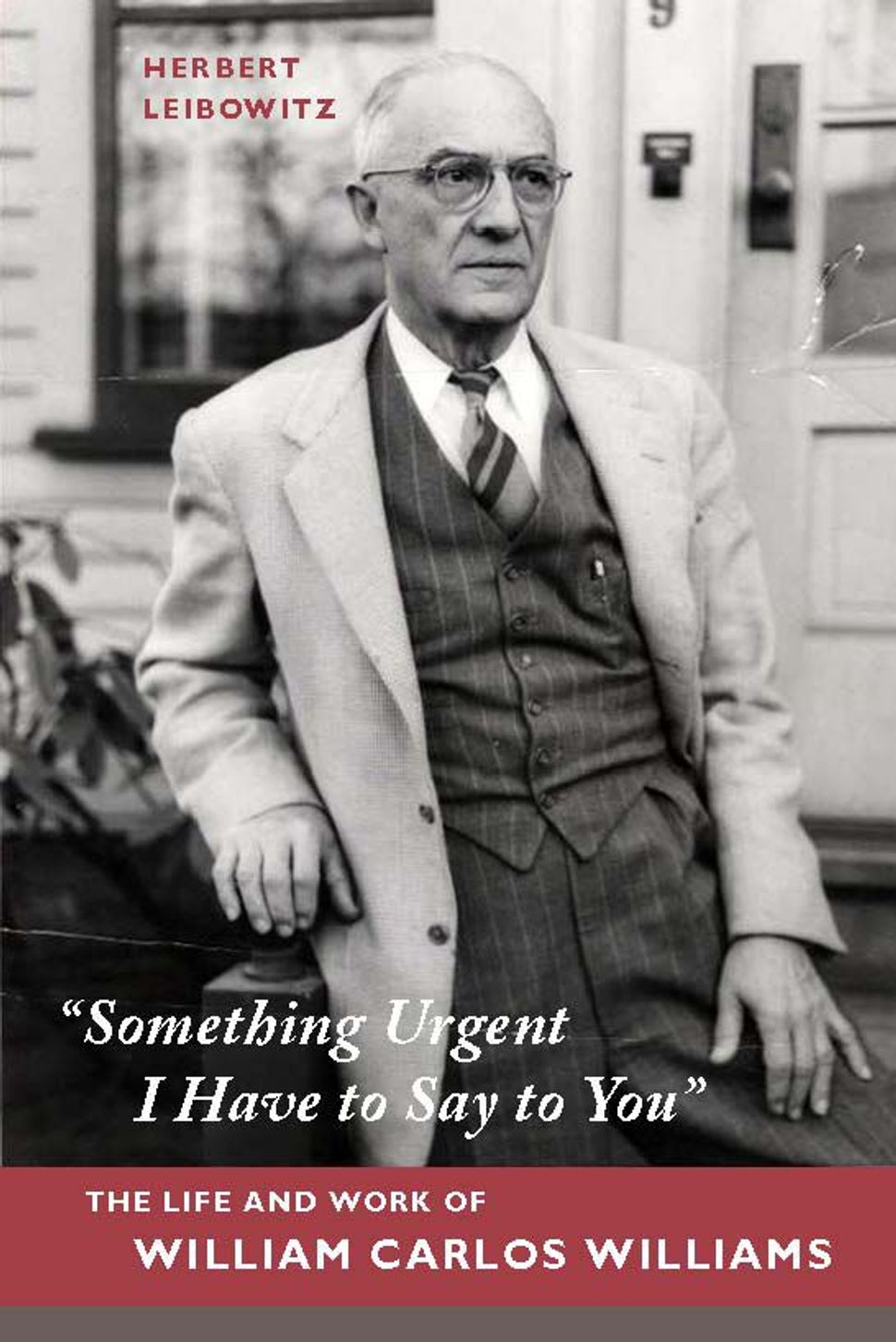 Something Urgent I Have to Say to You: The Life and Works of William Carlos Williams
By Herbert Leibowitz
Farrar, Straus and Giroux, 528 pages, $40.00 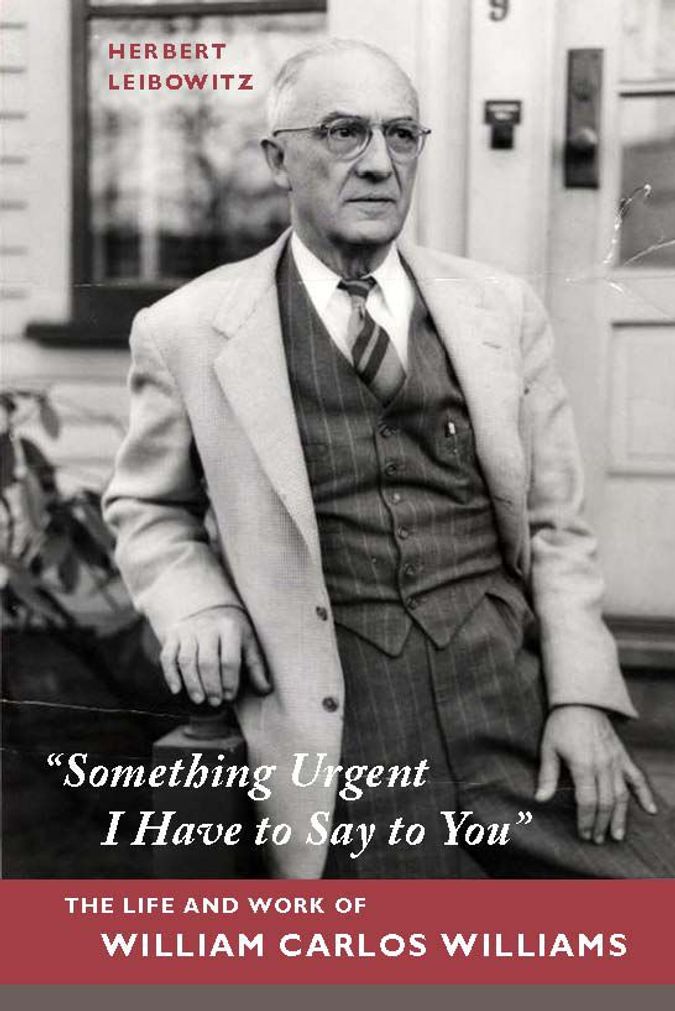 William Carlos Williams was a second-rate poet. Was.

These days, of course, he’s a towering figure of American modernism, the heir to Walt Whitman, the godfather of myriad schools of poetry, including the Beats, Black Mountain poets, confessional poets, esoteric poets and language poets. At the end of his long life, young poets made pilgrimages to see the Sage of Rutherford, N.J.

But in the beginning, he was considered a dabbler and dilettante compared to glamorous contemporaries like Ezra Pound and T.S. Eliot. While Pound was seen as an autodidact (he taught himself nine languages) and defender of civilization against the “barbarism” of the masses, Williams was seen as a part-time backwater scribe obsessed with capturing the chaos of the American experience.

Even after the Second World War, Williams couldn’t gain a foothold among the New Critics, whose formalist method of literary analysis thoroughly dominated English departments in the U.S. If students read Williams at all, they read him in high school. By the time students reached college, they were expected to get serious about poetry with a capital “p.” They read Eliot’s “The Waste Land,” which fit New Criticism to a T.

Of course, New Criticism was a political movement that strove to conceal its politics. By reading a poem as if it were written in a cultural vacuum, the New Critic was able to get on without the inconvenience of accounting for Eliot’s anti-Semitism or Pound’s fascism. Williams was taught the same way to poetry students for years, so it’s surprising to find out that he was the only American modernist whose politics were on the left.

“He had to,” Leibowitz said in a recent phone interview. “He was no ideologue by temperament but he was also a doctor. He had to be flexible. If a diagnosis did not work, you had to try another.”

Williams hated pharmaceutical companies and supported socialized medicine, but by and large his politics were pragmatic. They emerged from ministering to poor immigrant Italian and Polish families who lived and worked around Rutherford. He faced poverty, illness and death often and so developed a sympathetic worldview that challenged totalizing ideologies on the right and on the left.

“The Marxists writing in the Partisan Review thought the revolution would take place at any moment,” Leibowitz said. “But Williams dissented. He knew what working-class people were really like and argued that Marxism would never take hold in America. He was right.”

While doctors must adapt to reality (or else people die), poets of the day were expected for make reality conform to prosody: meter, form, rhyme, and so on. The obsessions of the Victorian era still lingered into the early decades of the 20th century. America still looked to England for models of artistic excellence, particularly in poetry. “His early poems sounded like they were written in 1809, not 1909,” Leibowitz said.

It’s hard to get one’s mind around that fact from the vantage point of the 21st century. Poems these days don’t need meter or rhyme to be poems. One might argue that we are so deconstructed that we can’t even define poetry at all anymore. So it’s worth remembering what Williams was facing: a poetry establishment that was eager to punish dissent from tradition even as it professed to embrace the modern and new.

Pound was always hectoring Williams to leave the U.S. and come to Europe. But William rejected the expatriate life embraced by other modernists. Only in America could he write poetry the way Cubists painted paintings — by liberating color, sound and texture from their conventional moorings. This came naturally to the son of immigrants (his father was English, his mother of mixed ancestry, including Jewish). America was his subject (like Whitman) and America’s melting pot of languages was his raw material.

So when Pound helped Eliot publish “The Waste Land “ in 1922, it was more than personal betrayal (Williams and Pound were college “frenemies,” you might say) — it was a betrayal of ideals. Williams believed “The Waste Land,” with its endless allusions and arch-conservative malaise, stood for everything modernism stood against. Yet Eliot’s epic became the centerpiece of every college course in modernist poetry, and Williams’s epics — “Spring and All” and “Paterson” — became background against which “The Waste Land” could be better understood.

Even so, history has been vindicating. There are still formalist poets practicing in the Eliot vein, but most American poets owe a debt to Williams. Sure, he was often insecure, but what did he expect when he was going places no poet had gone before?

“It must be fearful to have done something with deadly originality and lucidity and beauty, and then be ignored, scolded, patronized!” wrote the poet Robert Lowell, whose letter to Williams is quote in “Something Urgent I Have to Say to You.” Leibowitz put Lowell in a short list of poets influenced by Williams. Others include Allen Ginsberg, Robert Creeley, Frank O’Hara, Denise Levertov and Robert Pinsky.

Not bad for a poet some considered second-rate.