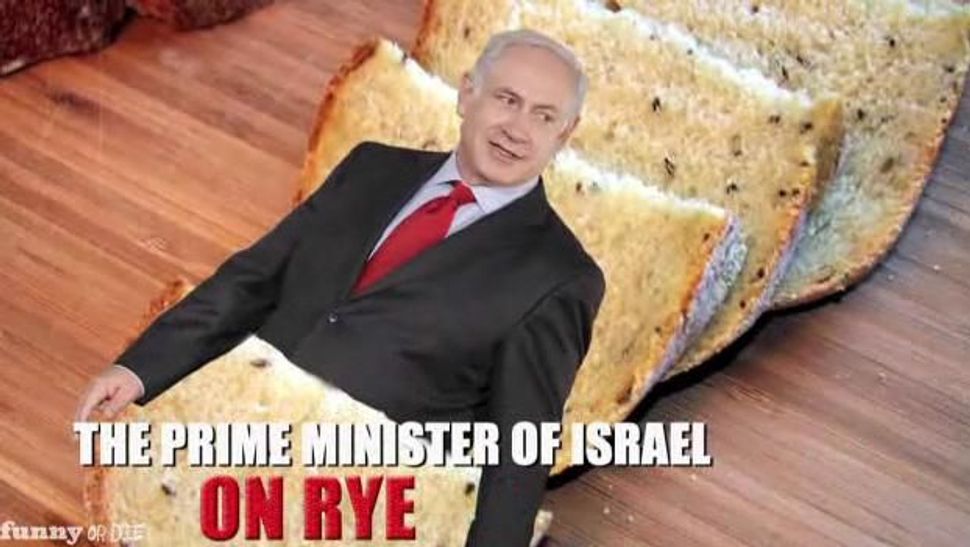 What’s Prime Minister Benjamin Netanyahu doing in a trailer for Adam Sandler’s new movie? And what is he doing in between some slices of rye bread?

These are the lingering questions one has after watching a Funny of Die advertising spot cut by Andy Samberg, who also stars in “That’s My Boy.” The film is about a young teenage boy named Donny (Sandler) who fathers and raises his son Todd (Samberg) until Todd is 18. The immature, deadbeat dad later shows up on the eve of the successful son’s wedding, and all hell breaks loose.

Samberg’s video begins as a play on the similarity in sound between his and Sandler’s name. After he jokes about this, he riffs on the names further by claiming that the film also stars Adam Lambert, Adam Lamberg, Shmandy Blanderberg and Shmadam Flanderberg, Ryne Sandberg and Ingmar Bergman. Oh, and there’s also Rabbi Jewman McShwartzmangoldbergstein and Adam Goldberg’s eyebrows.

Then things go completely off the rails around the 1-minute mark, at which point the video tells — and shows — us that the film also stars “the Prime Minister of Israel on rye.” A Bibi sandwich is neither tasteful nor funny — and the Shmooze doesn’t have high hopes for the movie, either.