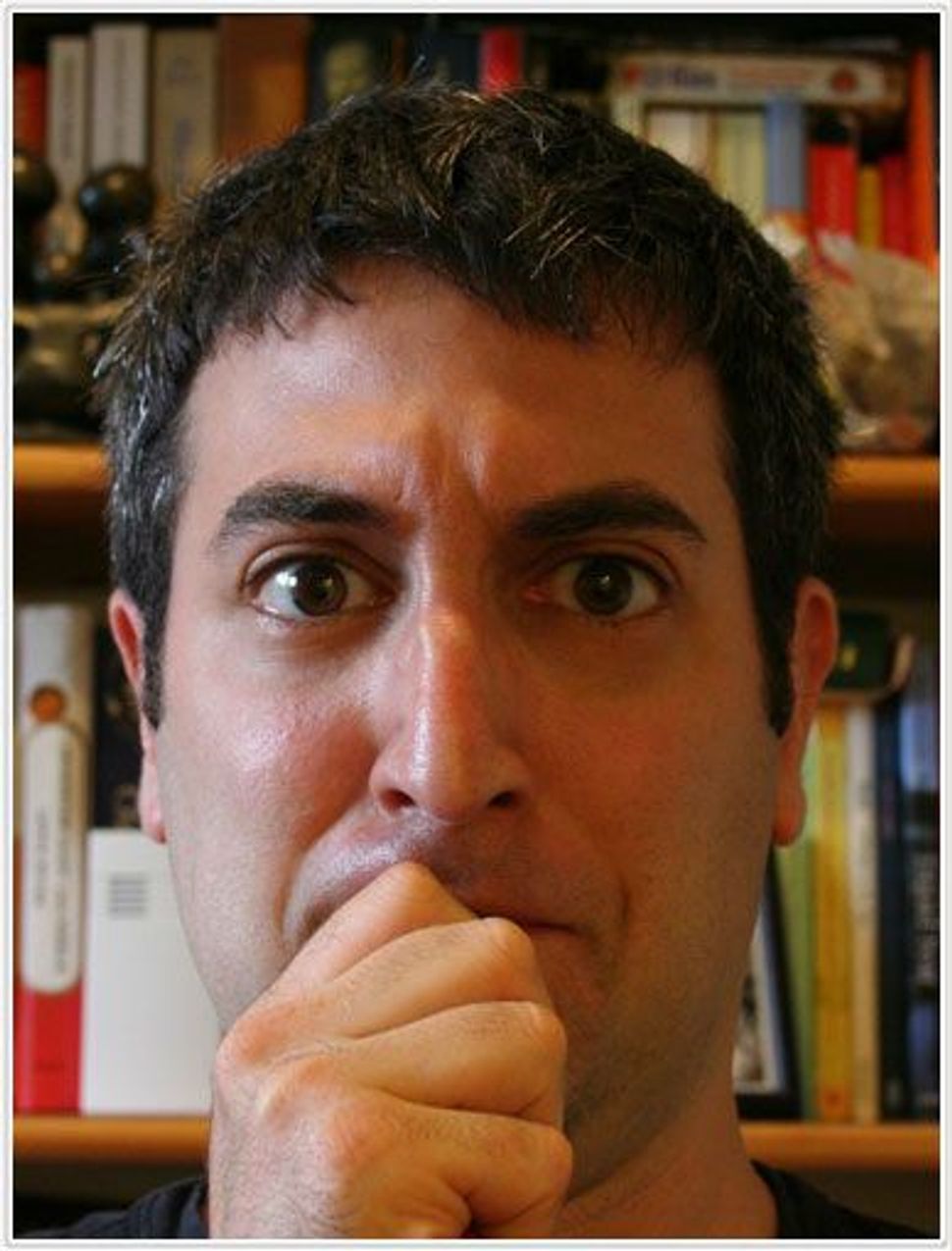 Image by Courtesy of Dan Smith

Dan Smith’s second book, “Monkey Mind,” is a warm and painful look into his life-long struggle with anxiety and paradox. The same dogged interrogation of his psyche which antagonizes and often undermines him is redirected here in service of understanding and healing. What results is a patient, emotional and often funny catalogue of how he became such a mess of insight. The Arty Semite caught Smith on a good day, as he was gearing up for the book’s July 3 release, and as he made his daughter lunch.

Micah Kelber: I called you from a blocked number. What were you thinking before you answered the phone?

Dan Smith: I get excited by blocked calls because it means something official is coming through. I get anxious when someone I know is calling and then I might have to talk to them longer than I want to and then I have to worry whether they hate me when I get off the phone.

Who is the least anxious person you know?

Woody Allen. I am not pulling your leg. After seeing the documentary that recently ran on PBS, I was struck by how staid and stable he actually is. He has an ability to compartmentalize. Although he is the best at portraying anxiety, he is not actually anxious. Also, anxiety paralyzes a person. He has been a stand up comedian, written books, made excellent films — the guy never stops working and that is because he is able to push away his concerns. Discipline is the antithesis of anxiety. His anxiousness is a pose. I certainly don’t have the ability to compartmentalize. I have one compartment and it is a mess in there.

Are Jews more anxious than other people?

Jews are not more anxious than other people, but they are far better at presenting elements of anxiety. The Jews have done a fabulous job at illustrating and dramatizing the problems of anxiety. That said, Jews are predisposed to have a good grasp of anxiety, because the experience of anxiety is so close to the style of the disputation argumentation, self argumentation, paradox, constantly hashing things over and looking at things from every angle, the way Jews do. Also, anxiety is something useful in keeping us protected from threats. Many years of experience of being threatened has led us to spend more time considering the predicament of exile and persecution, making us anxious, but also able to respond to the threats.

What threats do you feel personally?

What brings you relief?

Cognitive Behaviour Theory (CBT), which helped me to form new habits of thinking, habits that don’t lead me down the path catastrophizing, perfectionalism, or the melodramatization of petty concerns. Also, Zen meditation, which asks you to be vigilant and aware of your thoughts, to be mindful of what is in your head, instead of letting your impulses rise up. The difference between the two is that opposed to in CBT where you are asked to take the thought and question it, scrutinize it, and apply logic to it, in mediation you take the thought and let it go.

Yes, I have often worried about my attraction to these two disciplines that are at war with one another and that by using both of them I am causing myself anxiety. I comfort myself with the thought that the common thread between the two of them is the practice of mindfulness — the most important ingredient in mitigating anxiety. Anxiety happens so quickly, automatically. You feel a sensation in your body that happens because you have spoken to yourself — you have made yourself that. There is a causative act, and being aware of that is the most important thing. Whether you learn to diffuse those anxiety-provoking thoughts by learning how to let go of them or by applying logic may not be as important as being aware. I think that’s an important point and I haven’t exactly squared the circle yet.

What are you trying to do to me? A figure of speech!

What is your definition of anxiety?

Are there things that bring everyone anxiety?

Death is probably the one patent universal anxiety — but to be anxious about death is useless. And most people experience anxiety about how they are perceived socially, except for maybe Bob Dylan and Queen Elizabeth.

What kinds of anxiety are you most drawn to?

The aggressive, combatative ones — the ones that aren’t ameliorative. The Philip Roth kind that rails against the condition it is in. It is a muscular form of anxiety. The one that says, “I am confused and I am pissed about it and I am angry at you for making me anxious.” I want to be a good boy from my ethnic background and I want to be a mensch and still I want to be free.

Since the Germans seem to have a word for everything, is there a German word for the anxiety one feels when meeting a German?

Your book is very funny, but also painful. Does seeing people enjoy your book bring you anxiety?

Anxiety is the only funny mental disorder. It’s absurd — it can destroy lives and relationships but it destroys them with utter logical absurdities. It’s like a monster in a bad B-movie. It seems terrifying but the fangs and the fur are all fake, they are all paper maché.

What will you do for your daughter if she suffers from anxiety?

I will tell her it takes daily effort and there is nothing that I as a parent or anyone can do for her. There is nothing truly productive that someone else can do for someone who has anxiety. A person can give guidance and empathy but the solution is individual. This can be a painful thing for a parent who wants nothing more than to ease a child’s suffering.