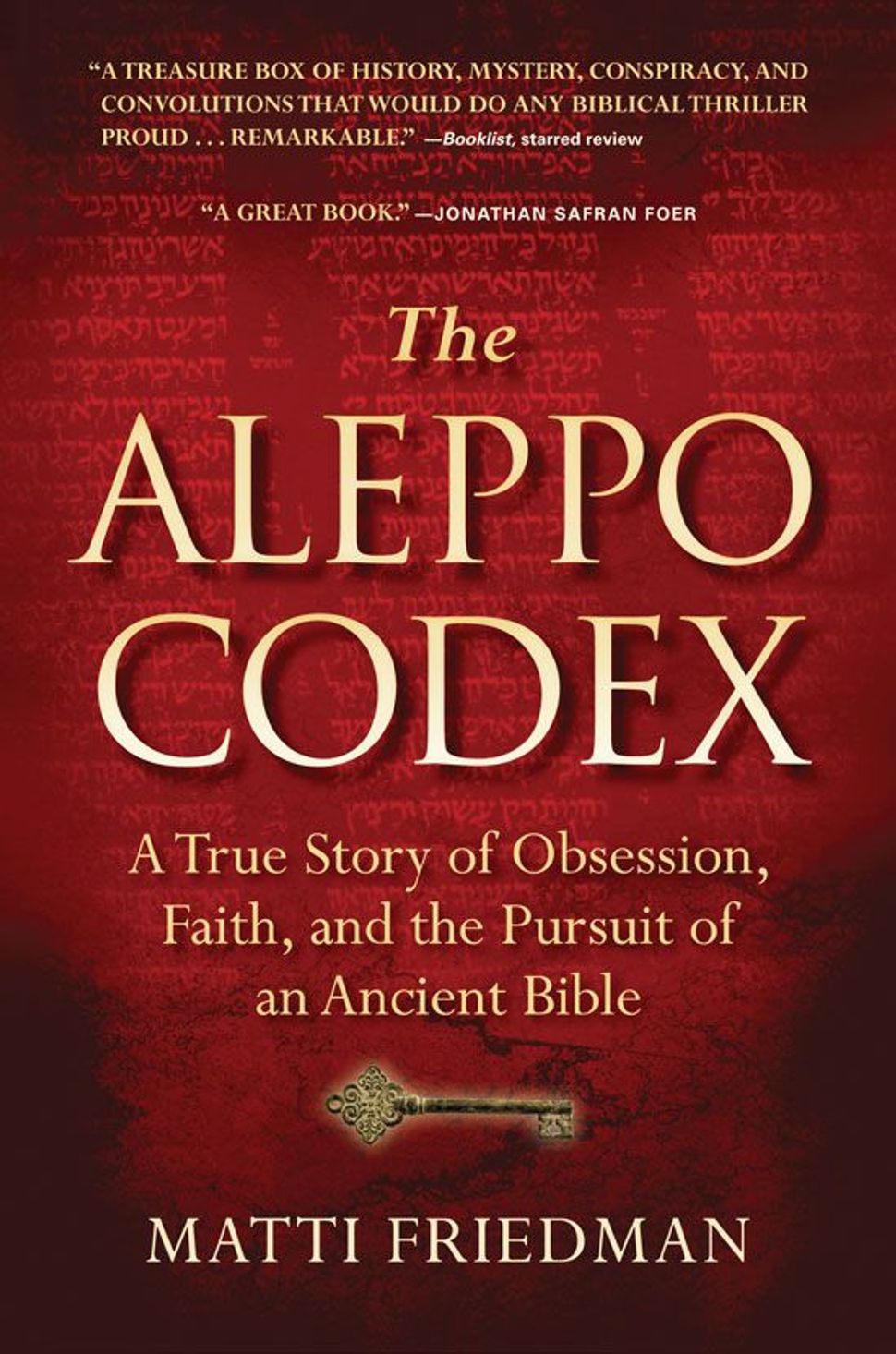 Earlier this week Matti Friedman, a reporter in Jerusalem for The Times of Israel, and author of “The Aleppo Codex,” wrote about the codex vs. the Kindle. His blog posts are featured on The Arty Semite courtesy of the Jewish Book Council and My Jewish Learning’s Author Blog Series. For more information on the series, please visit: 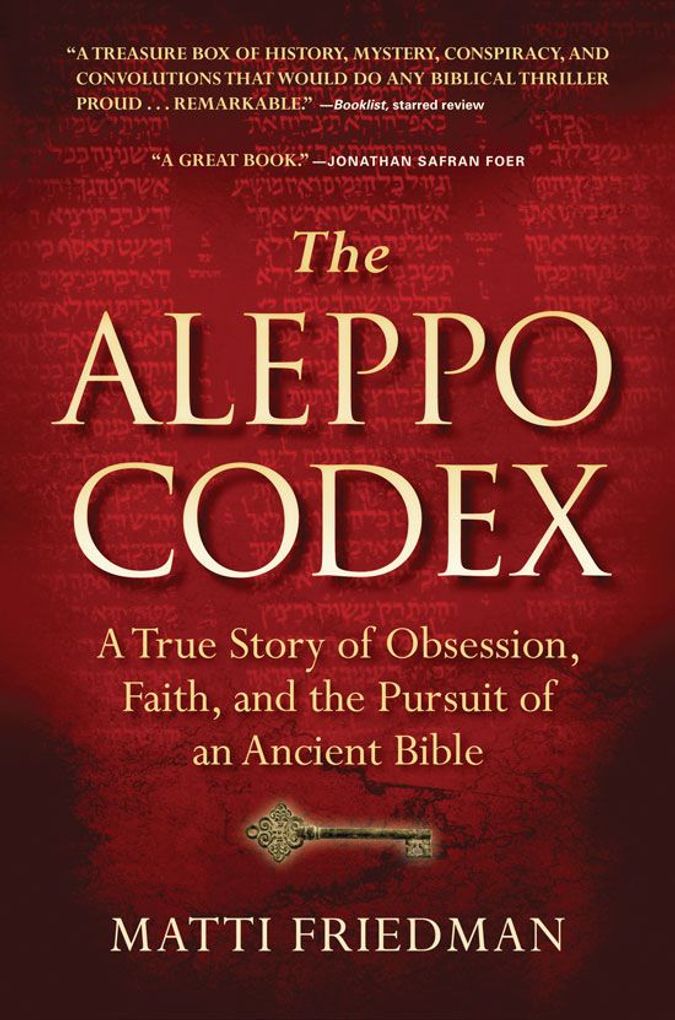 Having just spent four years on a book about the biblical manuscript known as the Aleppo Codex, I can say with some certainty that some of the most important things I learned had nothing to do with the codex at all, but rather with the people who guarded it. I came to think of this as a hidden history behind events in the Middle East.

The Jewish community of Aleppo, a trading city in northern Syria where this manuscript was kept in a synagogue for six centuries, was one of the communities we sometimes think of — to the extent that we think of them at all — as belonging to the lands of Islam. But Islam came to those places only long after the Jews were already there; the Aleppo Jews, for example, were in the city roughly a millennium before Muhammad preached in Arabia and before his adherents arrived in Syria. In Aleppo, and in many cities throughout the Middle East, the Jews were natives in a way that those of us of European descent, with our transient ancestors, can hardly imagine.

On November 30, 1947, mobs in Aleppo incensed by the UN vote the previous day to partition Palestine attacked the city’s Jews. I interviewed people who remembered the rioters torching synagogues, making piles of Hebrew manuscripts, prayer shawls and phylacteries and setting them alight. Like a different wave of riots in Europe nine years before, this one was a harbinger of the end for a Jewish way of life: Today, Jewish Aleppo has vanished; its residents were among the 850,000 Jews forced out of their ancestral homes in Islamic countries.

Two Jewish worlds came to an end in the 1940s. We are familiar with the first, which many of us think of simply as the Jewish world: Jewish humor, Jewish cuisine, Jewish writing — all of these terms apply, in North American parlance, to the Jews of Europe. The Jewish world of the Middle East included fewer people and ended in less cataclysmic circumstances. But it was just as Jewish and just as important, and it is just as gone.

In discussing the modern state of Israel, the Jews of the Middle East are often mentioned as a kind of curiosity, an aside in what we tell as a European story — pogroms, Herzl, Zionism, the Holocaust. In this story, Jews and Arabs first encountered each other in the late 19th century; we imagine the Russian-born pioneer encountering the Arab fellah on the rocky soil of Palestine. But that isn’t true, and the Jews who had always lived in the Middle East are not a footnote.

When Islam began in Arabia, Jews were there, and when the first Muslims began spreading to cities across the Mideast, they found Jews there as well. Jews were recognized by Islam as a protected, second-class ethnic group, dhimmi, sometimes persecuted, sometimes tolerated. They were generally considered to be effete and without honor. In recent years it has become common to speak of the Muslim Middle East as a haven in which Jews thrived, but this is nonsense; the Islamic world owes its good reputation in this regard to Europeans, who set a standard for mistreatment that is impossible to match.

Jews had existed in the Muslim imagination for many centuries by the time the first Zionists arrived in the Middle East, and the place they occupied in that imagination made the Zionist project problematic in ways that are still playing out. Jews were inferior to Muslims by definition. They were weak, a subject community, and that made their success in Palestine impossible to accept: Being beaten and outsmarted by a powerful empire like Britain or France was one thing. Being beaten and dominated by Jews — as Arabs were, again and again, before 1948 and in subsequent wars — was a humiliation that simply could not be accepted. It was like being beaten by a girl. The depth of this humiliation, which lies at the root of today’s conflict, is something Israel and its supporters have too often failed to appreciate.

The dissonance between the very old Muslim perception of the Jew and the reality of the 20th century came to be explained in the Arab world by turning to conspiracy theories. Jews could not have beaten Muslims fairly; they were nefarious, and here Europeans had plenty of material they were happy to share, and which was translated into Arabic and still enthusiastically circulates across the Middle East. (I have encountered the Protocols of the Elders of Zion at otherwise normal bookstores in Istanbul and Cairo and in an academic bookstore adjacent to the prestigious American University of Beirut.)

By the 1950s, most of the Jews of the Middle East were concentrated in Israel, and they played a central role in forging the national life of the country. And yet it has been convenient for all parties, Israelis included, to describe Israel as a European enclave. For Israelis, this claim allows them a sense of superiority. For the Arabs, it allows the erasure of the fate of their own Jewish communities and enables them to portray Israel as a Western invader. It has become cliché, for example, to note that hummus and falafel and other Middle Eastern foods that Israelis consider to be Israeli are in fact a native cuisine appropriated by newcomers. This only makes sense if you don’t understand that fully 50 percent of Israel’s Jews are the people who were kicked out of Islamic countries or their descendants — the cuisine of the Mideast, of course, belongs to them and their countrymen as much as it does to anyone else. When we look at Israel and its neighbors, and at the last Jewish century, we would benefit by restoring this missing history to its place — right at the center of the story.