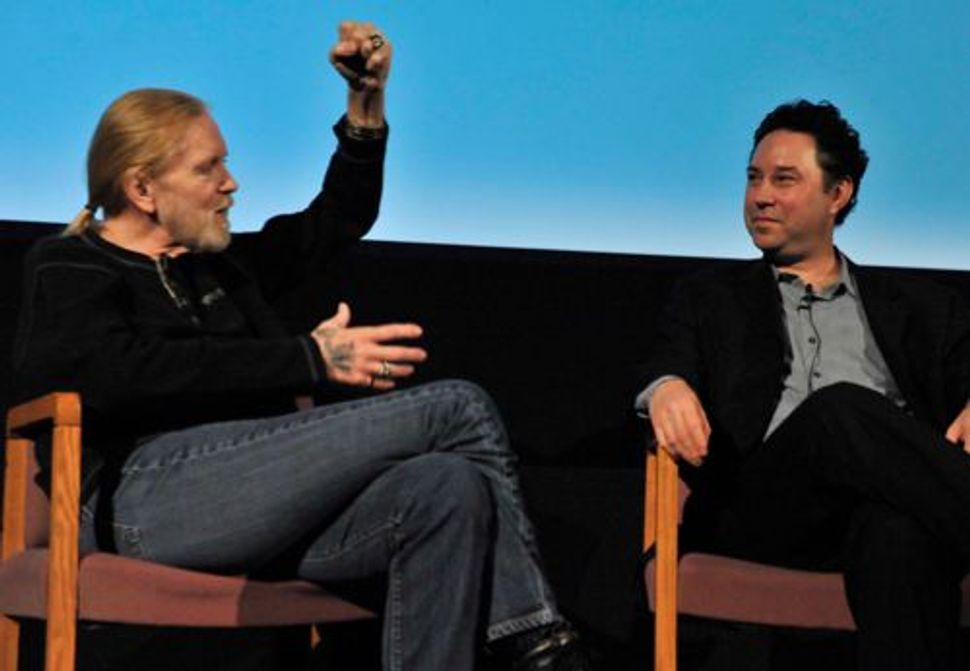 In a “grizzled, laconic drawl,” wrote Gregory Cowles in The New York Times, Gregg Allman’s recently published autobiography, “My Cross to Bear,” provides a “rambling backstage account of five decades with the Allman Brothers Band.” But it’s Allman’s Jewish co-author, Alan Light, who translated the rock legend’s rough-hewn tall tales of excess into “crisply ironed” prose. A music journalist since high school, Light, 46, was founding editor of Vibe magazine, served a stint as editor of Spin, and has written acclaimed books on the Beastie Boys, hip-hop history and Tupac Shakur. A go-to pop-music correspondent for outlets like The New York Times and Rolling Stone, Light is also director of programming for the PBS concert series “Live from the Artists Den.” He lives on the Upper East Side with his wife, Suzanne MacElfresh, and their nine-year-old son Adam. The Arty semite caught up with him in New York City.

Michael Kaminer: Your immersion in hip-hop doesn’t make you seem like a natural fit for a book by Gregg Allman. How did the gig come about?

Alan Light: When I was at Rolling Stone, before I went to work on the Vibe launch, I wrote the Ice-T cover story, but I also wrote cover stories about Neil Young and U2. As I’ve grown older, and felt like a lot of hip-hop really is directed at a younger audience, I’ve found myself feeling more comfortable writing about older artists — and also, that there’s often more chance to write about them, because the staffers at places like The New York Times and Rolling Stone are more eager to write about the hot new thing.

When you’re writing a book in someone else’s voice, what is the process like? Do you just take dictation and clean it up?

It’s a little more extensive than that. Gregg had already taken stabs at gathering his story over the years — about 10 years ago he had started to sit with one of the Allmans’ crew and go through his life on tape. So the first thing I got was a few hundred pages of transcripts, to see what was in there, what was usable, what was missing. I started to go through that, edit it and assemble it into a skeleton, and then start to determine what we still needed. Since we were under such time pressure to deliver the book — I had about eight months — it helped that I could go into each session with Gregg with a strategy, a specific target I was trying to fill in, and piece by piece, connected all the dots to give the complete story.

My task, of course, is to be as invisible as possible, to make it feel as consistently in Gregg’s voice at all times and give the reader a real sense of hearing this story directly from him. I like jigsaw puzzle projects like that — my Beastie Boys book was an oral history, which is also a way to try to weave together a full story while staying as much out of the way as possible.

Did Allman reveal anything that shocked you?

What shocked me was how open he was, how committed to the work and what it required. By nature he is a quiet and introverted person, not at all a life-of-the-party rock star, and initially, I had to really be convinced that he wanted to do this. But once we started, he was very willing to talk about the most difficult things in his life —the murder of his father, the death of his brother, the details of his own struggles with substance abuse — in a way that made it clear he really wanted this book to be definitive and honest. I think the fans can feel that, and it’s why we’ve gotten such a fantastic response.

Do you have a personal rapport with Allman? Or when you finished the book, was that the end of the relationship?

I think we had a great working relationship, but I don’t expect that we’ll just hang out a lot from here — he’s not really a hanging-out type.

USA Today wrote that “Given the celebrity memoir genre often is rife with hyped revisionism, My Cross to Bear carries a welcome seal of honesty.” Is that because of you, or Allman?

It’s certainly because of him. I hope that I helped realize that honesty through the questions I asked and the editing of his words to give a full sense of him, his language, and his thoughts and memories, but every word in there came from him, and without his genuine openness in discussing his life, nothing I could have done would make it feel like the real thing.

Writing about pop music for a living seems like a fantasy job. How did you get into it?

I never wanted to do anything else. My mother [Janet Light] was a dance writer-critic for the Cincinnati newspaper when I was growing up – so the idea that you would see a performance and then sit around talking about it, figuring out what worked and what didn’t, what was important and how to convey that to someone else was just what was around me. There has never been anything I believed in as much as I believe in the power and the possibilities of music, nothing else that has ever been so important to me. So I started writing about music for my high school paper, then at Yale, then interned at Rolling Stone and was off and running.

Who would be your dream collaborator?

My dream collaborator? Hard to say — people are funny about doing memoirs, they often feel like it’s kind of a tombstone for their career, so some of the people I would love to work with are still very resistant to the idea.

You consulted on the Rock ‘n’ Roll Hall of Fame in Cleveland. Has the Hall of Fame been fair about the role of Jews in rock?

Can’t say I was keeping score on the Jews-per-year count. Seems like Jews from the Beastie Boys to David Lee Roth to Phil Spector have been decently represented in the Hall of Fame. The single most controversial omission from the Hall, though, has long been Kiss — so I guess you should ask Gene Simmons if he thinks it’s fair!