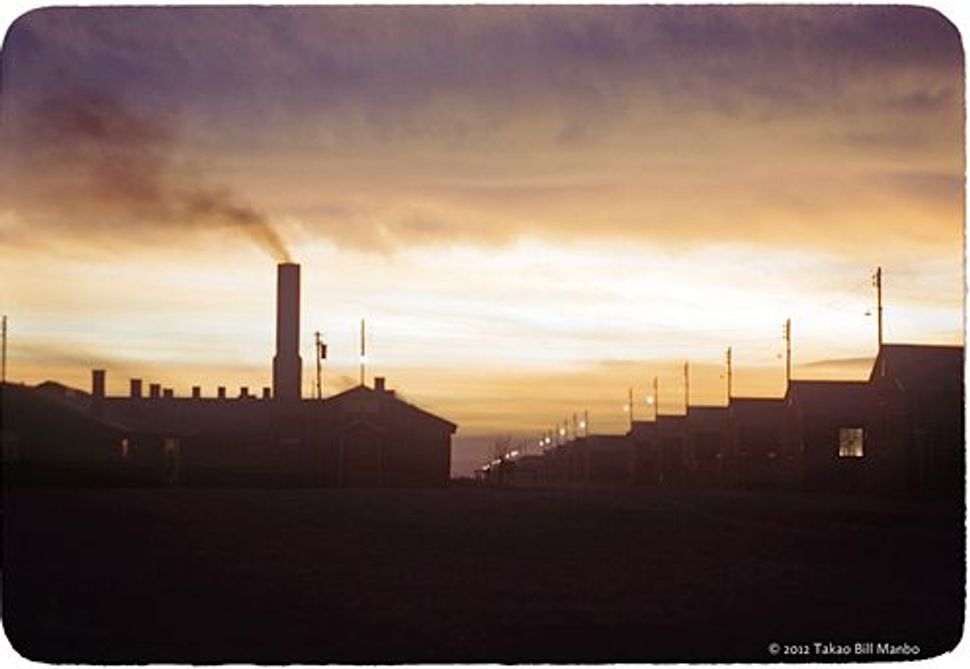 Eric L. Muller is Dan K. Moore Distinguished Professor in Jurisprudence and Ethics at the University of North Carolina School of Law and director of the University of North Carolina at Chapel Hill’s Center for Faculty Excellence. His newest book, “Colors of Confinement: Rare Kodachrome Photographs of Japanese American Incarceration in World War II,” is now available. His blog posts are featured on The Arty Semite courtesy of the Jewish Book Council and My Jewish Learning’s Author Blog Series. For more information on the series, please visit:

(Set aside for a moment the fact that it’s a color photo, and that we’re accustomed to imagining concentration camps in black and white. The photo is from 1943, and yes, it’s in color — but more on that later.)

It’s easy to imagine that this could be a row of barracks at Westerbork, the transit camp in Holland that housed Dutch Jews (most famously Anne Frank) awaiting removal to the east.

It could just as easily be a shot of Flossenbürg, a camp in far eastern Bavaria housing mostly political prisoners for forced labor.

Conditions were harsher and many more people died at the notorious slave labor camp Buchenwald near Weimar, Germany. My grandfather was among those imprisoned there; he spent a few weeks at the camp late in 1938 after his arrest at Kristallnacht. He described it as a dismal and brutal place, but I can imagine that in certain weather conditions he might have seen a view not unlike the one in the photo above.

And though it’s far less likely, the image could even conceivably be of a camp like Sobibor, where I believe my grandfather’s brother Leopold was gassed in 1942. (In the linked photo, Leopold sits in the chair with his left arm in a sling. My grandfather stands next to him.) Sobibor and a handful of other German camps existed only for murder, so if the image above is of one of those places, we might guess what the smoke is.

Now consider this picture. Is this what a concentration camp looks like?

This image has a lot of what we’d expect in a concentration camp, but the little inmate clutching the barbed wire fence doesn’t look European.

In fact, he is American, of Japanese ancestry. His name is Billy Manbo, and he is about 3 years old in the picture. The detention facility behind him, which housed over 14,000 Japanese and Japanese Americans from 1942 to 1945, went by the official government title of “Heart Mountain Relocation Center,” but people at the time routinely called it a “concentration camp.”

And one last picture, also from Heart Mountain. Is this a picture of a concentration camp?

These images are among the nearly two hundred stunning color slides that a Japanese American amateur photographer named Bill Manbo (the father of little Billy pictured above) took while imprisoned at Heart Mountain in 1943 and 1944. They are featured in my new book “Colors of Confinement: Rare Kodachrome Photographs of Japanese American Incarceration in World War II,” and they offer striking and sometimes unsettling new vistas on this American episode of mass injustice.

They also offer a chance to think about an unfortunate conflict that has roiled relations between some in the Japanese American and American Jewish communities — a conflict over the meaning of the term “concentration camp.” I’ll use my blog posts this week to explore that conflict and explain how I, as a descendant of inmates of one kind of camp and a student of the other kind, have resolved it.