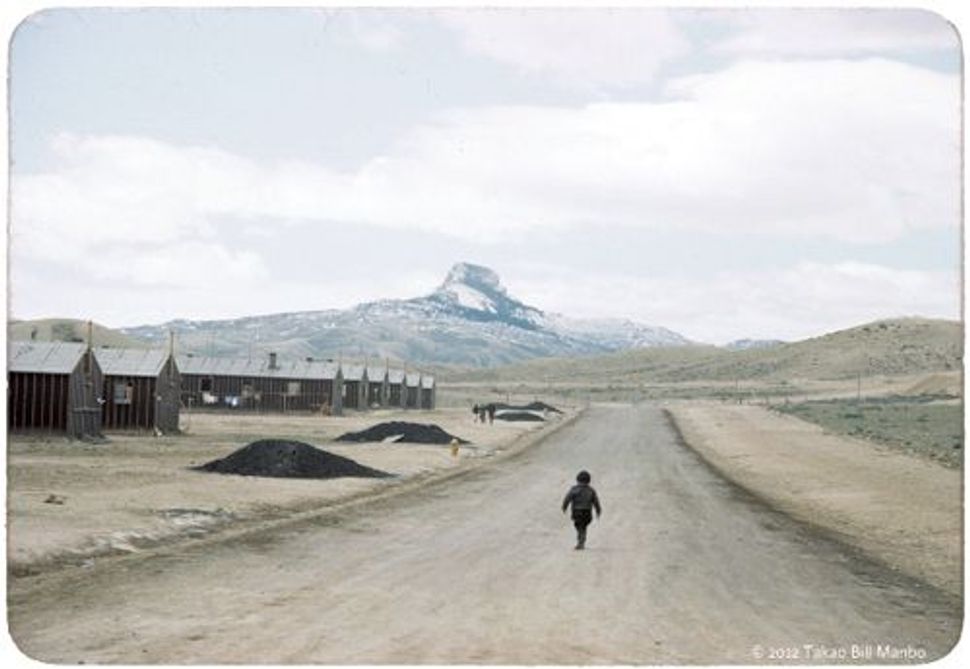 Yesterday, Eric L. Muller asked: What does a concentration camp look like? His blog posts are featured on The Arty Semite courtesy of the Jewish Book Council and My Jewish Learning’s Author Blog Series. For more information on the series, please visit:

My new book “Colors of Confinement” presents dozens of stunning Kodachrome photographs of everyday life inside the barbed wire confines of the Heart Mountain Relocation Center in 1943 and 1944. The photographer was Bill Manbo, a 30-something auto mechanic from Hollywood, Calif., who was locked up there in September 1942 along with his family and his wife Mary’s family. Although Manbo was not a documentary photographer, his pictures (and the fact that he was allowed to take them) capture much of what was unique about the confinement sites that the U.S. government created for the West Coast’s ethnically Japanese population during the war.

On the one hand, the photographs reveal a population held captive in a desolate desert compound with no conceivable justification other than suppositions about racial loyalties.

On the other hand, the photos reveal that the population’s captors allowed them a surprising number of freedoms, including the freedom to engage openly in Japanese cultural and religious activities… and the freedom to wander around taking pictures of them.

Of the first point — the injustice of the mass incarceration — there can be no doubt. Months after the Japanese attack at Pearl Harbor, the U.S. government uprooted and exiled some 120,000 people of Japanese ancestry — citizens and resident aliens alike — for reasons that included biological racism and economic opportunism. The U.S. Army general who ordered the roundup explained that U.S. citizens were just as dangerous as their Japanese immigrant parents because the “Japanese race” was an “enemy race” in which the “racial strains” ran “undiluted” in the blood of the second generation. White-dominated agricultural interests on the coast that had long sought the ouster of successful Japanese farmers saw an opportunity to put them out of business and were among the most forceful advocates for mass exclusion. It would be a distortion to say that the ouster of the Japanese from the West Coast and the ouster of the Jews from Germany had exactly the same causes, but it would also be a mistake to miss the fact that the two mass deportations shared key motives. U.S. Supreme Court Justice Frank Murphy noted this in a 1943 decision when he wrote that the government’s treatment of Japanese Americans bore “a melancholy resemblance” to Germany’s treatment of its Jews.

And yet there can also be no doubt that the War Relocation Authority (WRA), the civilian agency responsible for confining Japanese Americans in the camps, did not share the ugliest views of those who had called for and overseen their removal from the coast. The WRA was certainly capable of manipulation and blunt repression of its charges, but it also often sought to help them make their imprisoned lives more bearable and less dreary, healthier and more productive, and less likely to end up in a state of permanent government dependency. This is why Bill Manbo’s photographs include images of dancing kimono-clad women, and of sumo-wrestling men, and of inmates lined up for a matinee showing at one of the camp’s two movie theaters.

This helps us appreciate what is arguably the most amazing thing about this collection of photographs (apart from the fact that they’re in color): a prisoner had the freedom to walk around the camp and take them.

In the spring of 1942, before Japanese Americans were forced from their homes, cameras (like short-wave radios, binoculars, and other such items) were contraband. In the late winter of 1943, however, the WRA came to realize that camp inmates would have an easier time adjusting to life behind barbed wire if it restored to them the ability to take family photos and document their lives with cameras. Not many had the wherewithal to reclaim their cameras, and fewer still had the skill and commitment to shoot in Kodachrome, then an expensive technology that was just seven or eight years old. Bill Manbo did, though, and it’s because he did — and because the WRA trusted him enough to allow him — that we have these beautiful glimpses of life at Heart Mountain.

Images from “Colors of Confinement: Rare Kodachrome Photographs of Japanese American Incarceration in World War II” edited by Eric L. Muller. Copyright 2012 by the University of North Carolina Press. Photographs by Bill Manbo copyright 2012 by Takao Bill Manbo. Published in association with the Center for Documentary Studies at Duke University. Used by permission of the publisher.