Can Charles Krafft Be Defended? 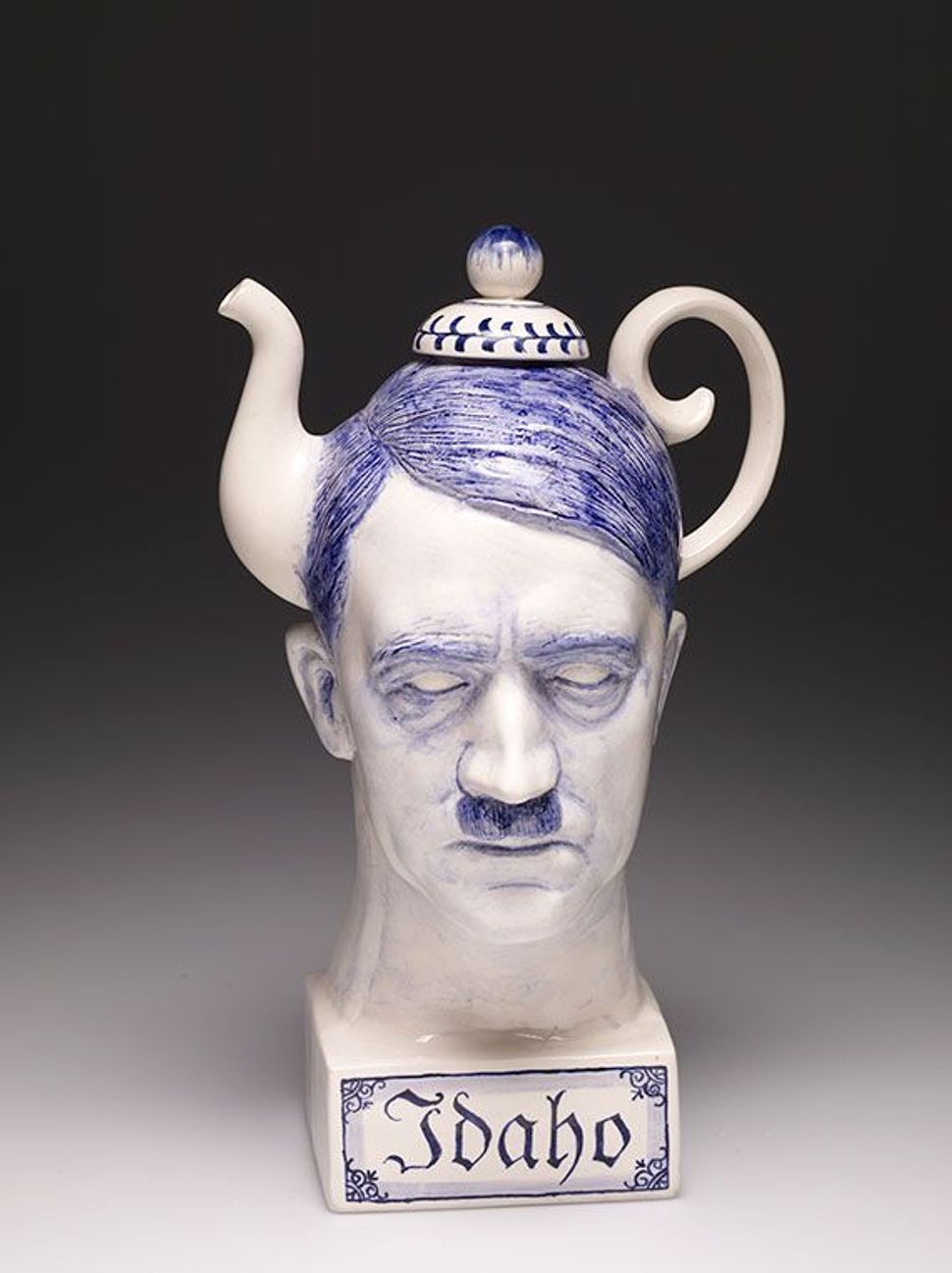 After reading Frederic Spotts’s “Hitler and the Power of Aesthetics” as a Yeshiva University undergraduate, I conducted an experiment. I approached passersby on Amsterdam Avenue and showed them Hitler’s paintings, covering up the information below each work. My classmates praised the “Impressionistic” palette and the “realism” of the landscapes. When I exposed the artist credits, they were horrified. Nothing had changed about the quality of the art, but the idea of praising anything about such an evil man was understandably anathema.

Some critics see a similar problem in the works of Seattle-based artist Charles Krafft. From guns and swords fashioned in the imitation-porcelain Delftware style (Krafft’s calls his take “Disasterware”) to his swastika-laden “forgiveness perfume and soap,” Krafft has a proclivity for unhappy subject matter. Until now, the work was understood as ironic critique. But given recent revelations about Krafft’s personal views, it seems that it might not be tongue-in-cheek.

Writing in The Stranger on February 13, Jen Graves explored Krafft’s personal convictions about Jews and the Holocaust. In a podcast (about 24 minutes into the clip) on a white nationalist website, Krafft stated that “the Holocaust is a myth” which is “being used to promote multiculturalism and globalism.” In an email to Graves he wrote, “I don’t doubt that Hitler’s regime killed a lot of Jews in WWII, but I don’t believe they were ever frog marched into homicidal gas chambers and dispatched. I think between 700,000–1.2 million Jews died of disease, starvation, overwork, reprisals for partisan attacks, allied bombing, and natural causes during the war.”

In response to questions from the Forward, Krafft was unapologetic about his views. “When I admitted to skepticism about the received history of the Holocaust, I was then branded an anti-Semite,” he wrote in an email. “The question ‘Are you a Holocaust denier?’ did not catch me off guard as I had written about my research and was aware of the potential for controversy that could result from publicly expressing the conclusions I’d drawn from it.”

Asked about the use of swastikas in his work, Krafft wrote: “Should an artist wield it with extreme caution so as not to cross a line that may be liable to hurt a lot of people? Well, maybe if the artist appropriating the symbol believed the people claiming to be so hurt by it were really suffering. Since I think whining about swastika imagery in contemporary art is really just another way of trying to prevent an open debate about the Holocaust, I have occasionally used swastika imagery to draw attention to the fact I think the search for historical truth is more important than anyone’s hurt feelings.”

What should we make of Krafft’s work now that such views are known? What are the responsibilities of collectors and museums that own his work, particularly those who might feel they had been duped, or had missed warning signs along the way? Can the art, in this case, be appreciated independently of the artist?

That’s what some critics are arguing. In The Globe and Mail, Russell Smith recommends ignoring Krafft’s statements completely. “His art is weirdly powerful, perhaps despite his intentions,” he writes. But it’s not so easy to separate the two. In Hyperallergic, Jillian Steinhauer writes that “Charles Krafft’s artwork would be creepy no matter what,” but following Graves’s exposé, it “has become a whole lot more disturbing.”

It’s worth examining the nature of that creepiness, though. Maurizio Cattelan’s HIM, a sculpture of Hitler kneeling in prayer, is off-putting (no doubt by design) because it suggests that forgiveness might be attainable for the Nazi leader. Krafft’s works are alarming for different reasons. At the risk of inflating the quality of Krafft’s art, the works are actually complex in an interesting way.

Krafft depicts Hitler and swastikas not in bronze or marble, but in a very vulnerable medium. By depicting violent iconography in a fragile and delicate substance like Delftware, which is typically reserved for windmills, ice skaters, and joyful lovers, Krafft calls attention to the incongruity of form and function, a juxtaposition that makes the violence seem even more disturbing. Krafft might hold a lot of unsavory views. But if his work is meant to express them, it does a poor job.

Can Charles Krafft Be Defended?