A Scandalous Theory of Defense 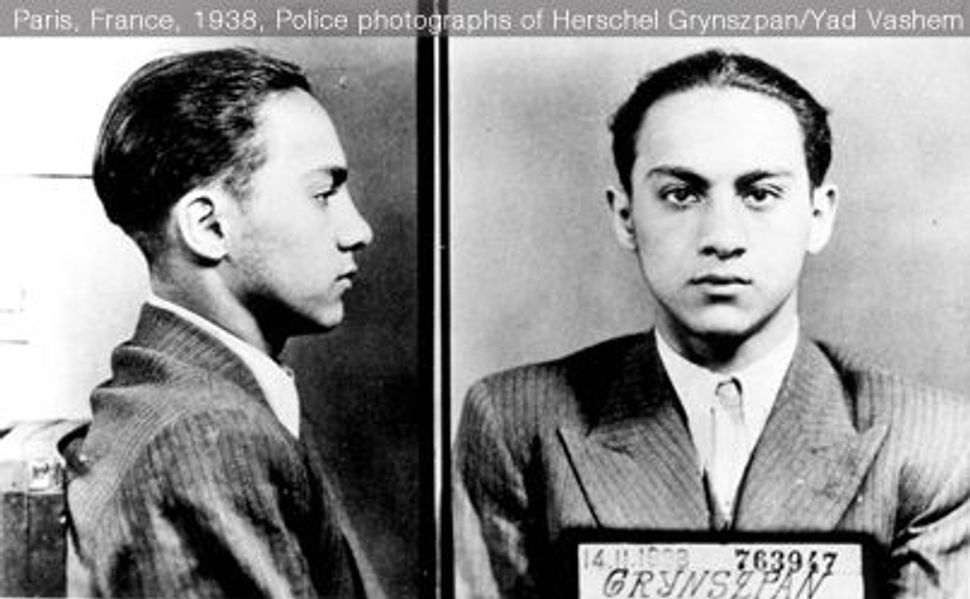 Jonathan Kirsch is book editor of The Jewish Journal. Earlier this week, he wrote about Jewish resistance and restoring Herschel Grynszpan to the pages of history His blog posts are featured on The Arty Semite courtesy of the Jewish Book Council and My Jewish Learning’s Author Blog Series. For more information on the series, please visit: 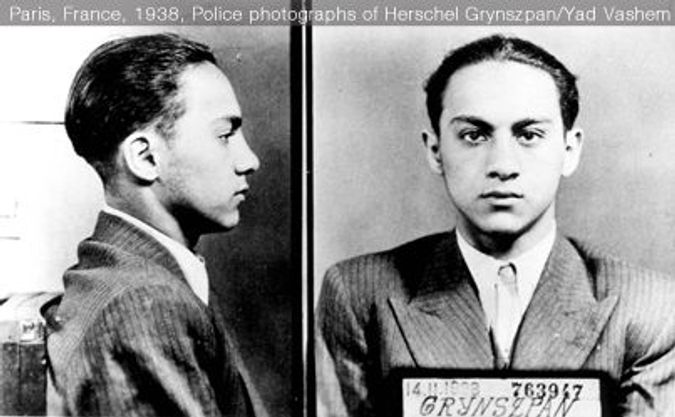 At the age of 17, as a refugee from Nazi Germany living illegally in Paris, Herschel Grynszpan saw the world in 1938 as a dire and dangerous place, a perception that he shared with all of his fellow Jews. Unlike them, however, he was capable of imagining the atrocities that the Germans would be willing to carry out in the next few years, and he resolved to call attention to the plight of the Jews by assassinating a Nazi diplomat. That’s the story I tell in my new book, “The Short, Strange Life of Herschel Grynszpan: A Boy Avenger, a Nazi Diplomat and a Murder in Paris” (Liveright).

“I have to protest in a way that the whole world hears my protest,” he wrote to his parents in a confessional postcard that he was unable to mail before his arrest, “and this I intend to do.”

Herschel is not the only young Jew who showed more vision and more courage than his elders in those terrible times. After all, it was the youthful activists of the Bund and the Zionist movement, both left and right, who banded together in the ghetto uprisings in Warsaw and elsewhere while some older and supposedly wiser members of the Judenrat cooperated with the Germans in drafting the deportation lists. (To be sure, young people can be impulsive and even reckless — we have seen yet more evidence of this fact in recent headlines — but we should not deny that sometimes a hotheaded boy can be right.)

Yet it is the young ghetto fighters who are remembered, honored and celebrated, while Herschel Grynszpan is almost wholly ignored.

More than one reason can be cited to explain why Grynszpan has been derogated, diminished and sometimes entirely left out of the history of Jewish resistance during the Second World War. In my book, I explore all of the rumor and speculation that has attached itself to the Grynszpan case, including a catalogue of conspiracy theories, some focusing on the Jews and some on the Nazis, which have been offered to explain his exploits. (Hannah Arendt embraced one of the more bizarre theories in “Eichmann in Jerusalem.”) One reason, however, stands out.

At a crucial moment in the Grynszpan case, when the boy was awaiting his murder trial in Paris, Herschel’s attorney made a remarkable proposal to his client. The French were fearful of war with Germany, he pointed out, and no jury would dare to acquit him of the crime if they believed that he had murdered a Nazi diplomat as a gesture of protest against the Third Reich. But what if his motive was something more intimate? What if the Nazi diplomat whom he killed was a sexual predator who had seduced and then abandoned him? If so, the attorney suggested, the jury might be persuaded to regard the whole affair as case as a crime passionelle rather than a political assassination.

Grynszpan rejected the scandalous theory of defense and insisted on justifying his crime as a legitimate act of protest against Nazi mistreatment of the Jewish people. The idea was abandoned by his attorney, who dismissed Herschel as “that absurd little Jew,” but not by Herschel himself. Once in Germany custody, utterly alone in a Gestapo cell, he saw a single way to frustrate Hitler’s plan for a show trial. If put on trial, he courageously told his interrogators, he would testify that he murdered the Nazi diplomat as an act of revenge against a homosexual predator who had ruined and betrayed him.

Here was Herschel’s single greatest act of courage and vision. He understood that the Nazis hated homosexuals as much as they hated Jews, and he recognized that they would not stage a show trial if he were to sully the honor of the Third Reich by characterizing his victim as a gay man. The decision was made by Hitler himself after he had been warned of Herschel’s intentions by the trial planners, and the elaborate script that had been prepared for the Grynszpan trial was shelved. Herschel had sabotaged the Nazi plans for a propaganda coup, but he also managed to cast a shadow over his own motives. “I guarantee you, if everything about Grynszpan’s case was the same, except that he slept with Anne Frank,” wrote journalist Jonathan Marks in the New York Jewish Week in 2010, “there’d be floats in his honor at the Salute to Israel Parade.”

No hard historical evidence supports the allegation that he had been seduced and abandoned by the man he assassinated. Indeed, we do not know with certainty whether or not Herschel was gay at all. But it is beyond serious debate that the explosive issue of sexual orientation that he injected into the case while in German custody cast a pall over his exploits. The Nazis were hardly the only homophobes, then or now, and his avowed sexual orientation may help us understand why he is treated so coolly even in Jewish circles.

A Scandalous Theory of Defense