Inspired by Gluckel of Hameln 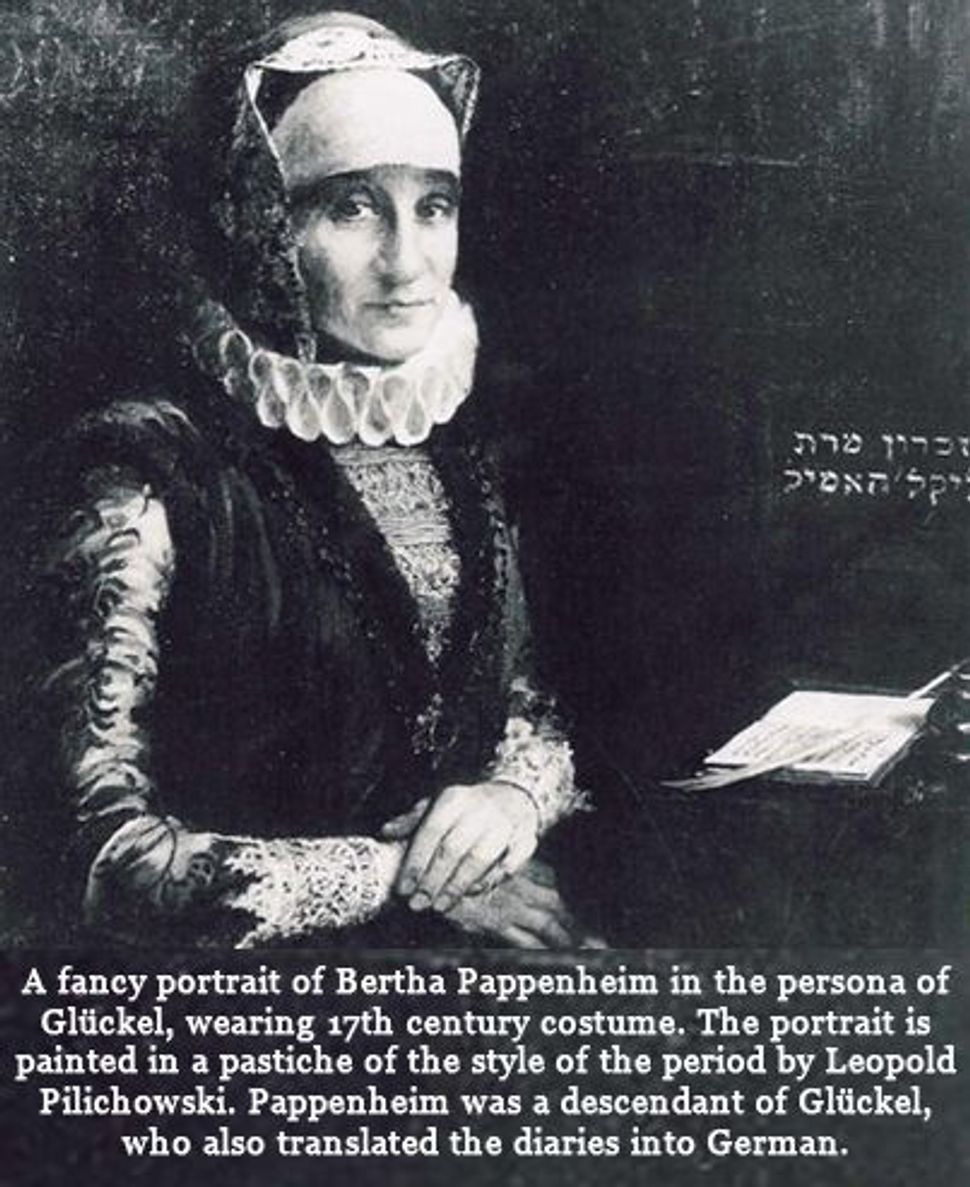 This week Rebecca Miller will be sharing texts that shed light on Jewish life in 18th-century France, the setting of her new novel, “Jacob’s Folly” (Farrar, Straus and Giroux). Her blog posts are featured on The Arty Semite courtesy of the Jewish Book Council and My Jewish Learning’s Author Blog Series. For more information on the series, please visit: 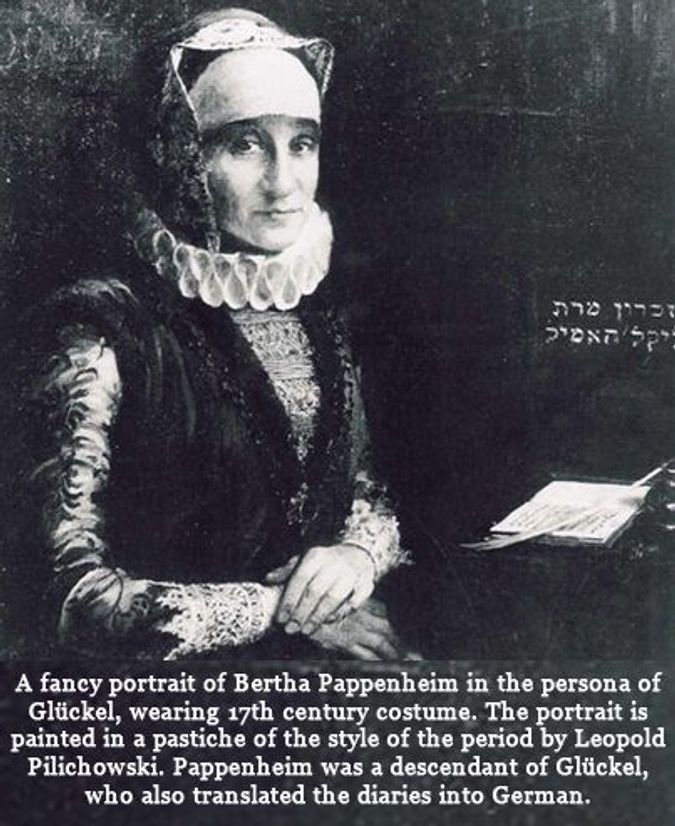 Gluckel of Hameln was an intrepid businesswoman, a mother of twelve children, a passionate wife, and a memoirist. She died in 1724, at the age of 78. Her memoirs are a rare window into the life of European Jewish women of the period. What struck me most vividly by her account of her days was her ability to bridge a business career (otherwise known as financial survival) and family concerns, living a unified, if exhausting, life.

“My father had me betrothed when I was a girl of barely twelve, and less than two years later I married.” So ends Gluckel’s childhood. As often happened, Gluckel’s marital deal included her being exported to another town. In this case, she was crammed into a peasant cart along with the rest of the wedding party (her mother was much put out, having expected carriages) and bustled off to the “dull and shabby hole” of Hameln, a small village. “There I was, a carefree child whisked in the flush of youth from my parents, friends, and everyone I knew, from a city like Hamburg into a back-country town where lived only two Jews.”

After the wedding festivities were over, however, Gluckel adapted fast. She adored her father-in-law. After a year, however, her young husband’s ambitions were too big for Hameln and the married children moved to Hamburg, living with Gluckel’s family, where her father’s “pack of servants” helped them with daily life. There, as it was the fashion among gentiles to “wear solid gold chains, and gifts were all in gold,” her teenaged husband traded in gold, “plying his trade from house to house, to buy up the precious metal. Then he turned it over to goldsmiths, or resold it to merchants about to be married; and he earned thereby a tidy profit.”

In addition to these efforts, Gluckel calls her husband “the perfect pattern of the pious Jew”; he set aside fixed times to study Torah each day, and fasted Mondays and Thursdays, to such an extent that he compromised his health. He was a tower of patience. In its maturity, their relationship was both harmonious and, in its way, egalitarian. Referring to the fact that her husband asked her advice about a business decision, Gluckel effuses, “my husband did nothing without my knowledge.”

By the time she was 15, Gluckel was pregnant, “and my mother along with me.” Coincidentally, both mother and daughter delivered within a week of each other. They both had girls, “so there was neither envy nor reproach between us.” Endless visitors arrived in the household, anxious to see “the marvel, a mother and daughter together in child bed.” But the situation could prove confusing. One night, Gluckel’s mother picked up the wrong baby to suckle, causing great alarm when Gluckel woke up and found her baby’s cradle empty. All was well in the end, but not after a furious argument as to whose baby was whose. “A little more, and we’d had to summon the blessed King Solomon himself.”

After a year, Gluckel’s little family struck out on their own, renting a house and engaging “a manservant and a maid.” The manservant, Abraham, looked after the children. So, the concept of a ‘manny’ is in fact not new. Abraham, Gluckel notes proudly, went on to marry and become a successful businessman “worth 10,000 Reichthalers or more”; within the Jewish community, servitude was not a class-dictated condition. One made one’s own circumstances to a large degree. Those with less worked for those who had more, until the servants changed their circumstances, at which point the lucky or industrious ones became employers.

It was in Gluckel’s life time that the false Messiah, Shabbetai Zevi, achieved enormous fame. Thousands of Jews, among them her father-in-law, became convinced that Zevi was in fact the messiah. Throughout the world Jewish families rent themselves with repentance, prayer, and charity. Gluckel’s father-in-law packed chests with dried meat and dates for the trip to the holy land, and waited for the call to join the Messiah. But Shabbetai Zevi, who may have been suffering from delusions, or was possibly just a charlatan, was arrested in Turkey and converted to Islam. It was in part the collective depressive void that followed his unmasking which made space for the Hasidim, and their radical message of joyful worship.

At the age of 44, Gluckel’s faith was tested on her beloved’s death bed. As her man lay dying, Gluckel, who was having her menses and hence was forbidden to touch her husband, asked transgressively, “Dearest heart, shall I embrace you — I am unclean?” but he answered: “God forbid, my child — it will not be long before you take your cleansing (ritual bath that Orthodox women take after menstruation and childbirth).” He died later that day and so she never got to kiss him one last time. The massive struggle of self control she went through in those final moments must have been a torment.

Once widowed, Gluckel redoubled her efforts at business, trading in gems, lending money, travelling frequently. She amassed a tidy fortune and managed to marry off all her children, but then remarried a man with no business sense who lost her money. She ended up in the home of one of her daughters. Yet there is no trace of bitterness in Gluckel’s memoirs. She is, rather, a joyful, enterprising survivor, filled to the brim with life—even now, three hundred years after her death, her life force burns from the page.

Inspired by Gluckel of Hameln