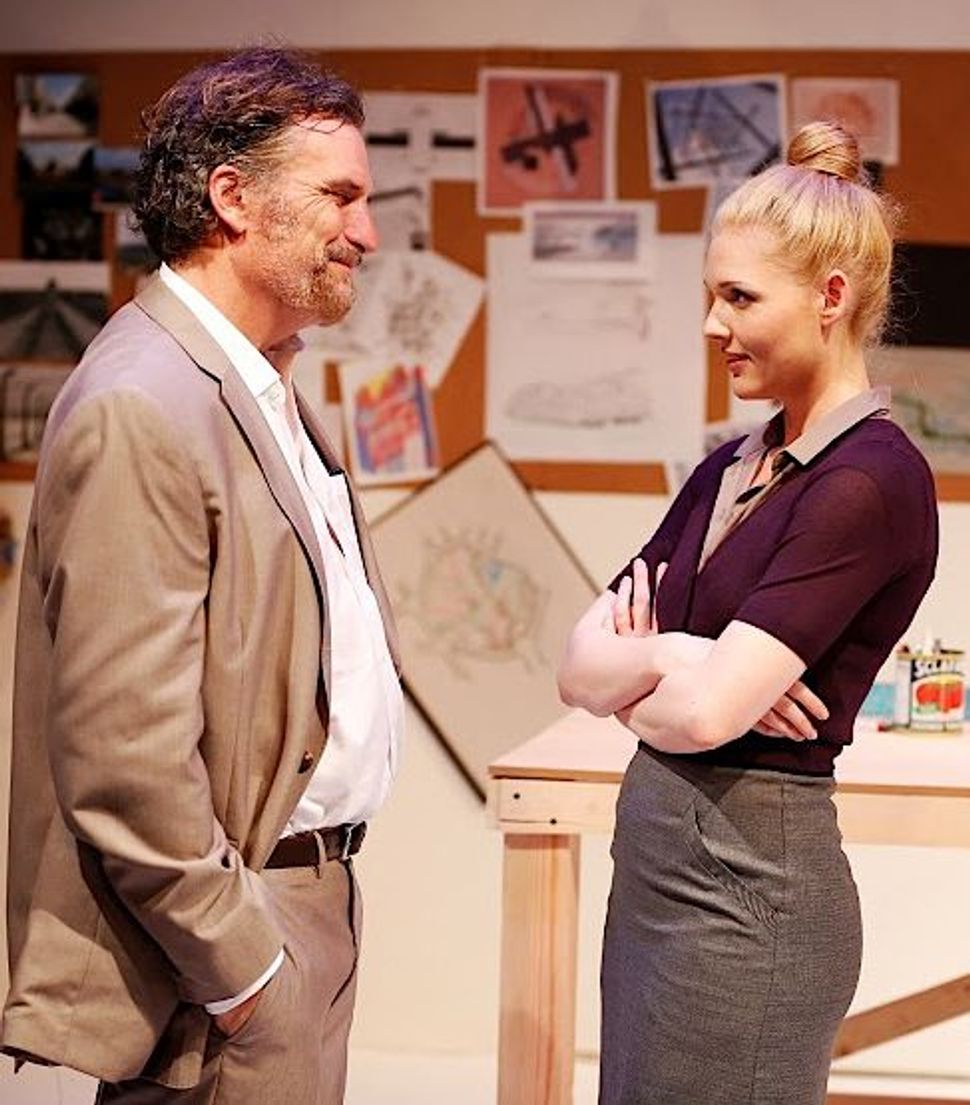 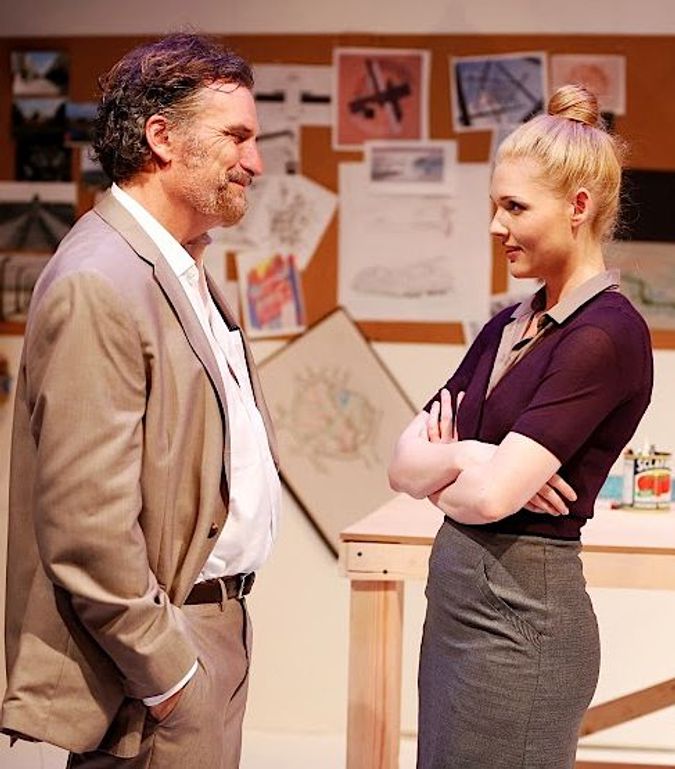 The play is a single-set two hander — an older man defending his work from a young upstart. In the wrong hands, this could have ended up less of a theatrical experience than a debate.

But the talented playwright manages to lift the proceedings far above its limitations. Safdie has written two other plays about the profession, “Private Jokes and Public Places” and “The Bilbao Effect.”

That’s not surprising, since he studied architecture and was raised in an architectural milieu. His father, Moshe, designed the museum at Yad Vashem. (That work and David Libeskind’s design for the Jewish Museum Berlin are both referenced in “False Solution.”)

The play is set in the early 1990s and the plan the two actors discuss is a Holocaust museum commissioned for Poland. Linda is a first-year architectural student at Columbia who is very aware of how beautiful she is. In the play’s opening monologue she says how easy it is to control men:

“I was getting a tour from one of his low-level project managers; he [Seligman] was showing potential clients around the office. As we passed in the hallway, I felt his glance stay on me an extra second — a familiar sensation that never loses its potency… or power. After that, it was only a matter of time before an opportunity presented itself. It usually does… if the desire is there.”

The desire is there; Anton wanders into LInda’s work area and the conversation and flirting begin. She is an admirer of his, she says. A paper he wrote when he was a young architect influenced her decision to enter the field. She chose his company in part because she wrote a report on him.

He asks what her conclusions were, and Linda responds that his early work was wonderful, but his more recent designs lack spontaneity. He’s repeating himself.

That segues into a discussion about the Polish museum and the creative process. Both Linda and Anton have one Jewish parent and were raised Jewish. Both were impacted by the Holocaust: Linda’s mother and Anton’s first wife were survivors. So both have more than a passing interest in this project.

Among the questions the play raises is whether it is possible to create a building that accurately represents six million Holocaust victims. It’s a task made more difficult by what the Poles want. The museum hasn’t been commissioned as a sign of Polish remorse, but rather as the centerpiece of an urban renewal project intended to attract tourists.

Seligman leaps into the discussion. He’s had his own misgivings and doubt. But it is this flirtation that gives Seligman both impetus and energy. And that, really, is what “False Solution” is all about. At its heart is the creative process. Seligman’s first marriage ended in divorce after he had an affair.

Now he’s settled into a boring suburban life of soccer games and lawn care. Is that why his work suffered as well? Does he need the danger of this flirtation to get his creative juices flowing again?

Or is it simply the need that people of achievement have for their egos to be massaged, like Elliott Spitzer, Anthony Weiner or (to keep this ecumenical) Bill Clinton and John F. Kennedy?

And what of Linda? Is she attracted by his power, or by a shot at redesigning the museum to more accurately the suffering inflicted on her mother and grandmother?

As interesting and thought provoking as it is, “False Solution” suffers from dialogue that is too technical, as though it was written to be read, rather than spoken. (“I find your early theoretical forms, despite being cerebral, nevertheless convey an elegant aesthetic sensibility. They’re original, definitive, instructive — at once nostalgic yet characterized by unusually sharp foresight and imagination.”)

On the positive side, the two actors are wonderful. And Safdie, who also directed, did wonders with his staging. Several times when Linda approaches Anton’s space, you don’t need words to figure out her intentions, or a thermometer to feel the heat.