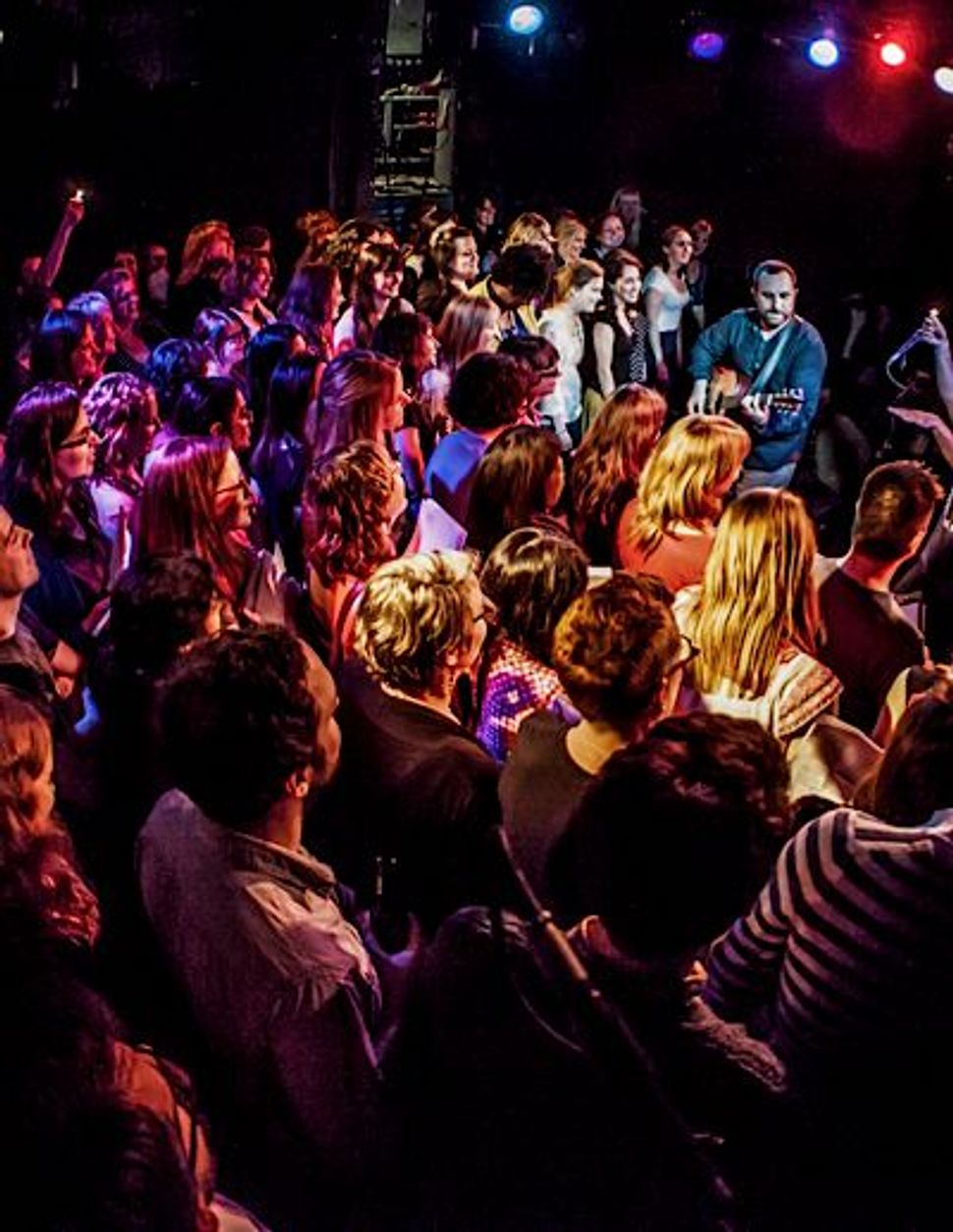 Bryan Adams Tweeted about them. Patti Smith shared a stage with them. And pop-star siblings Tegan and Sara number among their famous fans. 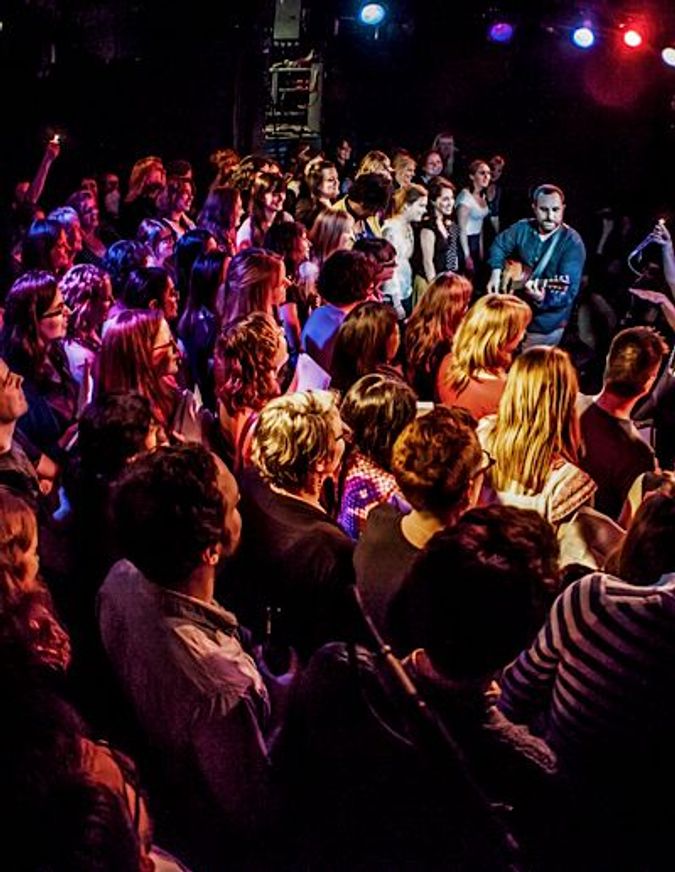 Twice a week in Toronto, the pair brings together crowds to sing “original choir arrangements to classics pop hits.” On October 22, C! C! C! — as their friends call them — lands at The Living Room in Manhattan for a choral rendition of Elliot Smith’s indie moper “Needle in the Hay.” The following night, Goldman and Adilman will take over Brooklyn’s Union Hall to lead the crowd in singing Tegan and Sarah’s “Closer” and “I Was a Fool.”

C! C! C! has recorded more than 175 songs, from The Hollies and The Smiths to Solange and Daft Punk. There are no auditions for the choir; its singing nights are held in bars, where “the atmosphere is casual but the arrangements are tight,” boasts a press release.

The group’s looseness belies massive success in their hometown; Toronto Life magazine named them a “Reason to Love Toronto,” the Globe and Mail saluted them as “choir hopefuls and happy hipsters,” and NPR featured a video of C! C! C!’s performance of Big Star’s “Thirteen.”

Goldman, who manages a popular Toronto brunch spot called Aunties and Uncles, has music in his blood; his father, Hy, runs KlezKanada, North America’s largest Jewish music festival. Adilman, self-described as “half-Jewish on his father’s side,” is a creator of Canadian TV hit Food Jammers; he once pitched a show to Canadian TV about finding other “Jewpanese” (“too niche,” he was told). Adilman spoke to The Arty Semite from Toronto.

Michael Kaminer: How did C! C! C! first come together?

Nobu Adilman: We wanted to get our friends together to sing. We thought it would be monthly but it immediately became weekly. It’s now twice weekly, and open to everyone in the city.

“Choir” sounds a little religious. Did either of you have experience singing in a synagogue or chorus?

Daveed was in an elementary school choir. Both of us have played music since we were kids.

How do you choose your repertoire? Do Canadian artists get preference?

We love great pop songs. We listen to them, strip them down removing extraneous and potentially dated production, and try to turn it into a three-part choral party. Some work, others don’t but we always have fun. No one gets preference but we’ve covered a lot of great Canadian bands.

C! C! C! sounds very democratic, but you also say to bring friends “unless they suck.” What do you do about participants who are complete musical disasters?

One of our tag lines is It’s Not A Democracy™ — there are too many of us and we need to be the final say — but on our Facebook pages members are always suggesting songs and sometimes they’ll give us great ideas. We haven’t met a musical disaster we couldn’t fix yet. It’s easy to be a leader when your main objective is to make sure people have as much fun as possible.

How do you think the NYC edition of C! C! C! might look/feel/sound different than your Toronto gatherings?

We think it’ll sound great but it’s like we’re starting all over again. In any given week we might have upwards of 200 people come out for our nights. Really deep friendships have developed over the years and there’s an ease that comes with that. We’ll have to work fast to make everyone feel like they’re best friends.

The Globe and Mail said Bryan Adams tweeted about your cover of “Run to You.” What was your reaction? Any other artists get in touch about your versions of their songs?

Bryan Adams tweeted that our cover of “Run To You” was “brilliant.” It was our first celebrity shout-out and it got us on Entertainment Tonight Canada. It was a thrill! Dan Navarro, co-writer of “We Belong,” heard our cover on NPR’s Sunday Edition, and came out to sing with us. After hearing our arrangements for “People Have The Power” and “Because The Night,” Patti Smith invited us to sing with her at the Art Gallery of Ontario. Tegan and Sara love our cover of “Closer,” which we recently sang at the Polaris Music Award gala, and will be teaching to NYC on October 22.

Have any Toronto celebrities come to a C! C! C!? Have you been surprised by any types of people who’ve come, like a biker who ended up singing Enya?

Our friend Chris Murphy from the band Sloan comes out semi-regularly but we can’t think of any bizarre occurrences!

Any shidduchs made at choir? Engagements? Marriages?

C! C! C! is the Craigslist of choir. You can find an apartment, a job, a dog-sitter, and yes, some action. There have been many matches made, one engagement so far, and a couple of disaster dates! We always say that if you’re a single straight man in Toronto, can kinda sing, and don’t come to choir, then you’re a complete idiot.

We have a choir TV reality show that we’re developing. The plan is to drive around North American to crack jokes and start choirs. We want to develop huge choir events — teaching arrangements to the audience with special musical guests who will join us on stage. We are starting a kids’ choir. And right now we hope to take our regular choir night to Chicago, L.A., and any other place that will have us. 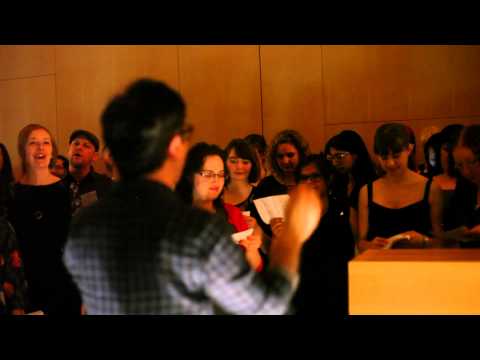