How Jews Became ‘White’ On Broadway 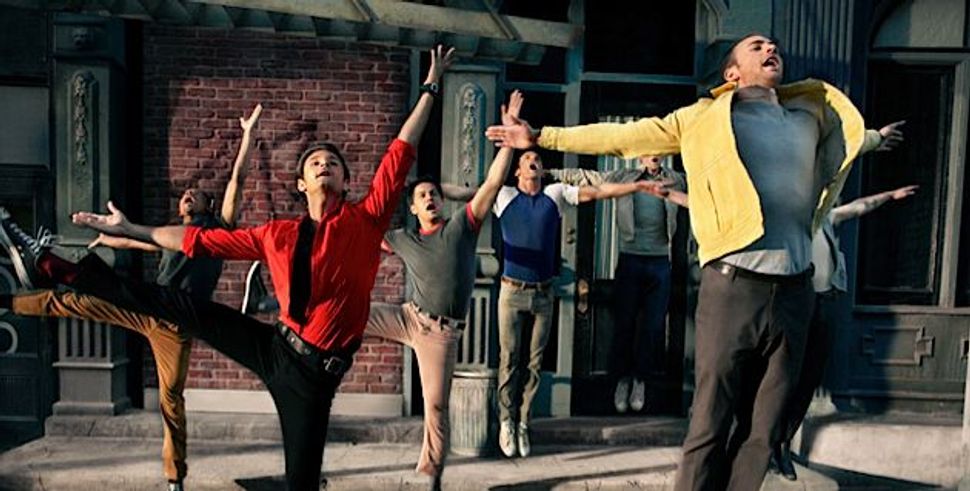 Even if you’re not a theater nerd, Warren Hoffman’s “The Great White Way” (Rutgers University Press) makes a fascinating read. The book’s subtitle, “Race and the Broadway Musical,” only hints at its breadth, and the depth of Hoffman’s laser-sharp analysis of an all-American art form. Billed as “the first book to reveal the racial politics, content, and subtexts that have haunted musicals for almost one hundred years,” “The Great White Way” also delves into Jewish contributions to the musical stage, including a kind of myopia around race and ethnicity as Jews fought to fit in themselves. Hoffman, a playwright himself, works by day as associate director of community programming at the Jewish Federation of Greater Philadelphia. He spoke to the Forward from his Philly office.

MIchael Kaminer: It’s hard to believe that no one’s explored a topic this ripe. Why is that?

Warren Hoffman: Until recently, musical theater hasn’t been given real attention. People looked at it as a fluffy art form with nothing to say of real significance. “Oh race, that’s too serious, how can a musical be about that?” But it’s all over the place. Because you don’t see African Americans or Asian Americans when you look at show like “Hello Dolly,” people ask how it can be a show about race — there are no people of color present. But that’s almost a misstep. People have missed some of what’s actually in front of their faces.

You can use Jews as an example to explain it. At the beginning of the 20th century, Jews were not seen as white. At that moment, white meant Anglo-Saxon. But over course of the century, Jewish and other white ethnic groups became part of larger white collective now often known as Caucasian. The point is, you can track that history through these shows. I talk at length about the Jewish component in shows like “Annie Get your Gun” and “West Side Story.” Jews are seen less as a nonwhite group, more taken into the mainstream. And those shows are representing that.

Sometimes the issues go beyond race, like the 1976 all-black “Guys and Dolls” revival, where you write that the play’s Yiddishisms and Jewish content became problematic. Can you explain?

I spend a whole chapter on these black productions, which reveal something by contrast. People don’t think of “Guys and Dolls” as a show with any racial or ethnic background. But once you had black actors inhabiting these characters, critics and audiences said, ”Wait, something seems off.” Part of it was all of those Yiddishisms. Nathan Detroit says “nu?” What African-American would say “nu?”

So even “Guys and Dolls” has its own ethnic history. How universal is this show? When you have people of other races playing this show, it reveals that a white show does have its own specific historical context, and in that particular show, even a Jewish context.

Your last book, “The Passing Game,” explored queer Jewish identity in 20th-century American literature, drama and film in the context of “passing” as straight, white and American. Are there common threads with “The Great White Way”?

My last book asked how Jews “performed” as white, mainstream Americans, and what it meant to perform as heterosexual, because Jews were seen as “queer” in many ways. And in this book, I examine race as a performance. All of us are performing all the time, and race, sexuality, and religion are all part of that.

In the course of researching the book, which musical changed the most once you analyzed it in the context of race?

I had so many “aha” moments, I almost wanted to scream out loud in the library. With “West Side Story,” especially, what I was seeing in the show’s Jewish transformation was amazing. “West Side Story” began life as “East Side Story.” It was Jews and Catholics fighting it out over Passover. My question as a researcher was how did show go from “East Side Story” to “West Side Story”? It was magical holding in my hands original correspondence between Arthur Laurents and Jerome Robbins — things like “What if Tony were Polish instead of Italian?” emphasizing the fact that it would make him lighter. To me, the show changed from East Side to West Side because there wasn’t enough of a color difference between Jews and Catholics. So the tension they wanted to depict didn’t really exist anymore. Racial conflict did that. That to me was exciting. You can see transformation of an idea through these letters.

How much responsibility do Jews have for any kind of race myopia in musical theater over the decades?

A great deal. The history of white identity can also be the history of Jewish-American identity. Theater was a place Jews could participate when not everything was accessible. It was a place they could reinvent themselves as white. They could shape the discussion about what America should look like, and how they as Jews wanted to participate.

A lot’s been written about Rodgers and Hammerstein, for example. Here are two Jewish guys; their musicals are very Americana. But they’re responding to racial and ethnic issues. Here’s a fact I just learned: Rodgers and Hammerstein optioned the Tevye stories, and could have done their own version. They didn’t, which blew my mind. They did all of these other ethnic groups except the Jews. They did “Flower Drum Song.” There’s a social justice element to what they were doing, but couldn’t come to terms with their own ethnic background.

Broadway musicals are a fairly narrow entertainment. Why would white America make it a vehicle for building a white identity? Why not just pop music or movies, which have broader reach?

My introduction refutes that. We assume musicals are just a New York thing. But think of all the musicals that get produced in high schools.There are things like “Glee” and “Smash” nowadays. Musicals have permeated our culture. They’re all over. We still come in contact with the musical very much in the 21st century. People may not go to Broadway anymore because of ticket prices, but musical theater — this art form — is still with us, and has been for a long time.

How Jews Became ‘White’ On Broadway