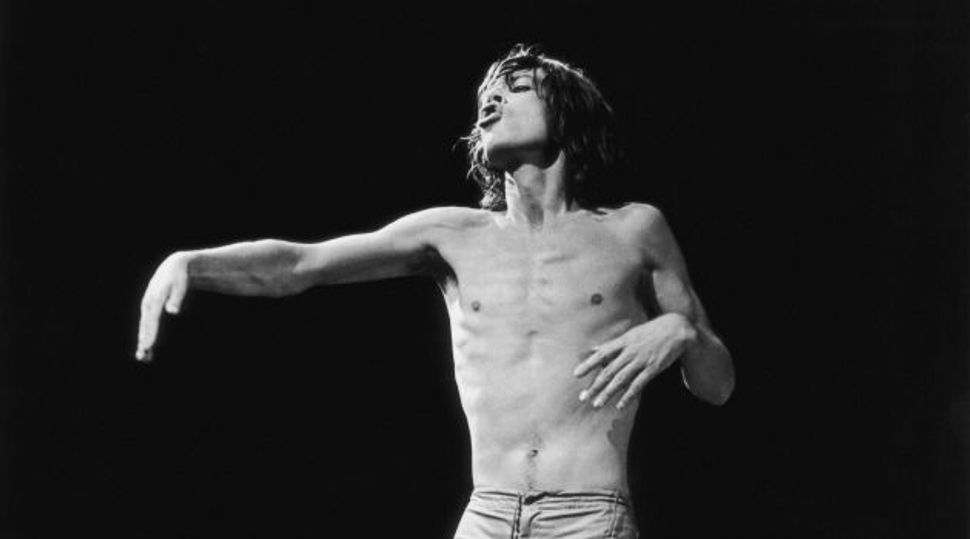 When Lisa Robinson name-checks Elton, Mick and Iggy, it sounds completely natural. It should; through four decades, the legendary music journalist has been nearly as pivotal a pop figure as her subjects. Robinson famously introduced David Bowie to Iggy Pop, helped The Clash and Elvis Costello score record deals, and hung out with the Beatles. In great detail, she recounts these and other unbelievable-but-true anecdotes in “There Goes Gravity: A Life in Rock and Roll” (Riverhead Books), a vivid, richly detailed memoir that functions as a de facto history of rock — and of an edgier, bygone New York.

Robinson culled her copy from thousands of hours of tape-recorded interviews she’s collected since her first columns were published in the British music weekly Disc and Music Echo in 1969. Today, as a contributing editor at Vanity Fair, she oversees music coverage and profiles pop royalty like Jay-Z, Beyonce, and Lady Gaga — who ended up cooking Robinson pasta. The Forward caught up with Robinson by phone from Manhattan, where she lives with her husband of more than four decades, Richard Robinson, himself a onetime rock journalist who produced Lou Reed’s first solo album.

Michael Kaminer: “There Goes Gravity” offers all of these fascinating anecdotes about pop legends, but gives away very little about Lisa Robinson. Why did you leave out autobiographical details?

Lisa Robinson: I’m really not talking about that because that’s another book. This is about my life in rock and roll. It starts in 1969, and the prologue talks about how I met Richard and started that life. I purposely did not talk about my childhood, my family, or my background.

Can you tell us a bit about your background here?

I’m a secular Jew. I was born into a somewhat religious family, but I describe myself as an atheist now. I grew up in a semi-liberal left-wing Jewish Upper West Side household. One benefit of that background was hearing Woody Guthrie, Leadbelly and blues music, as well as classical. And I snuck out of the house at age 12 to see Thelonious Monk and other jazz musicians.

In terms of being a Jew, or the traditions, I don’t observe anymore. I’m not a big fan of religion. I feel it divides people. Culturally, I’d describe myself as a secular Jew. There’s a chapter in the book where I’m having a long talk with George Harrison, and he’s going on and on about Hinduism. And there’s a point where I say that as an atheist, I could no longer take hearing it.

If you were starting your career in 2014, do you think you could have the same experiences and meet the same types of people?

I doubt it. As you know, everyone has to go through publicists. There are thousands of bands all vying for same space. When I started, it was kind of a scene. There were like 20 bands, and six people writing about them. People hung out. You fell into things. One person recommended you to another. Someone would drag me to a Led Zeppelin concert. Then Mick Jagger would see my story in a UK magazine, and someone would say to him, “You have to take Lisa Robinson on the road to maneuver the US press.” Today, there thousands of bands, stylists, corporate sponsorships, branding. They have to worry about their clothing line and cosmetic ad. The whole thing is totally controlled.

You were one of the few women writing about rock when you started. The music business was very much a boys’ club then. How did you deal with it?

I just skipped over it. When you’re a woman doing something, you’re not really thinking, “Wow, I’m a woman doing something.” You just do it. The business hasn’t changed that much. As much as we’ve fought for 40 years for equality, it’s still a boys club. Record company executives just thought I was some chick, until I started having a byline and getting access to their big stars. Ahmet Ertegun and I were very good friends. We hung out at Zeppelin and Stones shows, and there was never a problem.

With the musicians, I didn’t even leave the possibility open for sexual or extracurricular activity. I was interested in the music. I didn’t take drugs, didn’t sleep with them. Period. It was not even a temptation. Even Lady Gaga said “I can’t believe you didn’t sleep with these guys.” It was too tawdry. Same with cocaine — I never took it. It was too sleazy. I was always professional because I didn’t want anyone to think I was there to party.

What was it about you that made all of these rock stars trust you? They must have millions of people who want to get close to them.

The first time I met Mick Jagger, I said, “Those are the tackiest shoes I’ve ever seen.” He just burst out laughing. Most people would get all nervous and fumbling around him, or interview him with a list of questions. I never did that. We just chatted. I talked to them.

At the time, a band would do very few interviews. There wasn’t a media campaign. It was much looser. So when I did meet these musicians, I was just myself, exactly the way I’m talking to you now. I guess it was a welcome relief from someone asking Mick Jagger, “Is this the last tour that the Rolling Stones are ever going to do?” I talked about music, or made fun of shoes, or joked around. I didn’t think of them as friends, but thought I could be friendly toward them.

New York is a character in your book, with all of these chance encounters in clubs with these incredible rock and roll personalities. Could that kind of scene ever happen in New York now?

My best friend Fran Lebowitz has talked about this extensively. The city changed for two reasons: AIDS killed off a whole level of unbelievable artists who were at forefront of a lot of stuff. And selling out to real estate interests made it impossible for artists to live here. There’s no enclave left. We used to talk about Tribeca like it was Poland. Who can live there now? Russian billionaires in $100 million apartments? I don’t know what it’s like for young people, but not what it was like in the ‘70s, when you could live in a West Village apartment for $100 a month, go out every night, and create a scene.

The book’s pretty intimate about a lot of stars. Is there a lot of material that was so private, or so wild, that you chose to leave it out of the book?

I have 5,000 cassettes. I’m sure in the course of doing interviews, there were things that were said off the record. Plus, there are millions of things that aren’t in this book because I want to write another book! In terms of leaving out things that were too wild: I didn’t see that stuff. If you’re not sleeping with the band or taking drugs with the band, you could be on a completely different tour. If you’re not participating in it, you don’t witness it. And I would never write about rumors. I just wanted to be legitimate in the sense that I wrote about what I knew, what I saw, and what people said to me. I didn’t want to write a sleazy, salacious book. I wanted to write about why music mattered to me.