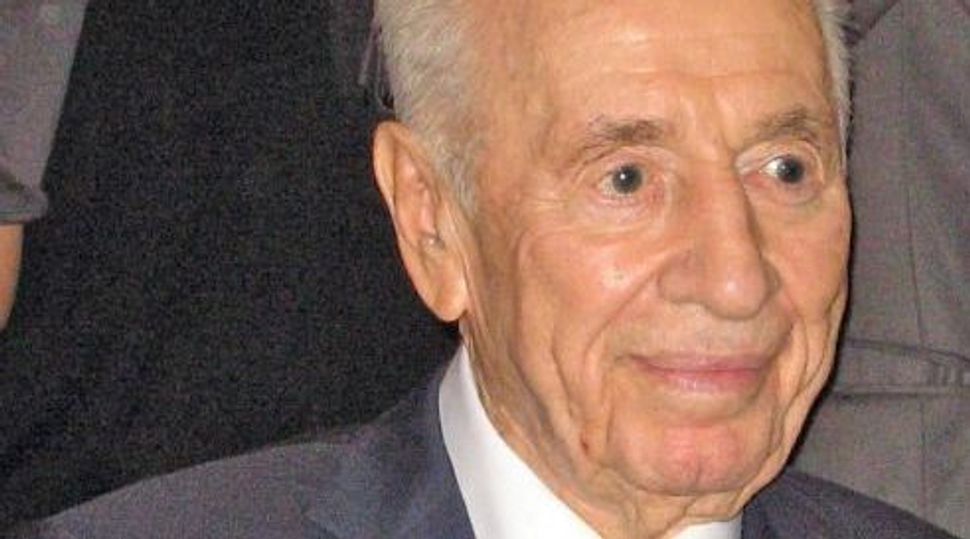 “Shimon Peres is still looking forward…never giving up on his dream that young Israelis and Palestinians will be able to overcome their differences and build a better world for both,” said Ron Prosor Israel’s Permanent Representative to the United Nations of Israel’s former PM and president and an honoree at the Anti-Defamation League gala dinner at The Mandarin Oriental.

“Having served his country over seven decades…working to bring about Israeli-Palestinian peace…he is a man of the future…. seeking a new job.” Prosor joked that it was “now time to do what every Israeli does when he finishes his national service — He backpacks through South America…. to Machu Picchu….” The former president’s itinerary was drowned out by the 350 guests’ laughter as clips from Peres’ granddaughter Mika Almog’s video showed Nobel Peace Prize winner Peres delivering pizza pies…milking cows…washing windows…

Declaring Peres “a man of the future,“ ADL National Director Abraham Foxman presented him with ADL’s Distinguished Leadership Award — an Agam menorah. He lauded Peres’ focus on” medical research, technological advances…” as means of “bringing about peace.” A still feisty though frail ninety-one year old Peres alluded to a moral army led by the ADL with “Abe” [Foxman] as “ its commander.”

“In the course of the time it takes me to introduce Eric Schmidt, Foxman said, “Google will handle in the neighborhood of twelve million searches…Or, put it another way, in one month Google — the company Eric steered as CEO for more than a decade and now serves as its Executive Chairman — handles over 100 billion searches — Wow!”

Accepting the ADL Leadership award from Foxman, Schmidt said “You have dedicated your entire career to one thing I care a great deal about — tolerance and understanding against hate. The enemy of prejudice is critical thinking…I actually believe that the Internet is the best thing ever invented to combat prejudice… Hate thrives in isolation.” Alluding to the teaching of prejudice and intolerance “out of sight,” Schmidt declared: “The Internet allows us to detect this…. it will never be possible for someone to spew out falsehoods at the level that have built the kind of hatred that ADL has been fighting for one hundred years.”

Cheerily Schmidt suggested: “97% of you sleep next to your mobile phone — spouse on one side, mobile on the other…” The audience members nodded and chuckled. “It never happens now without us knowing it…. When I was a boy growing up in Virginia…we only had Black and White. We didn’t have Jewish. I watched the prejudice of the rural South of Whites against my Black friends and vowed at thirteen that I would fight it with everything I had in me…. To see it live, to see it viscerally is to understand how bad it is. I actually feel that the Internet is the best thing ever invented to combat prejudice…. the Internet allows you to find it…stop it before it takes off. That’s the new world of ADL.”