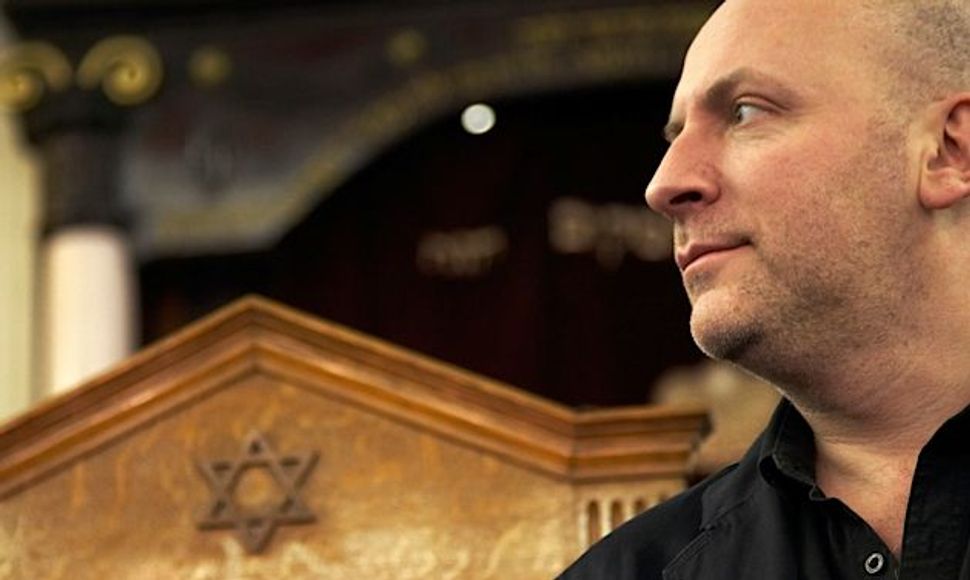 Daniel Cainer’s “Jewish Chronicles,” currently at the Soho Playhouse in New York, is a delightful cabaret act filled with Yiddishkeit and Yiddish-cute.

Cainer is a British Jew who grew up in an observant household, but, inexplicably, was sent to a Church of England School. (Ironically, he notes, the school later became a synagogue, proving “God has a sense of humor.”)

Cainer became a musician and composer, and admits he didn’t have “much to do with the Jewish world until recently,” when he experienced a “midlife kosher crisis.” That’s when a rabbi came to him in a dream and told him he should write a Jewish musical.

So here he is, sitting on a bare stage behind what presumably was a Yamaha electric piano, renamed a “Yamalka” for the occasion. Over his 80-minute set he sings a half dozen songs, which doesn’t sound like much. But they are not so much songs as ballads, short stories set to music, about his family and observations of life around him.

Cainer starts with a song about two tailors set to a ragtime beat — pausing only long enough to point out to the humorless that that was a joke — tailors, ragtime, get it? Would it have worked better for you if he said shmatte time?

He sings about a cocaine- and prostitute-hooked rabbi (“Bad Rabbi”), and his experiences when he was invited to appear at an arts festival in Recklinghausen, Germany (“No Jews in Recklinghausen”).

But he spends most of the time telling us about his unusual family. This includes an aunt who married a fundamentalist preacher and his divorced parents, each of whom apparently had affairs.

Still, he manages to tell his stories with amazing humor. While his music and voice are fine, it is touch with lyrics that make the show so much fun.

At one point, for example, the rabbi realized he was wrong and promised not to use the shofar as a bong.

His mom discovered her husband’s infidelities when she found “a letter that should have been hidden better that said, ‘Dear Davey, I’m carrying your baby. When are you going to tell your wife?’”

He concludes with a self-requested encore that talks about his grandparents, who made aliyah in 1967 and currently reside in Jewish heaven, where they are “complaining about the room they were given.”

His stories are familiar yet told with warmth.