My Year of Not Shopping 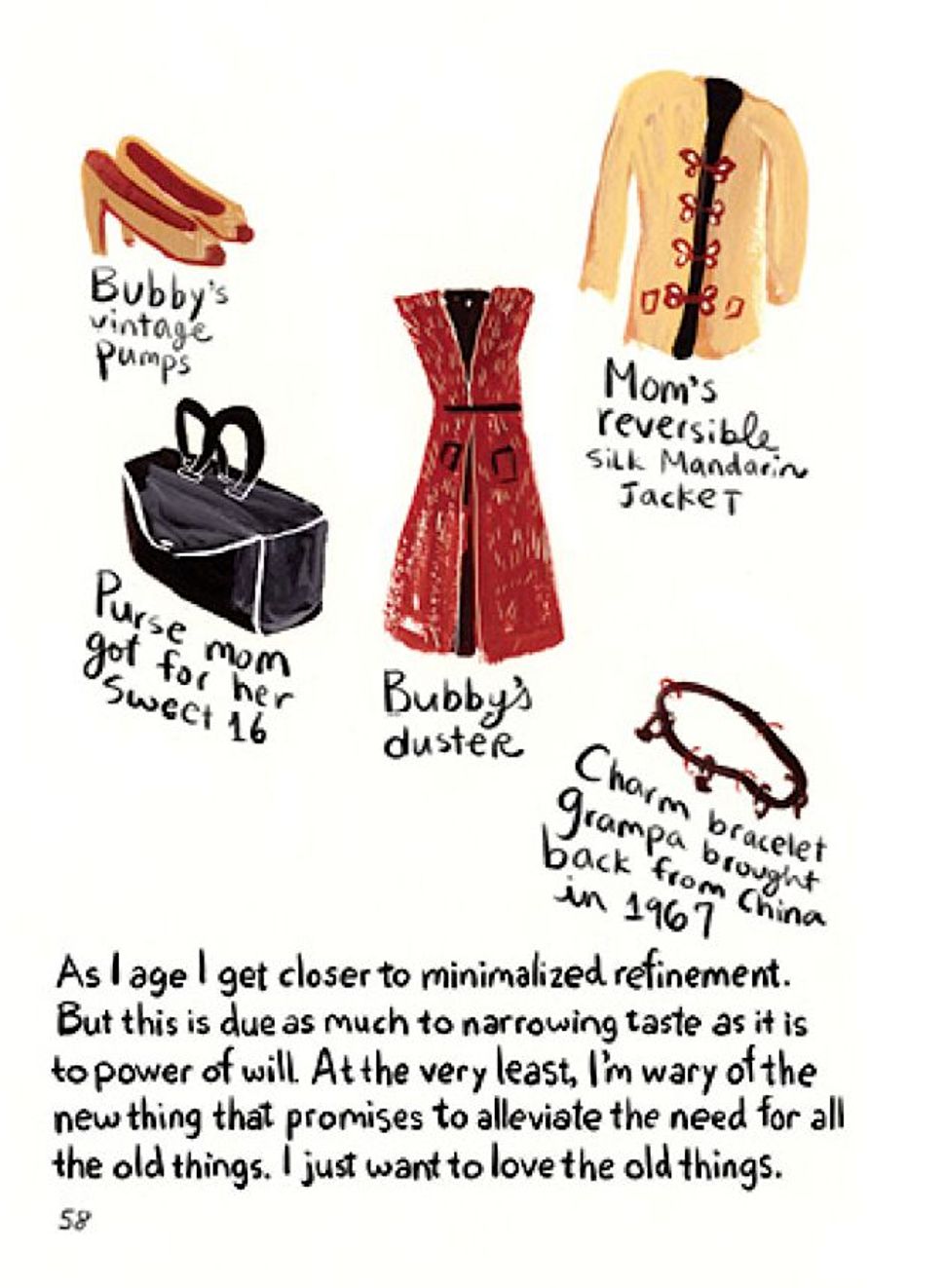 Equal parts autobiography, treatise, art project, and social commentary, Sarah Lazarovic’s “A Bunch of Pretty Things I Did Not Buy” (Penguin Books) chronicles a year in which the author sublimated consumer urges by drawing things instead of purchasing them.

But the book’s much more than a visual diary. Lazarovic’s elegant, witty illustrations, and her gimlet-eyed text treatments, offer a delightful take on what it’s like to try to think for oneself in a society where we’re programmed to consume from birth.

An acclaimed illustrator, cartoonist and teacher, Lazarovic has also written about pop culture for Canadian newspapers like The Toronto Star and The Globe and Mail. (Lazarovic is also one of the artists in “Graphic Details: Confessional Comics by Jewish Women,” which I co-curated and the Forward sponsors).

“I didn’t want to write a stunt book about my year of not shopping,” she told the Forward from her home in Toronto, where she lives with her husband, National Post features editor Ben Errett, and their daughter Plum. “I wanted to examine how I got to that place. It’s my personal journey from voracious consumer to more thoughtful non-acquirer. The book is frothy and light, but underneath, there’s a secret covert message about not consuming so much.”

Michael Kaminer: Based on responses I’ve seen online, the book’s struck a chord. Why do you think people are reacting so strongly?

Sarah Lazarovic: Everyone feels we have way too much stuff. They’re realizing how unhealthy it is for emotional, psychological, even ecological reasons. We don’t need more. We’re bombarded. But marketers are sophisticated, and before you know it, you’re buying things again.

I think it did. The only place you could walk to from my house was the Town Center Mall. If we were going on a suburban adventure, that was where my mom would let us go. It’s probably heightened in Florida, too, which is known for its shopping. There’s not a lot to do there.

Was your own epiphany about needing less connected to your stage of life? You had a child not long ago.

Having kids is definitely part of that. You don’t have time to go window-shopping, which is a good thing. You start prioritizing different things — like, you’re fine as long as you don’t go out in a dress that has baby barf on it.

I don’t think people should feel guilty about caring how they look. I still put on lipstick and a nice dress. But affluent suburban culture, for me, meant always wanting a new outfit. Newness itself is still such a prize possession in our culture. But there’s no novelty to that anymore. You can buy so much stuff for so little money. For me, it’s just not a thing anymore. You hit a point where it’s meaningless.

For some people, the JAP stereotype epitomizes conspicuous consumption. Is any of the book a rejoinder to that?

Probably a little bit. I want to be gentle about it. I don’t resent how I grew up. But there were things more prevalent in the culture I grew up in, like coveting scrunchy socks, and other tropes of late-21st century acquisitiveness among suburban teenagers. The consumerism of bar mitzvahs is also kind of unique. When else in world do you get so many luxurious presents at the age of 13? But I am appreciative of material comforts I grew up with. I just wish I hadn’t been so consumed with them — no pun intended. Every culture has things they want — but in a JAP milieu, there’s a lot of money.

There is something in the water now — I think they call it “slow washing” — where a bunch of different brands all have similar catchphrases — buy less, buy quality, keep this forever. They’re all coming from the right place, I hope. There are all these new brands that are about producing ethically and buying mindfully — “If you have do have to buy something, buy this.”

Do you think your message resonates more in the U.S., consumer capital of the universe, vs. Canada, where you live?

They used to say Canada was “under-retailed” in terms of square footage per capita. Now they say we’re caught up, that we have more than we can handle. We have all the global brands; nothing’s original anymore. There’s rapacious consumerism across North America.

But it’s pervasive everywhere, and especially scary in developing countries. Foreign brands are the status symbol in developing nations. You see all these stories about Chinese consumers and luxury brands. If my book ever gets translated into Chinese, I would love that.

What about immigrants, who often accumulate stuff as a sign of having “arrived”?

That’s what’s so hard. It’s a semi-elitist perspective to be a minimalist. When you’re an immigrant, you hang onto everything — “I can use this again” — and when you come from a place of privation, you want these talismans of success. It’s a complex message, but it comes from a good place.

What’s your advice for Forward readers who want to start their own shopping diet?

I’m studying consumer behavior at Rotman [Business School] at the moment. The number one problem is that people buy emotionally. They think fast. They think, “If I don’t buy one, it’s gone.” If you just take some time — in my case, it was a creative project that involved painting the thing — don’t buy it right away. Wait. Close the browser. About 99.9% of the time, you’ll rarely need the thing after that. Time’s the number one ingredient to stop shopping.

The other thing is that people have so much stuff that they don’t even remember what they have. My husband thought he needed a fall coat. It turned out he’d bought a nice one last year and forgot about it.

My Year of Not Shopping