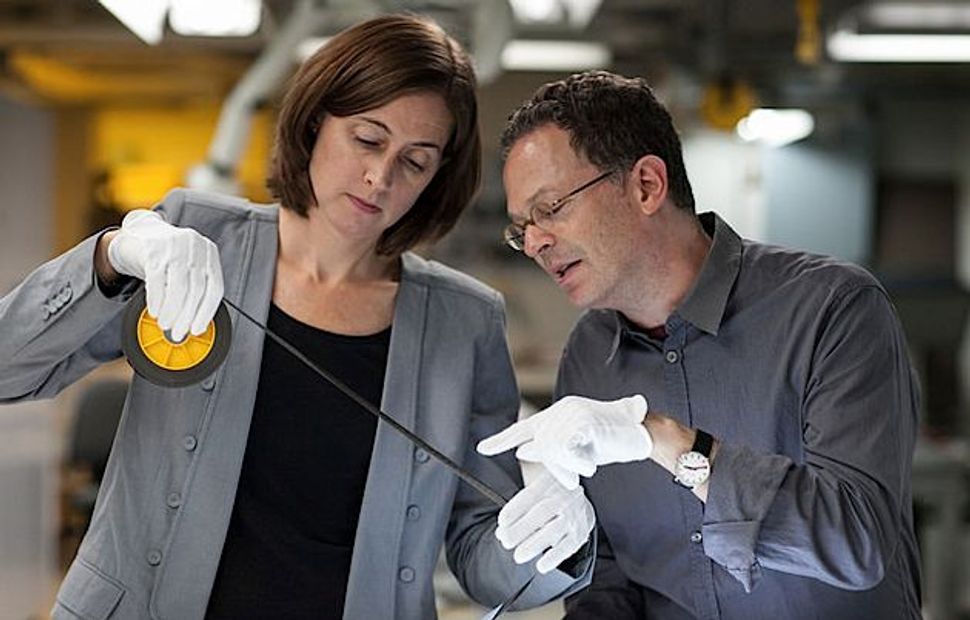 In 2009, writer Glenn Kurtz was sifting through a closet in his parent’s Florida home when he discovered a reel of 16mm Kodachrome color film in a musty cardboard box that had belonged to his grandparents, David and Liza Kurtz.

As prosperous Jewish American tourists, the Kurtz’s decided to take a six-week summer vacation through Europe in July 1938. With three friends they visited several European countries where they stayed in five star hotels, shopped, strolled and explored landmarks and art galleries. Traveling across France, Belgium, Switzerland, England and passing through Germany, they made a side trip to Poland, where David’s family originated.

Like many travelers, the Kurtz’s brought along their film camera but used it for only a fraction—in this case a scant 14 minutes—of the trip. The couple recorded scenes of their ocean crossing on the Nieuw Amsterdam, from Hoboken to Plymouth, England, and David filmed Liza and friends in the Grand Place in Brussels, taking in the sun in Cannes and feeding pigeons in Paris. But what captured their grandson’s attention was the brief three minutes of their visit to Poland that momentarily but critically documented Jewish life circa 1938 in David’s hometown of Nasielsk.

Kurtz initially worked to restore the film and then began a four-year journey to find out about the town and the people in it. After donating it to the Steven Spielberg Film and Video Archive at the United States Holocaust Memorial Museum (USHMM), he discovered that his grandparents unwittingly provided history with the only surviving film of Nasielsk, whose Jewish inhabitants numbered 3,000 before the war but plunged to just 80 afterward.

Kurtz’s book, “Three Minutes in Poland: Discovering a Lost World in a 1938 Family Film” (Farrar, Straus and Giroux, 2014), traces his effort and reveals his findings about the people in his grandfather’s lingering images.

Jill Werman Harris: In a crazy coincidence, you initially discovered the film because you were researching a novel with a plot bizarrely similar to what became your reality.

I was researching a novel that was about a young woman who discovers a home movie and becomes obsessed with people in the film. It was a result of researching the way in which old film deteriorates that I remembered my parents had some home movies in a closet. Then I started to wonder if they still existed and began searching. I found several that were in bad condition but the one from my grandparent’s vacation in 1938 was unplayable. The way that I had understood what I was looking at was that many of the movies had been transferred to VHS in the early 1980s. But like so many family movies that were transferred to [new technology] we never watched it!

What occurred to you when you saw it?

The minute I saw the date and the footage from Poland, I realized that this was extraordinary, important and something of real historical value. I thought, my god, this is 1938. One year later the war begins and the vast majority of the people I’m looking at are going to be killed.

What prompted you to donate the film to the USHMM?

It was not something that we could care for. It was in bad condition and I wanted to get it restored. When I got in touch with the UHSMM they were immediately interested and were willing to restore not just those three minutes but also the entire film. Their mission is to make footage available to the general public, which was important to me. The images of their faces are so clear and precise I immediately felt the urge to know who these people were.

The film shows children from the town excitedly clustering around your grandfather.

I think they were excited that an American was coming to visit, which was a novelty in itself and that he had a movie camera no less! That was something extraordinary to them and they’re sort of bursting with joy to get in the picture. My grandfather, who I never met—he died before I was born — was born in Nasielsk but left as a small child in the 1880s. He spoke Yiddish so I’m sure he told the people that he was born there.

Even though your grandparents never spoke of this trip to you, they made a specific effort to visit their hometowns.

When I started the project, I assumed that my grandparents didn’t really give much thought to where they were from, but in the course of this research I discovered that they had gone to Europe in 1937 to visit my grandmother’s home as well. I have a photo from that trip and she has an expression of such contentedness and love on her face that she obviously knew and cared about the people in that town. They went considerably out of their way to visit their hometowns so it was clearly something important to them.

Did your grandmother ever say anything to you about the war?

The only information comes from my aunt, their daughter, who said that at the end of the war, she asked my grandmother about the people in Poland. My grandmother responded, “They’re all gone.” That’s all she would say. At first I took that as a sort of dismissal; kind of “We shouldn’t think about it.” But the more I learned, the more I hear it as an expression of trauma—a repressing of the thought of it, rather than a dismissing of it.

In 1933 Hitler was appointed chancellor and there was a nationwide boycott of Jewish-owned business. Just two years later Nazis revoked political rights, making Jews second-class citizens. Do you think your grandparents had any sense of dread?

I can’t say with any confidence that my grandparents had any privileged insight into what was going to happen. I think they just went to visit their hometowns. There is one postcard from the ‘37 trip when they had stopped in Berlin and my grandfather wrote, “Of all of the places we’ve been, Germany is the craziest.” I’m not sure how to interpret that. All the signs could be there and you still can’t add it up until in retrospect it becomes obvious.

You spent more than two years doing intensive archival research without much luck in finding any of the people, until one day someone contacted you.

In 2011 I got an email from a woman who had seen the film and immediately recognized the face of her grandfather as a 13 year-old boy. Her grandfather, Maurice Chandler, was the only member of his family to survive the war. He had no photographs of himself as a child or his family. She recognized him 73 years younger! I immediately called her and she put him in touch with me. The first thing he said to me was, “You’ve given me back my childhood.” The war and the loss of his entire family overshadowed everything that ever came before and it was as if he didn’t even remember that he had been a child. I called him the Rosetta Stone, because he was able to bridge the gap between the documents and the images and the real life that was there. He recognized people in the film and was able to tell stories about their lives. He has an extraordinary memory and was a fundamental resource that allowed me to develop the history through New York to Poland to London to Tel Aviv.

Many people have commented on the meticulous research you did. In your search the smallest piece of information led to entire narratives. How would you describe the hunt?

It was thrilling and part of that is the researcher’s thrill of finding pieces that fit. But much more than that was being in the position to return memories, photographs or some kind of documentation to people about their own lives that they didn’t have. I remember one man in Israel, who was terminally ill with cancer and in very bad shape. When I showed him a photograph in an album, he leaped out of his seat because it was his father. He hadn’t seen his face since 1939. I never expected that the fragments that I gathered would eventually link up. It was like a million-piece puzzle. It was an extraordinary experience and the emotional rewards of being in a position to do this for someone was just profound.