AIDS Crisis Through a Comics Lens 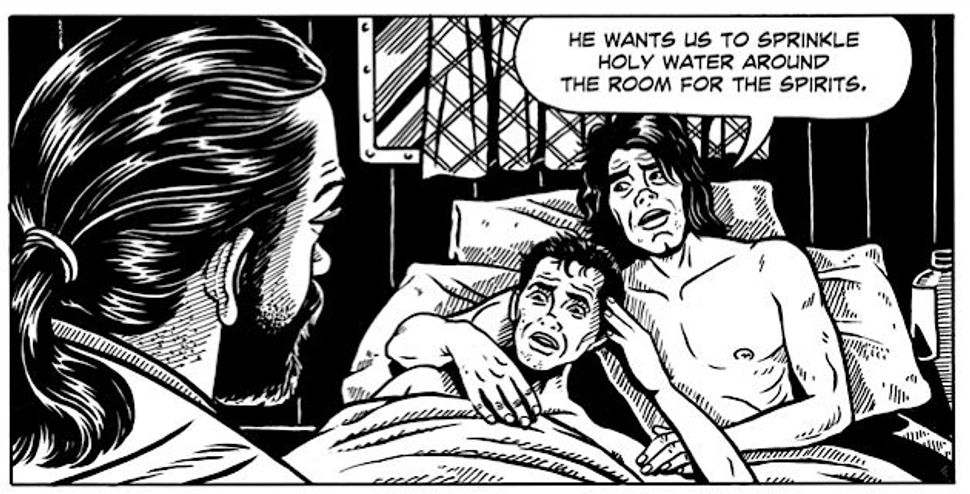 “Joyce Brabner, best known as Harvey Pekar’s widow and collaborator, has released a graphic novel about early efforts in a New York gay community to fight the AIDS epidemic.”

For a fan of Brabner’s work, the Plain Dealer’s praise feels double-edged. Three years after her late husband’s death, Brabner still gets tagged as his widow rather than a key comics figure in her own right.

Second Avenue Caper fits squarely in that tradition. Set in Manhattan in the darkest early days of the HIV/AIDS crisis, Brabner’s vivid script tells the story of a band of friends – her friends – who plotted to smuggle illegal drugs from Mexico to help beloved comrades desperately ill and abandoned by the medical establishment. The story unfolds through the account of Ray, a male nurse and drag-show producer; his Jewish partner, Benny, becomes a collaborator.

Characters disappear the way Brabner’s circle did at the height of the epidemic. Zingarelli’s realistic, classical style gives the story an unsentimental edge that only amplifies its power.

Second Avenue Caper is Brabner’s first solo project since her husband’s death. The writer spoke with the Forward from her home in Cleveland Heights, Ohio.

Michael Kaminer: Is it a stretch to say that in terms of fighting tragedy with humor, Second Avenue Caper feels like very Jewish story?

Joyce Brabner: I’m one of these people who can’t deal with hardship or burden without a certain kind of gallows or black humor. Is that Jewish? Absolutely. But it’s shared by victims of other genocides. Survivors in Cambodia have it, when it’s safe to express. Some people don’t understand it. It can appear on the surface as tasteless. I once made a joke about my relationship with Harvey and his cancer. He required a tremendous amount of care from me through radiation and all of these treatments.My joke was, “Harvey had to shake and bake, and I helped.” People who got it, got it. But others scolded me.

In order to relive this particular story — ravaging illness, relentless tragedy — you have to laugh. The only way to keep your head above water is to use humor.

Did you consider drawing the story yourself?

I draw like a writer [laughs]. I chose this particular artist for a lot of reasons. One is his warmth and compassion. Two, we’re the same age. We lived through things that a younger person wouldn’t get. Mark also has a very straightforward, clear style I could call upon. While I know comics are capable of different kinds of things, I wanted this to be straightforward. I think he did a fantastic job. Mark is one of these people who’s been in comics since Bob Crumb’s “Weirdo.”

The book also feels like an elegy for a New York City that no longer exists.

The Lower East Side, where the book stakes place, is totally different place. At the time, it was full of people from Communist-led countries. You could buy groceries. Now it seems like all the buildings have been emptied out and put on hold for retail development. The neighborhood spirit has been crushed.

At the same time, the camaraderie of outsiders against the world fades with acceptance. You could say this is a Jewish thing, too. In some ways, people from that time have more or less assimilated. That also has to do with countrywide acceptance and rethinking of queer people.

Is it a coincidence this book coming at same time as other memoirs about the early days of the AIDS crisis?

My book would have come a lot earlier if I hadn’t had to take care of Harvey. I put my so-called career on the shelf to take care of someone’s unwanted child (Brabner adopted a daughter, Danielle, in the early ‘90s) and a husband who had really critical health issues. I was writing this book in 2006. Comics have a delay in them to start with.

The Plain-Dealer opened its review of Second Avenue Caper by stating “Harvey would be proud.” It almost made it sound like the book needed his benediction. Do people ever get past the relationship with Harvey?

I’m a mature enough feminist not to fly off the handle. What Harvey was and what [“American Splendor”] was – I was very much a part of his success and the creative process. I essentially wrote “Our Cancer Year,” and then I went back over it with Harvey and we added stuff to it. It will always be perceived as Harvey Pekar’s masterwork because he was the one with the tumor and the big name. It’s very provincial.

Harvey was damn proud of me. He agonized constantly that he was holding me back. I don’t feel that time spent helping a partner through cancer — or any work a woman does — has no value. If she wipes a counter in the kitchen, it has just as much value as someone sitting at an iMac writing deathless prose. It’s about choice. Did I choose to put myself at Harvey’s side rather than in front of him? Sure. Frankly, if he hadn’t been as successful a writer, or as good as he was, I wouldn’t have been with him. I require a lot of intellectual stimulation. And I‘d been with a lot of guys who said they were going to do great work, but expected their wives to support them.

I do wish they would see me when they wrote about my book. But I also want them to see the people I’m writing about. I am who I am. However people see me, or get to know me, fine.

The author bio inside “Second Avenue Caper” says you’re not as serious as actresses have made you look — Hope Davis, famously, portrayed you in “American Splendor.” Can you elaborate?

I think “character Joyce” as portrayed in the movie is an aspect of myself. I can be very self-contained, and I think Hope saw that during the time she observed me. But you’ve talked to me, and I think you know I have a bit of a spark of life [laughs].

But they could have had “character Joyce” do anything in the movie and I wouldn’t have cared. It wasn’t a movie about me. It was a movie about Harvey.

AIDS Crisis Through a Comics Lens