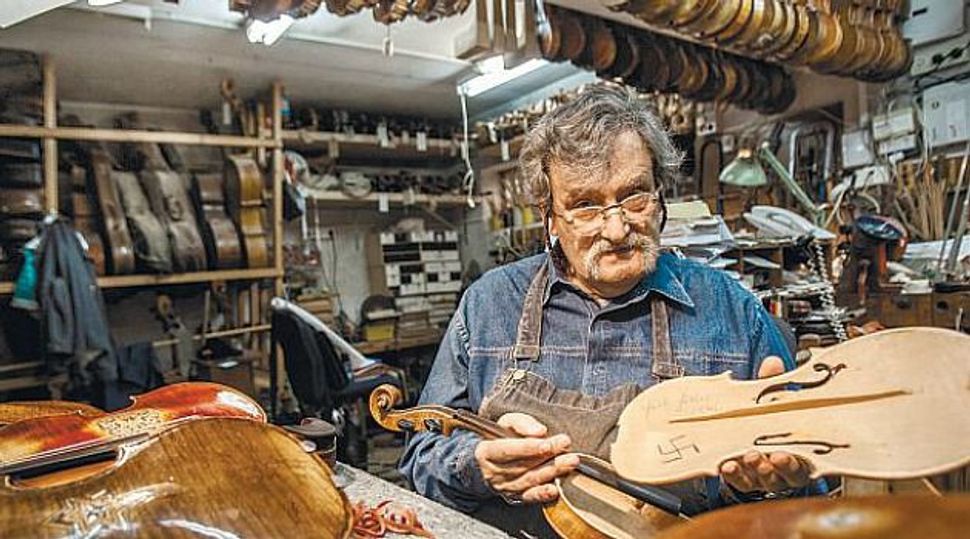 Amnon Weinstein has devoted his life to researching and collecting Holocaust-era violins. Image by Nir Kafri/Haaretz

Amnon Weinstein has devoted his life to researching and collecting Holocaust-era violins.

(Reuters) — A violin thrown some seventy years ago from a train transporting French Jews to the Nazi Auschwitz death camp will sound in the concert hall of the Berlin Philharmonic on Tuesday night, along with other instruments once played by victims of the Holocaust.

A French railwayman caught that unknown passenger’s violin and gave it to his daughter to play.

Years later it found its way into the hands of Israeli violin-maker and restorer Amnon Weinstein, whose extraordinary collection comprises violins embodying their former owners’ tragic histories and stories of survival.

Tuesday marks 70 years since the liberation of Auschwitz by Soviet troops. Around 1.5 million people, mainly European Jews, were gassed, shot, hanged and burned at the camp in southern Poland during World War Two.

Tuesday’s concert will also feature one of Weinstein’s violins that had belonged to a member of Auschwitz’s prisoner orchestra.

The orchestra played while inmates were marched to work and to entertain guards. The ability to play often saved lives.

Like his violin-maker father Moshe, who was born in Vilnius but emigrated to Palestine, Amnon initially wanted to let his family history rest. Every relative that had remained in eastern Europe died in the Holocaust.

Then in the 1980s, a man walked into Amnon’s workshop who told him he had played his violin in Auschwitz. He hadn’t touched the instrument since, but wanted to pass it down to his grandson in good condition and gave it to Weinstein to restore.

The front was damaged from having been played in snow and rain. When he took it apart, Weinstein found ash inside.

Later, and encouraged by a German bow-maker working with him, Weinstein began to research the history of some of the German violins already in his father’s workshop – instruments which Jews fleeing Europe could no longer bear to play, and had sold on arrival in Tel Aviv. Nobody in Israel wanted them.

Some of the violins which will also be played on Tuesday followed their former owners half away around the world through decades of homelessness and exile. The collection is known as the “Violins of Hope.”