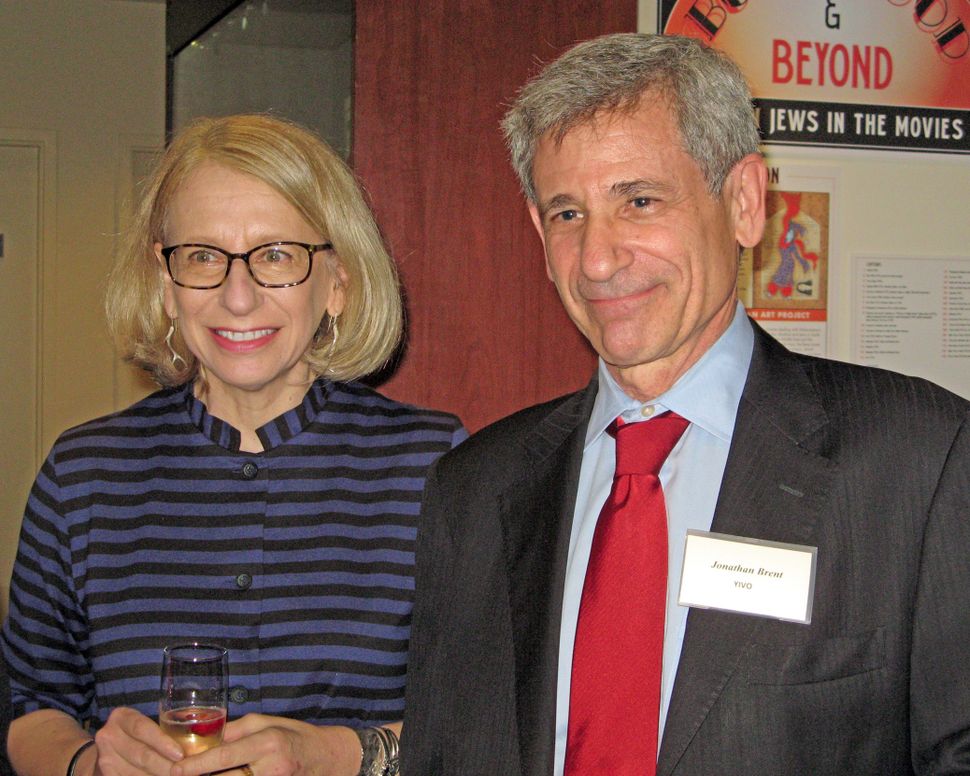 “I didn’t know who YIVO was,” said The New Yorker staff cartoonist Roz Chast honoree at YIVO Institute for Jewish Research 90th Anniversary Gala at the Center for Jewish History.

“So I googled it…What came up was that YIVO is a character on a planet in a cartoon series Futurama! Also honored that evening was Leon Botstein, president of Bard College, whose long list of credentials includes music director of The American Symphony Orchestra. A Yiddish maven, he noted that YIVO was founded [in 1925 in Vilno, Lithuania] “when there was the realization that Yiddish was on the run against English in the U.S. and Hebrew — via the Zionist movement.”

“If we can be as successful as Greek and Latin,” posited Botstein, “we can actually use the study of the language to revoke, to idealize the classical heritage…to take from the well of cultural diversity and disagreement, envy, mistrust and solidarity of the great cultural, literary and musical, political, fantastical accomplishment of that civilization as represented by the Yiddish language and the archives at YIVO… [Yiddish] is a language of people surrounded by fear and by enemies and its internal sense of irony is natural.. The pariah status for so many years gave the Yiddish language the appreciation for seemingly unimportant details — to poke fun without truly offending you… to find humor in the grimmest of circumstances… and in fear as victims — gave the language a life which is uniquely its own.”

“When I appointed I.B. Singer to the faculty, my grandfather did not approve because he thought his brother [I.I. Singer] was a far superior writer and I.B. was a clever pornographer.” [Since both brothers had the identical first name initial, “I”— to claim his own identity, future Nobelist I.B. Singer added the “B” — after his mother’s name Bathsheva]. 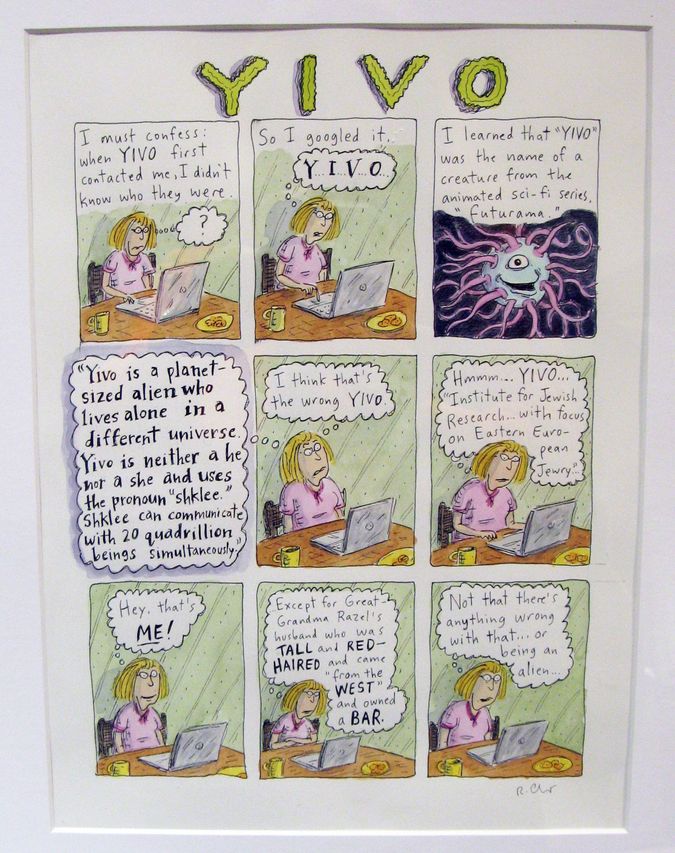 Chast was introduced by The New Yorker Cartoon Editor Bob Mankoff with: “Roz is looking for an award every week. We get about 1,000 cartoons every week — Roz gives us 6-7-8 and nobody knows which get picked.”

Chast recalled: “Yiddish was my parents’ secret language when they wanted to say things about my behavior — ‘geyn shlofen’ [go to sleep] when I was cranky. They did not want to discuss religion except on a superficial level: ‘I’m Jewish. Daddy’s Jewish. You’re Jewish, end of story.’ Asking too many spiritual questions meant you had too much time on your hands… My mother would say ‘When you’re dead, you will know.’ My parents’ parents came here at the turn of the century with nothing… Bitter, angry, grandfather was a presser, grandmother washed clothing for other people. My father’s family — his mother — one of 9 children — was not just the only girl but the only one to survive the Russian cholera epidemic. Her father’s throat got cut ear-to-ear by bandits. The Depression, WW II — it’s amazing they were not crazier than they were.”

She told her grandfather’s story of watching the building of a train in Russia. Seeing the train move without horses —the peasants looking for horses under the train who started screaming, wailing in terror, fell on their knees and cried to God to protect them from that monster.

The good news was announced by YIVO executive director Jonathan Brent. With the help of a jaw-dropping documentary “Embers” by Peter Forgacs about the rescue of “The living embodiment of the memories of 1,000 years of Jewish life in Eastern Europe and Russia” he detailed, YIVO’s seven year project to digitize 10,000 rare and unique books and 15 million documents in Vilnius, and in New York — “the largest archive of pre-war Eastern European and Russian Jewish history… Though ravaged by Nazis and nearly destroyed by the Soviets, much of it was miraculously saved — the larger part discovered in post war Frankfurt, Germany by the U.S. Army. The remainder, found in Vilnius (Vilno) after being hidden by a Lithuanian librarian in the basement of St. George’s Church!”