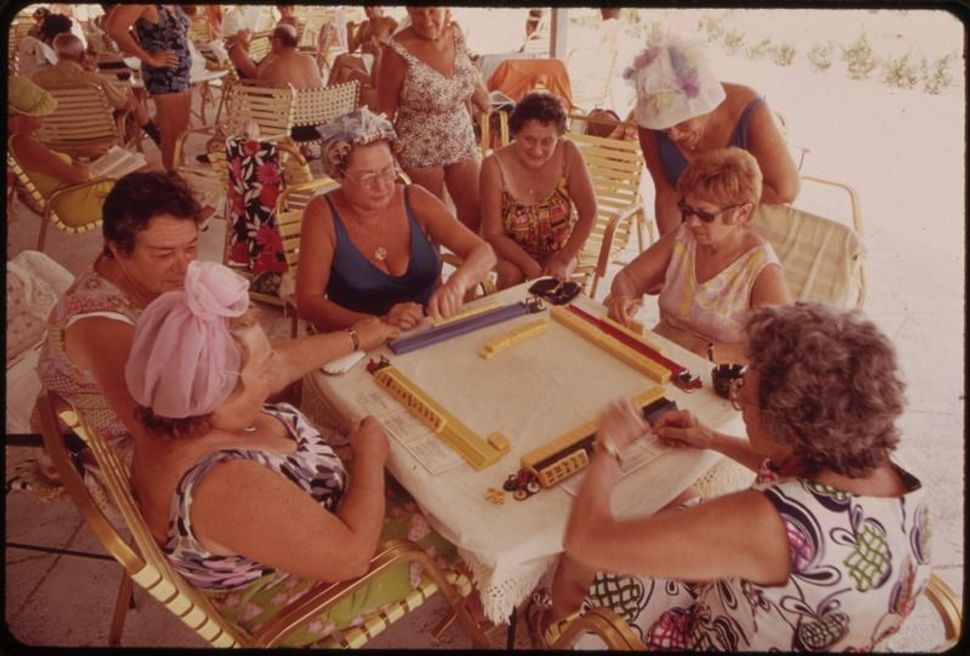 ‘Playing Mah-Jong at the Clubhouse of the Century Village Retirement Community’ by Flip Schulke. Image by Wikimedia Commons

That is now a very real question for Lee Delnick, Bernice Diamond, Helen Greenspan and Zelda King (ages 87 to 95) after their weekly game of mahjong was interrupted by a police raid.

The women were told to pack up their dominos and leave the Escondido Condominium clubhouse in Altamonte Springs, Florida, where they have gathered regularly for some time, . The charge? Violating a local ordinance prohibiting playing mahjong for money.

Apparently, an anonymous Escondido snitch (call him the busybody in Building 11) tipped off the authorities to the ladies’ shady activities.

The four women did as they were told — begrudgingly. “This is ridiculous,” King complained. “We haven’t played in the clubhouse for weeks! We have to go to each other’s homes to play and not everyone lives in Escondido.”

“It is an international game and we are being crucified!” she added.

King has a good reason to be outraged. She explained to the Florida Jewish News that her neurologist has told her mahjong is a good way to “delay and possibly prevent dementia.”

We reached out to the National Mah Jongg League for comment. Turns out they “don’t do email,” but they did encourage us to fax them a query on letterhead.

In the end, all’s well that ends well. The Florida Jewish News did some digging, and it turns out that there is in fact no ordinance prohibiting gambling on a Chinese game of tiles favored by elderly Jewish women. Here’s how they broke it down:

“It appears there is no ordinance in Altamonte Springs against mahjong gambling. In fact, the only ordinance found by the Heritage was in the Florida Gambling Laws, Statute 849.085, which states: “Certain penny-ante games are not crimes; ‘Penny-ante game’ means a game or series of games of poker, pinochle, bridge, rummy, canasta, hearts, dominoes, or mahjong in which the winnings of any player in a single round, hand, or game do not exceed $10 in value. (The ladies have a $4 limit).

“Dwelling” means residential premises owned or rented by a participant in a penny-ante game and occupied by such participant or the common elements or common areas of a condominium, cooperative, residential subdivision, or mobile home park of which a participant in a penny-ante game is a unit owner. (No problem there. Several of the ladies live in Escondido and pay homeowners association dues, which allow them access to the clubhouse.)

A penny-ante game may not be conducted in which any participant is under 18 years of age. (The ladies are well over that age).”

You will be happy to know that our favorite feisty bubbes have been cleared to return to the clubhouse and will be resuming their weekly games after Thanksgiving. Mazel tov.