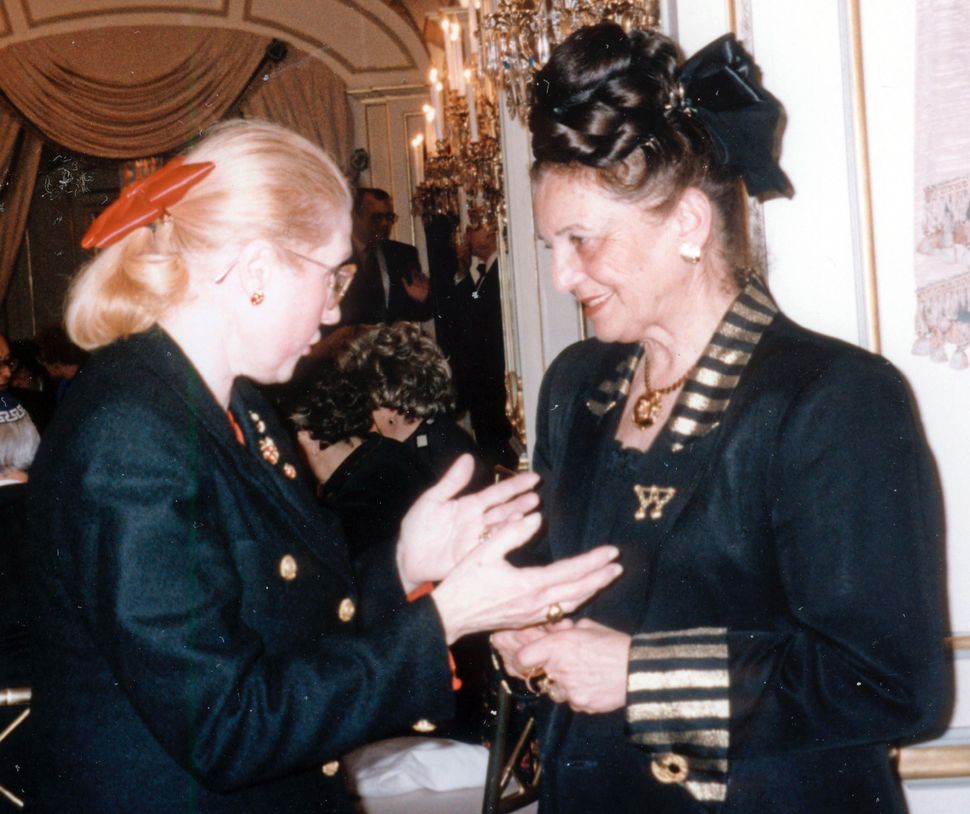 Yaffa Eliach—Holocaust survivor, professor and longtime friend—who died on November 8 at seventy-nine—was a unique Holocaust memorialist. Her 800+ page tome “There Once Was A World”—a meticulous revisit to her 900-year-old shtetl Eishyshtok—has the heft of memory. But it is her 1982 “Hasidic Tales of The Holocaust’ (Oxford University Press) with its documented oft ”supernatural” survivors’ tales that continues to resonate for me to this day—most profoundly, the moral parable “Good Morning Herr Muller.”

Ever elegant and sporting her version of an enhanced hair bun that gave petite Eliach height, poet, a playwright and professor of Judaic Studies at Brooklyn College (who also served on President Carter’s Holocaust Commission) was keynote speaker at a gathering of survivors at the 1991 Hidden Children’s Conference held at the French Consulate. There was a gasp when she lamented: “ If Anne Frank’s family had separated, Anne Frank might have been the speaker here today.”

From her “Hassidic Tales” stories, she recounted how [baby] Shachne Hiller had in November 1942 been entrusted to a childless Catholic couple, Mr. & Mrs. Yachowitz. At great risk to themselves they cared for the child to the end of the war. When the parents did not return in 1945 the wife approached a young priest to baptize the boy. Realizing that this was a Jewish child, the priest told the woman that she must honor the request that in the event of the parents’ death, he should be reunited with his family in America and raised as a Jew. In 1949 he was adopted by a relative in Canada and “lived as an observant Jew and a successful businessman.” The young priest was Karol Wojtyla— later known as Pope John Paul II.

Apropos, Eliach recalled that in October 1981 Rabbi Israel Spira of Bluzhov then in his 90’s told her that God had rewarded this gallakh [priest] for saving a Jewish child and that’s why “He made him Pope’” said the rabbi who died the day before his 100th birthday. Eliach posited: “See, you do a favor for a Jew and he always remembers.

The story prompted me in 1991 to write to Pope John Paul about the nameless Polish woman who during the winter of 1940 had risked her life to hide and save my mother and me during our flight from Nazi-occupied Warsaw enroute to Soviet-occupied town of Byten [in what is now Belarus]. I included a copy of Eliach’s “The Merit of a Young Priest”. A letter arrived from Msgr T. Mariucci at the Vatican informed me that “His holiness Pope John Paul II” appreciated the sentiments of the story and invoked God’s blessings upon me. When I later told Eliach, she smiled and told me that when she had called the Pope about that story “ he told me, ‘I love the Jewish people’ and he uses that story wherever he goes.’”

Eliach’s grandmother had been the shtetl’s photographer and she wanted to rescue as many photos as she could as a “memorial” to the shtetl. Refusing copies—she traveled all over the world to find former [Lithuanian] Eishyshok’s original family photographs of individuals, weddings, and family celebrations. They now grace the three-story high “Tower of Faces” —one of the most heart wrenching exhibitions at Washington’s U.S. Holocaust Memorial Museum.

As for “Good Morning Herr Muller”: It tells the true story of a Hasidic rabbi in Danzig who during his daily walk would offer a “Good Morning” to all he passed—including a Herr Muller—a Polish Volksdeutsche (ethnic German) field worker. Fast forward: The Rabbi—skeletal in striped Auschwitz camp uniform—is on line with hundreds of Jews awaiting a “life-death” selection. Suddenly “he heard his own voice say “Good morning Herr Muller!” The S.S. man responded “Good morning, Herr Rabbiner!” The next day the rabbi was transferred to a safer camp. The message: “A man must always greet his fellow man.” Many a life was saved during WWII thanks to a variation of a “Good Morning Herr Muller” exchange.