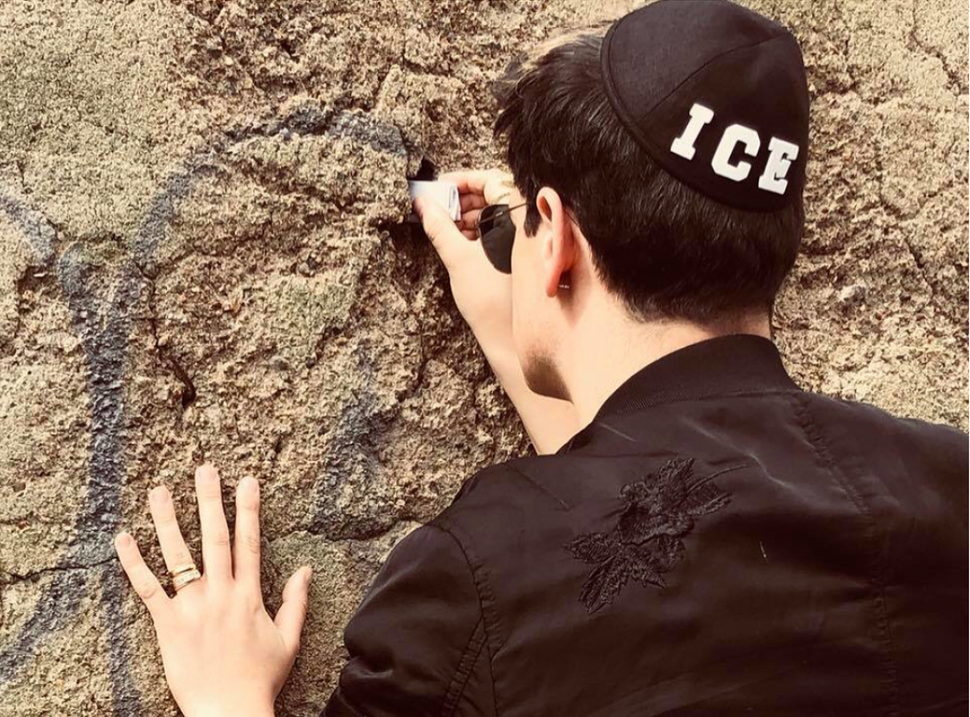 Yiannapoulos, not at the Western Wall. Image by Instagram

Alt-right activist Milo Yiannopoulos staged a photo-shoot for social media this week in which he put a letter in a mock Western Wall, asking for “speedy deportations.” The 33 year-old who has said of sexual relationships between 13 year-olds and adults, “these things do happen, perfectly consensually,” wore a kippah emblazoned with the acronym “ICE,” indicating his allegiance to the US Immigration office that has recently increased deportation efforts.

The antics of a supremely addled-seeming man-child whose greatest claims to fame is a flailing writing career and a failure to befriend the really cool nazis, are hardly interesting. The interesting thing about anti-semitic and hate-filled acts by Yiannopoulos, who has some Jewish heritage, is not that he does them but that a number of his fans are Jews themselves.

“TO THE DADDY IN THE SKY — Grant us speedy deportations. Promise us an end to liberal jurists overturning Daddy’s executive orders. Deliver us from MS-13, the rapists, the murderers and the drug runners. Grant serenity and peace to the Angel Moms and to your valiant warriors on the front lines – the men and women of ICE. Love and kisses! — MILO”

Reading the comments on social media posts is hardly an exact science. But the comments on Yiannopoulos’ three images of his “Western Wall” visit on Facebook and three similar posts on Instagram are so full of comments by enthusiastic Jewish fans that it is worth some attention.

Responding to the posts, commenters wrote in about the particulars of halacha and quibbled about the Hebrew in Yiannopoulos’ Google translated note. Jewish social media users wrote in praising Milo and Trump, and Israeli fans lobbied for Yiannopoulos to visit the real Western Wall and to plan meet-ups for Jewish fans. Numerous Hebrew speakers offered to translate next time (a check-in with Hebrew speakers in the Forward office confirmed that the note is mostly a triumph for Google translate, though it stopped short at handling the phrase “drug runners.”) Jewish Americans and Israelis heaped praise on the post, and their praise sat next to praise by anti-semites whose comments bled into comments by anti-Zionists, whose comments bled into comments by Christian Zionists. Another day, another pocket of tens-of-thousands of people who support maniacs on the internet. Yawn. The only odd thing is that so many Jews, and particularly so many Israelis, seem to want to join up with white supremacy, a movement that historically doesn’t end well for Jews.

Yiannopoulos’ trolling is subversive and funny according to his followers, and that’s no surprise. But why would any Jew, not to mention a significant number of the commenters on each post, like it? A non-Jew, looking at the images, might see a people’s hero making an irreverent statement. But a Jew with even a day of Sunday school under her belt should see a man who hates himself leaning against a mockup of a wall that represents bitter centuries of Jewish homelessness, of immigration without cessation, of a God who was slow to answer prayers. That any Jews can forsake that memory and believe they will ever be accepted into a racial purity movement is as sad and as funny as a homemade Kippah that says “ICE” on it.