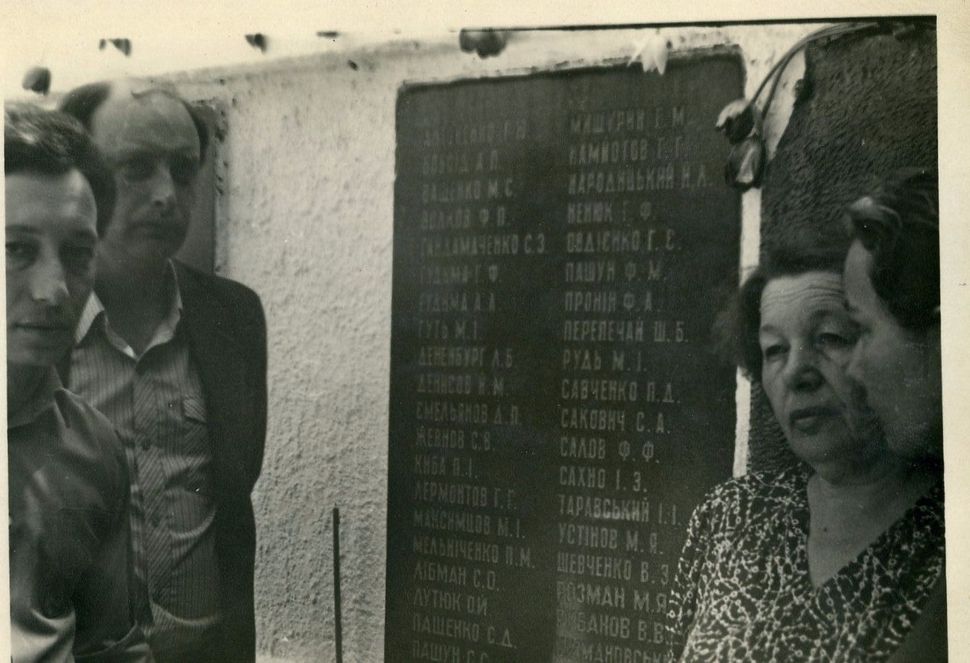 My Family’s Life After the Evacuation from Chernobyl

My family visiting the monument to fallen soldiers in the central park, May 9th after the evacuation. My grandmother’s father, Shmul Perepechay, is listed here. Image by Mikhail Khandros Lilies of the Valley growing by where my family used to live. My grandfather tried to plant these flowers in front of his apartment building after immigrating to America, too. Photo by Anna Khandros My third time visiting Chernobyl and my great grandmother’s grave, October 2016. My grandfather engraved a Lily of the Valley, the type of flower he planted in their backyard. I’ve loved these flowers for as long as I can remember and didn’t realize why until I returned to Chernobyl and saw them growing by where the house once stood. Photo by Dmitriy Galin My family in front of the house my grandfather built in the 1960’s. Photo by Mikhail Khandros My family visiting my grandmother’s mother’s grave (Berta Perepechay, 1907-1978), on May 9th following the evacuation. This is the only grave I’ve found so far. Photo by Mikhail Khandros My family visiting the monument to fallen soldiers in the central park, May 9th after the evacuation. My grandmother’s father, Shmul Perepechay, is listed here. Photo by Mikhail Khandros My tour guide Serhiy helped me find Ostroskogo Street, but I didn’t yet realize that the house my grandfather built is no longer there (it was no longer there when my family immigrated to the U.S. in 1993). I’ve heard a couple of different stories as to why, but the one my family chooses to believe is that it was burned down due to a high level of radiation. Photo by Serhiy Teslenko Searching for remains of my family’s house in 2016. Photo by Anna Khandros Mass grave, which is right by the Jewish section of the cemetery. Photo by Anna Khandros Waiting to enter the exclusion zone in May, 2016. Photo by Anna Khandros Me and my dad, Kyiv, likely 1991. He died shortly after this photo was taken. Moving back to Kyiv and learning about Chernobyl has, in a way, allowed me to form memories of him. Most Chernobylans that I spoke with remember him fondly and regard his work as a talented musician. Photo by Anna Khandros This is part of the memorial that was erected in the center of Chernobyl for the 25th anniversary of the accident, October 2016. Prior to the 1917 October Revolution, many Jewish homes stood on this street. After the evacuation, they remained in fine condition but were demolished for this monument. Photo by Alexander Krasnitsky “Here lie the ashes of citizens brutally murdered by the fascists on 11/19/1941.” Photo by Anna Khandros Mikhail Khandros in his Brooklyn apartment, April 2017. To his left is his granddaughter Mira, named after my grandmother, who passed away in 2005. My grandfather’s photograph hangs at the Chernobyl Nuclear Power Plant, under the words “Our heroes: they didn’t leave their workplace.” Photo by Lena Khandros Jewish families visiting the communal grave, 1980s. The tall man on the right is Abram Khabensky, whose parents and three brothers were killed on November 19, 1941. Photo by Mikhail Khandros

My Family’s Life After the Evacuation from Chernobyl