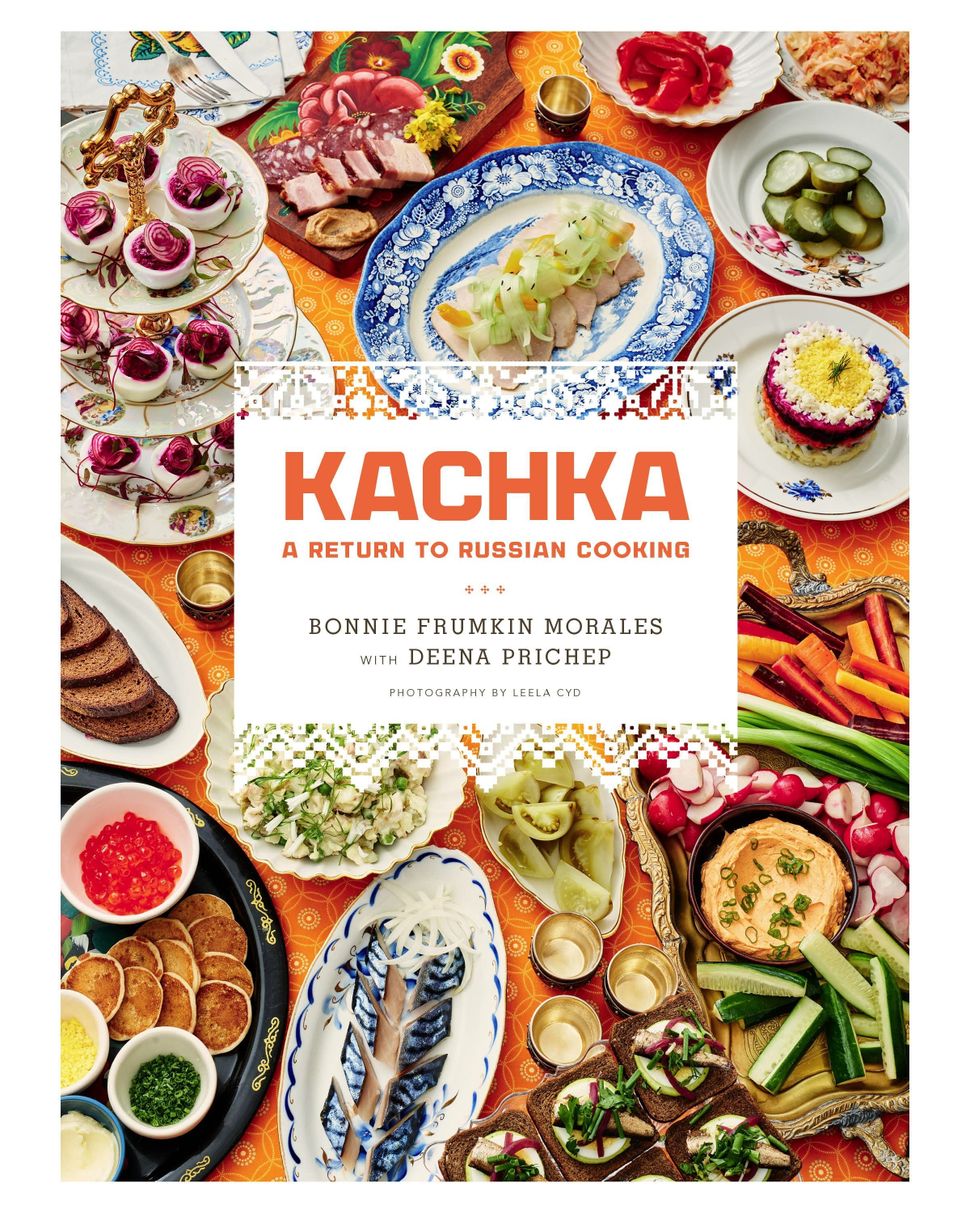 If you come from Russian stock, then raise a glass of vodka to chef Bonnie Frumkin Morales, whose Kachka has become one of the most popular restaurants in Portland, Oregon. Morales — who is the first-generation daughter of immigrants from Belarus — has given her native cuisine a locavore update, to great results. The name Kachka, which means duck, comes from a harrowing tale of how the chef’s father’s mother escaped death by knowing the word for duck in Ukrainian (it was the same as in Belarusian) when she was trying to pass herself off as Ukrainian. “Kachka: A Return to Russian Cooking,” which she wrote with Deena Prichep, features all the dishes you’ll see covering a table in a typical Russian spread: herring; dumplings, potato and radish and beet salads; pieroshki and more. Husband-and-wife team Dean and Maya Jankelowitz are the proprieters of two cafés in downtown Manhattan, both named after Dean’s grandparents, Jack and Freda. Earlier this year, the couple published their cookbook, “Jack’s Wife Freda: Cooking From New York’s West Village,” with recipes by their chef, Julia Jaksic. Dean is from South Africa; Maya is from Israel — the book features dishes that reflect both cuisines, with some Ashkenazi standards thrown in for good measure. One highlight is bacon and lardons made out of duck. (Having said that, while pork is not present you will find other treyf.) Image by With 11 Jewish cookbooks under her belt, Joan Nathan’s name has become synonymous with Jewish cuisine. And “King Solomon’s Table” may well be her most ambitious book to date. Nathan travels the globe in search of the best recipes Jewish cuisine has to offer, allowing us to taste recipes from the Jews of India and the Arab world without leaving our own kitchens. This book would be a wonderful addition to the cookbook collection of anyone looking to expand his or her conception of all that Jewish food really is. Image by Kudos to Emily Paster, a Chicago-based food blogger (“West of the Loop”), for recognizing that the topic of Jewish preserving hadn’t been widely covered. Paster is both a Jewish food aficionado and a frequent canner, and she combined her two loves in “The Joys Of Jewish Preserving.” Paster grew up Ashkenazi, and says she particularly enjoyed researching less familiar Sephardic canning traditions, writing that one of her favorite recipes in the book comes from India’s Bene Israel community: quick-pickled eggplant. There are also plenty of recipes and methods for jams and preserves. Image by Leah Koenig told us that she was looking for a way to “bring a sense of fun and playfulness to this party-worthy, celebratory aspect of Jewish cuisine.” With “Little Book Of Jewish Appetizers,” a mini-collection of 25 recipes, she expands our notion of the pre-meal nosh, taking it way beyond the usual chopped liver. In her previous book, “Modern Jewish Cooking,” Koenig made her mark by emphasizing that Jewish food can and should include many more vegetables, and this book continues to promote that philosophy. Image by Guava and cheese babka is a great example of what you can expect from Shannon Sarna’s “Modern Jewish Baker,” as is her pull-apart spinach and cheese challah. These are the classics, to be sure, but brought into the 21st Century with twists and additions that most of us might never think of. Sarna’s recipes may cause eye-rolls in some parts — we can imagine bubbes almost everywhere questioning the harissa and goat cheese rugelach. But for those willing to venture into new territory, this book is definitely worth a look. Image by A salted-tahini doughnut is a great entrée into “Federal Donuts: (The Partially) True Spectacular Story” by Israeli-American chef Michael Solomonov along with Steven Cook, Tom Henneman, Bob Logue and Felicia D’Ambrosio. After the success of the “Zahav” cookbook, the team seemed to think that the improbable story of how they created a wildly popular doughnut-and-fried chicken place in Philadelphia — when they had never made doughnuts before — would resonate with readers. Tales about meeting a stranger from Craig’s List in a parking lot to buy a “donut robot” and other hilarity ensues within this funny little book that’s as much silly narrative as it is chicken-and-doughnuts cookbook. Image by There’s some halva in the brownie recipe and tahini in a baked chocolate tart, but “Sweet” by Yotam Ottolenghi and Helen Goh makes the list mainly because of the huge splash the Israeli-born Ottolenghi made with his London restaurants and megahit cookbooks “Plenty” and “Jerusalem.” The chef has legions of fans worldwide, who have waited a full two years since his last cookbook for this one. Since Ottolenghi trained as a pastry chef, he is equally adept at both sweet and savory dishes. Within the pages of this colorful volume are recipes for such desserts as a pineapple and star anise chiffon cake with dried pineapple “flowers” and a cinnamon pavlova with praline cream and fresh figs. Image by The story of how two women found a cookbook manuscript that captured their imaginations, and were propelled to breathe new life into it, sounds remarkably similar to the one behind a cookbook we loved two years ago: “The Vilna Vegetarian Cookbook.” But that’s where the similarities end. Cipe (shortened from Cipora) Pineles became a giant in the world of graphic design, and left behind a recipe book that the authors Sarah Rich, Wendy McNaughton, Debbie Millman and Maria Popova reimagined for a modern audience. While the recipes are typical Ashkenazi fare, the illustrations in “Leave Me Alone With The Recipes” are extraordinary — and Pineles, the first female art director of Condé Nast, is a woman worth learning about. Image by The food blogging universe is vastly different than it was in 2003, when Deb Perelman began Smitten, which later evolved into the blog “Smitten Kitchen,” and then the book by the same name. Unlike so many other bloggers who came on the scene at that time, Perelman is still incredibly popular: Scads of fans come out to see her at book appearances and she has hundreds of thousands of Instagram followers. With her new book, “Smitten Kitchen Every Day: Triumphant and Unfussy New Favorites” she reinforces the fact that there’s something about the voice of this self-taught, self-deprecating chef that’s so accessible as to make you feel like you have a close friend cheering you on in the kitchen. Image by If you come from Russian stock, then raise a glass of vodka to chef Bonnie Frumkin Morales, whose Kachka has become one of the most popular restaurants in Portland, Oregon. Morales — who is the first-generation daughter of immigrants from Belarus — has given her native cuisine a locavore update, to great results. The name Kachka, which means duck, comes from a harrowing tale of how the chef’s father’s mother escaped death by knowing the word for duck in Ukrainian (it was the same as in Belarusian) when she was trying to pass herself off as Ukrainian. “Kachka: A Return to Russian Cooking,” which she wrote with Deena Prichep, features all the dishes you’ll see covering a table in a typical Russian spread: herring; dumplings, potato and radish and beet salads; pieroshki and more. Image by