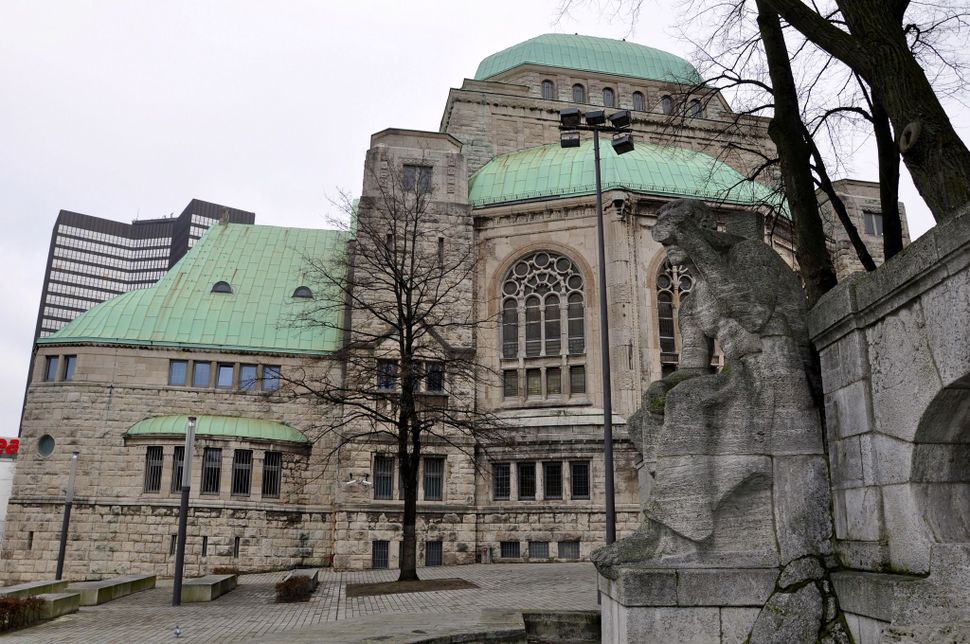 Before World War II, according to a German news site, there were about 2,800 synagogues in Germany. Now there are around 130. It’s a grim statistic, but there is cause for optimism. Since reunification Germans have a renewed interest in the Jewish history of their country. They’ve also welcomed an influx of Jews, mainly from the former Soviet Union. Thus many of today’s synagogues are new, and the older ones are often beautifully restored. Together they demonstrate the breadth and diversity of German-Jewish architecture. Here’s just a few of Germany’s unique synagogues, each an architectural gem in its own right.

This Bavarian university town has a lot of history. It was the home of Wolfgang Amadeus Mozart’s father, Leopold. Bertolt Brecht was born here, and it was the adopted home of Mietek Pemper, the Polish-born Holocaust survivor who helped compile Schindler’s list. The Augsburg Synagogue combines a Jewish center, a museum, and an active house of worship in one stunning building. Built in 1917, and rededicated in 1985, The Augsburg synagogue is an amazing combination of Art Nouveau and the Moorish style of Jewish architecture prevalent in the late 19th and early 20th century. This domed building with its light-filled interior emphasizes the confidence and taste of Augsburg’s prewar Jewish community. The museum provides information on Jewish culture, the history of the Augsburg’s Jews, and biographies of local families. It’s also Germany’s only Jewish museum within an active synagogue. This past April marked the 100th anniversary of this remarkable building. You can find more information on Augsburg here, and more on the synagogue and museum here. 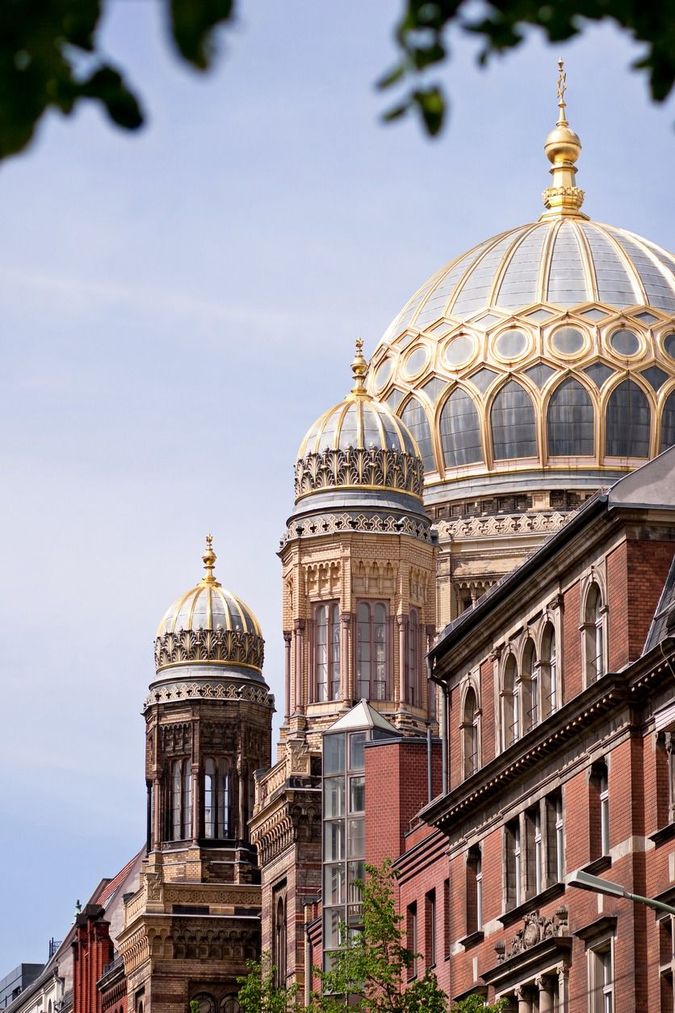 Everybody knows that Berlin is hip. What’s less discussed is the importance the Berlin holds in the long history of German Jewry. A prime example is the Moorish pomp of the New Synagogue, which evinces of the renewed attention to Jewish life in Germany, both past and present. Built in 1866, the synagogue managed to make it through the Holocaust and Allied bombing raids of World War II — but not without major damage. As with other German sites of Jewish interest, the New Synagogue’s restoration effort began in the 90s, culminating in its re-dedication in 1995. Today, in addition to the synagogue, the building houses a museum, an archive, classrooms, and offices for the local Jewish community. For detailed information about visiting the New Synagogue — and other fascinating sites in Berlin — click here.

Erfurt is a jewel-box of a city on the banks of the Gera River. Its charming city center is packed with beautifully preserved medieval buildings. It has a rich Jewish history as well. In 1998, archeologists quite literally found buried treasure, some 60 pounds of gold and silver that lay hidden for 650 years. Scholars believe that the Erfurt Treasure was buried by a Jewish merchant in the mid-14th century. It’s now on display in Erfurt’s Old Synagogue, parts of which date from the 11th century. Today, the Old Synagogue is a fascinating Jewish museum — as well as one of the most important and best-preserved examples of Jewish architecture in Europe. You can find more information on the Old Synagogue, as well as Erfurt’s other fascinating Jewish sites, here.

Like many former synagogues in Germany, This lovely Moorish-style stone building is now a cultural institution, with exhibitions on Jewish culture and religious practices. There’s also an archive devoted to Essen’s Jewish community. Its dome has an interesting acoustical quality — you can hear somebody whispering from the other side of the room, which probably made it helpful to know who wasn’t praying. You can get more information about this fascinating early 20-century building and its exhibitions here. 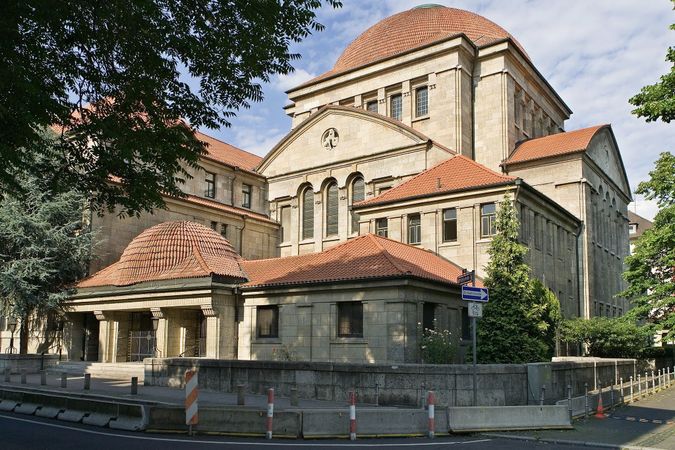 Image by Mylius via Wikimedia Commons

This thriving city boasts a number of sites of Jewish interest. One of the most interesting is the Westend synagogue. It’s an early 20-century building inspired by ancient Egyptian and Assyrian architecture. The main sanctuary is striking, richly ornamented in blue and gold. The synagogue is currently used by an Orthodox community. For information on visiting the Westend Synagogue, go here.

Hamburg has important connections to worldwide Jewry. The Hamburg-Amerika line ferried immigrants from Europe to the United States, a history reflected in the local emigration museum. And Hamburg’s Jewish community was instrumental in the birth of the Reform movement. In terms of German history, the synagogue at 120 Oberstrasse is a fine example of the Bauhaus style and its clean lines. Built in the late 1920s, the building is now the Rolf Liebermann Studio, a respected concert hall. You can see its event schedule here (in German). Even if you’re not seeing a show, the building is worth a look.

Leipzig is yet another German city with a Jewish history dating back to the Middle Ages. Leipzig is and was an important trading city, and in the mid-19th century, one-third of its merchants were Jewish. Many were pious Jews from the Polish city of Brody — hence, the Brody Synagogue. Once again the Brody Synagogue is a meeting point for a thriving Jewish community. To learn more about Leipzig and the Brody Synagogue, go here. And you can download a free English-language walking tour of Jewish Leipzig here. 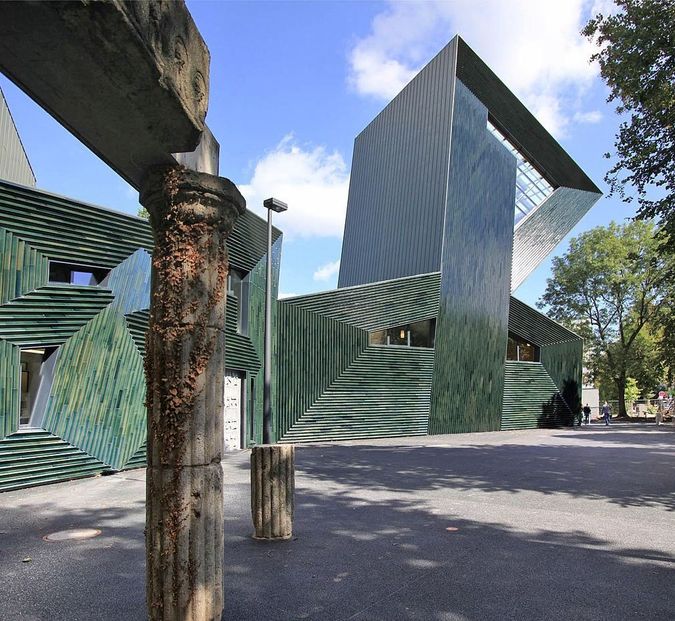 Image by Mdhz via Wikimedia Commons

In the Middle Ages, Mainz was an important center of Jewish learning. The Jewish Community Center of Mainz celebrates the city’s Jewish past — and present — with its striking collisions of geometric forms. Its cladding, ceramic tiles with transparent green glazing, lighten and soften the sharp angles of the building. The architects purposely surrounded the center with public space in order to emphasize its connection to the city, creating a kind of living sculpture. You can get more information on visiting Mainz here, as well as a fascinating discussion of the synagogue’s architectural symbolism here.

This starkly beautiful synagogue opened on November 9th 2006 — the 68th anniversary of Kristallnacht. The stone cladding of its cubic exterior evokes the dun walls of Jerusalem; the glass structure above represents the tents of the Hebrews as they crossed the Sinai. The synagogue is actually part of a complex, with a nearby community center and the Munich Jewish Museum, which offers wide-ranging insights into Jewish life and culture in this famous city.