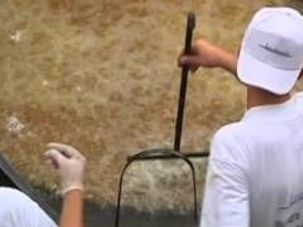 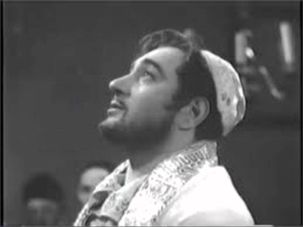 Moishe Oysher: Music Born in 1907 in Bessarabia, Imperial Russia (Moldova) and died in 1958 in New York. Although he may have come from a family of cantors going back six generations, he seems to have been drawn to the stage and popular entertainment from an early age. Oysher joined a Canadian travelling Yiddish theatrical troupe in 1921 and moved to New York City in 1923. By 1932 he had started his own company, entertaining in the USA and South America. After returning to the USA from Buenos Aires in 1934, he had difficulty finding work in New York’s Yiddish Theater. When he was offered the opportunity to sing for the High Holy Days at the First American-Rumanian Synagogue in NYC’s Lower East Side, he accepted the position and became a cantorial sensation! Despite his great success as a cantor Moishe Oysher was ever the entertainer and became quite famous for his starring roles in three Yiddish films including, “The Cantor’s Son” (1936), “The Singing Blacksmith” (1938), and “Overture to Glory” (1940). He was also a successful recording artist. Moishe Oysher was able to combine his passion for the Chazzanut with his love of performance, creating a crowd-pleasing style that thrilled audiences in synagogues and theaters. His recordings represent the world of our fathers and grandfathers who appreciated Oysher’s rich voice and fiery style.