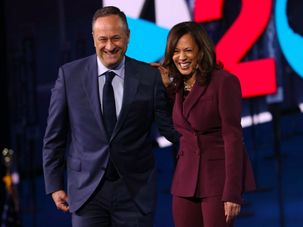 Doug Emhoff used the Yiddish appellation during a Lawyers for Biden fundraiser.

So you want to be a U.S. ambassador? Meet kings at fancy parties? Carry a black diplomatic passport?

Who's the toughest on Iran and who has time for that anyway?

The Israel Project took to Capitol Hill toady to launch its petition against Iran’s nuclear bomb. The initial invitation to the event stated that “all presidential candidates have been invited to speak” but none of them showed up in person. Barack Obama sent a staffer with a statement and the rest just emailed in their own. Actually, not all of them. Republican front runners Rudy Giuliani and John McCain didn’t even send a note, but their views on Iran are probably well known by now. The statements are strikingly similar: we will not agree to a nuclear Iran, if elected we will make sure they don’t get a bomb, we support divestment from Iran. Naturally, some are tougher than others -Newt Gingrich went all the way with the Ahmadinejad = Hitler comparison, while John Edwards, for example, spoke about “carrots and sticks” when dealing with Tehran. Some politicians did make it personally to the event: Democrats Brad Sherman, Eliot Engel and Republicans Jon Porter and Mark Kirk. They are probably less busy these days than their campaigning colleagues.

It's Official: Obama's On Top