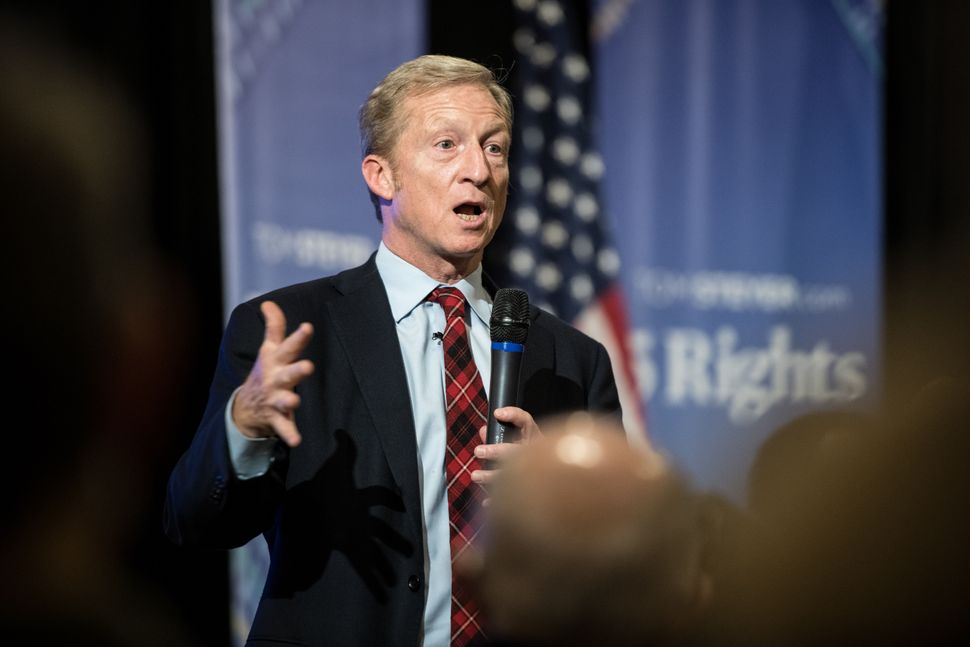 Tom Steyer, a prominent Jewish billionaire, left-wing activist and Democratic mega-donor announced this morning on Twitter that he will join the Democratic Race for president.

Steyer is a former hedge fund manager and founder of Farallon, a San Francisco-based investment firm. In 2012, he retired to focus on political and environmental advocacy. He had previously denied that he planned to run.

In the video accompanying his campaign announcement, Steyer said that he will emphasize climate-oriented action and decreasing the sway of large corporations in politics. Referencing wealth inequality, and sounding straight out of a “How To Be Bernie Sanders” handbook, Steyer argued that “If [America] is a banana republic with a few very, very rich people and everybody else living in misery, that’s a failure.” He also highlighted his goal to “push power … to the people.”

Steyer’s father, Roy Steyer, was an esteemed Jewish lawyer who famously tried Nazi leaders at the Nuremberg trials. In his video, Steyer attributes his activism to the influence of his parents.

Steyer has been the target of various anti-semitic attacks. Last year, the vice president of the NRA told a right-wing conference that three Jewish billionaires, “George Soros, Michael Bloomberg [and] Tom Steyer,” were contributing to a “socialist takeover” of the United States. A few months later, House Majority Leader Kevin McCarthy mocked Steyer just after a Steyer’s home was targeted in an attempting mail bombing.

Although a late-comer to the Democratic race, Steyer’s high profile and wealth may jump start his candidacy. Steyer intends to spend $100 million financing his campaign.