“Graphic Details: Confessional Comics by Jewish Women” is the first museum exhibit to explore this unique niche of autobiographical storytelling by Jewish women. The touring exhibit, sponsored by the Forward, features the work of 18 Jewish women artists. The Jewish Women’s Archive, which crossposts regularly with The Sisterhood, is interviewing each of the artists about their work and their experience as a female, Jewish graphic artist. Today we spoke with Sarah Lightman who co-curated the exhibit with Michael Kaminer. Her “Dumped before Valentine’s” series is featured in the exhibit.

A star-studded panel discussion officially launched “Graphic Details: Confessional Comics by Jewish Women” at San Francisco’s Cartoon Art Museum on Thursday, October 21. But not everyone on the panel agreed that the exhibit’s theme even made sense. Trina Robbins, one of the leading lights in comics and a noted “herstorian” and author, questioned why the show focused solely on Jewish cartoonists, noting that some of her favorite fellow artists — including the acclaimed Alison Bechdel and Phoebe Gloeckner — were overlooked because of their non-Semitic origins. 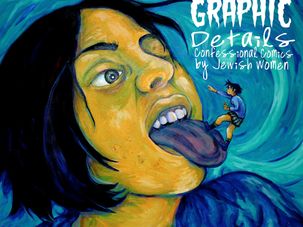