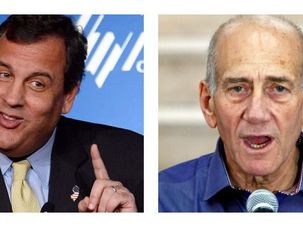 Gov. Chris Christie and Israel’s Ehud Olmert both forgot the oldest rule in the book — the one about a woman scorned, J.J. Goldberg writes. Especially if she’s your chief of staff.

Behind Every Scandalized Prime Minister...

It is said that behind every powerful man is a strong woman. In the professional realm, it is conceivable that a woman who begins as a personal secretary could evolve into an “office manager” — and beyond. But whatever her title, her real value to her employer is her steadfast loyalty, her willingness to keep any secrets or flaws under wraps and to act as a gatekeeper and caretaker to the man. She agressively protects and promotes him with unshaking loyalty. For Shula Zaken, that man was Ehud Olmert. Zaken was hired at Olmert’s Jerusalem law office job when she was just 17. And she remained by his side on his professional climb as Knesset member, Jerusalem mayor, Industry Minister and up to the lofty perch of the Prime Minister’s office.