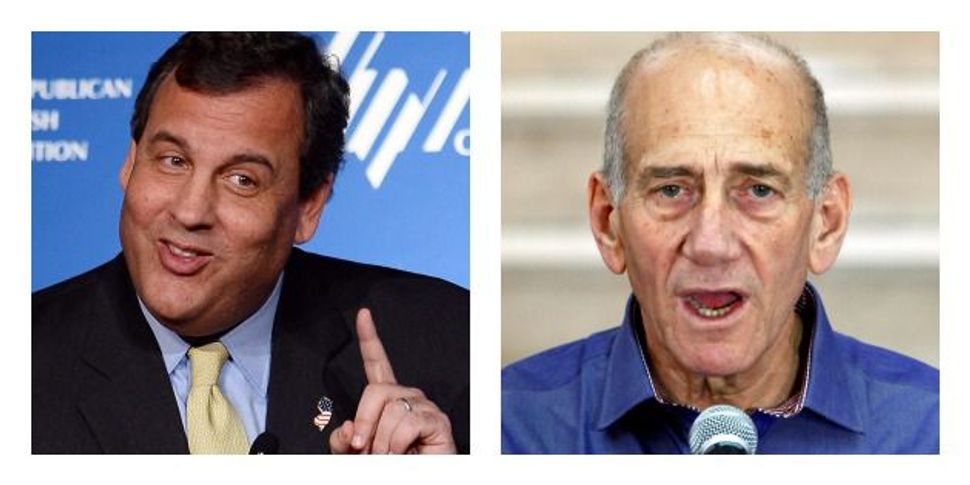 The state of New Jersey prides itself on its “long and strong relationship” with the state of Israel. The feeling is often mutual. But this is getting ridiculous.

Both states are sweating through major political corruption scandals reaching to the very highest ranks of government. In both cases, the central figure in the scandal saw his prospects take a dive this weekend when a former top aide, a woman confidante he’d thrown under bus, turned around and decided to testify against him. Both are erstwhile moderate white knights whose dreams of top office are probably now crushed because they forgot the oldest rule in the book — the one about a women scorned. Especially when she was your chief of staff.

One of them is former Israeli prime minister Ehud Olmert. The other is New Jersey Governor Chris Christie.

Olmert is awaiting the judge’s verdict next Monday in a real estate bribery case, the so-called Holyland Affair, dating back to his years as Jerusalem mayor in the 1990s. Acquittal, which seemed likely, would have cleared the way for him to try to regain the prime minister’s office, from which he resigned under a cloud of investigations in 2008. On Thursday, though, prosecutors reached a plea deal with Shula Zaken, Olmert’s longtime bureau chief and close confidante for 35 years, who was indicted with him. She agreed to testify against Olmert in return for a reduced sentence if the judge agrees to reopen proceedings.

Zaken had stood by Olmert through a string of bribery and corruption investigations and trials, refusing to testify against him and even claiming responsibility for bribes prosecutors blamed on Olmert. That all changed last October, though, when Olmert, during testimony, was asked if he thought Zaken was corrupt and suggested prosecutors ask her.

The other is New Jersey’s Republican governor, Chris Christie.

He’s fighting off suspicions that he knew about a plot by his aides last September to snarl traffic in a Democratic-run New Jersey town, Fort Lee, by shutting down access lanes to the nearby George Washington Bridge. The case has shaken his once-soaring popularity and possibly killed his hopes of winning the 2016 Republican presidential nomination — though he was in Las Vegas this week attending the Republican Jewish Coalition confab and meeting with Sheldon Adelson as though nothing were amiss at home.

So far the evidence in the bridge case hasn’t run higher than his former deputy chief of staff, Bridget Anne Kelly, who authored the smoking-gun August 2013 email memo telling a bridge official it was “time for some traffic problems in Fort Lee.” It might have stopped there, too, if Christie hadn’t decided to put Kelly through the wringer. He fired her in January, publicly called her “stupid” and “deceitful” and left her twisting in the wind.

All that paled, though, next to the “independent” legal report on the scandal released Friday, commissioned by Christie’s own office, which not only exonerated Christie of all responsibility but offered humiliating details about Kelly’s love life, implying that she ordered the bridge shutdown while she was overwrought over a bad breakup. In response, Kelly’s lawyer issued a statement Friday evening slamming the legal report’s “venomous, gratuitous, and inappropriate sexist remarks” and saying that Kelly would be willing, in return for immunity, to offer “evidence” that “could be critical to verifying” whether or not Christie was involved.