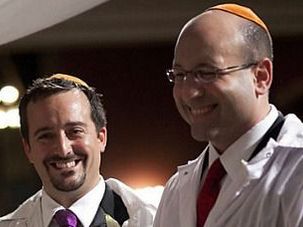 An Orthodox rabbi explains why he performed a ‘commitment ceremony’ for two men. He believes it’s possible to be gay and frum at the same time.

Roee Ruttenberg reported over the weekend in +972 Magazine that “for the first time in history an openly-gay American rabbi ordained by the Orthodox movement has officiated at a same-sex wedding ceremony.” He was referring to a Jewish marriage ceremony that Rabbi Steve Greenberg performed for gay couple Yoni Bock and Ron Kaplan at the Historic 6th & I Synagogue in Washington, D.C. last Thursday evening.