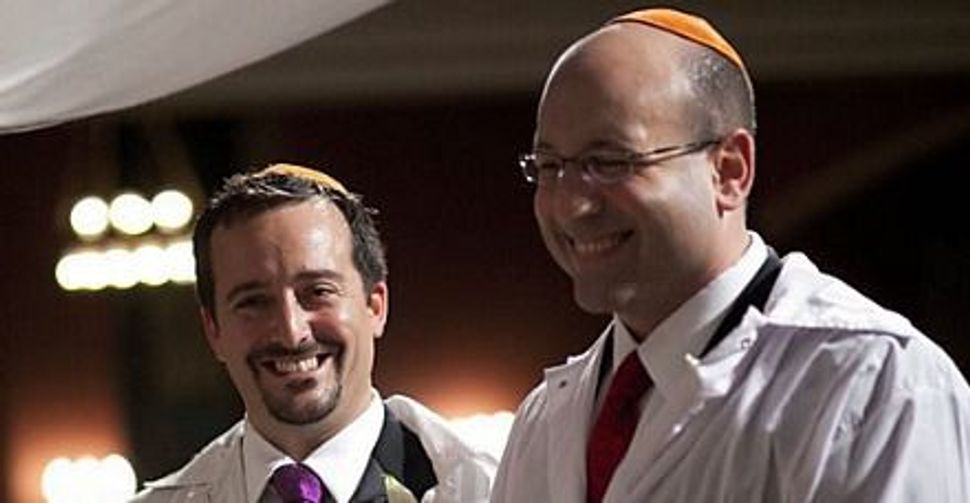 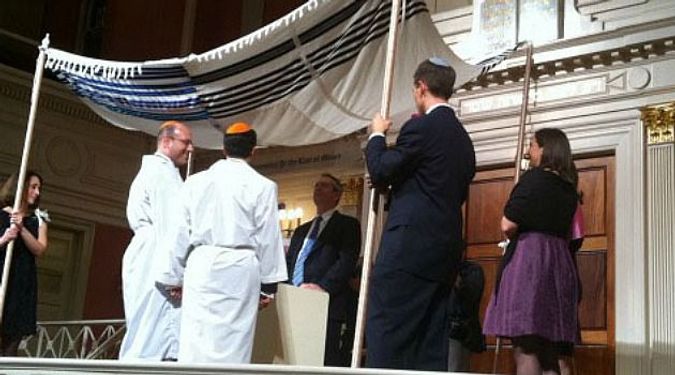 Commitment to Faith: Rabbi Steve Greenberg presides over an ?commitment ceremony? for a gay couple.

Not a month goes by without a young person just out of the closet — or sometimes that person’s shocked parents — contacting me in search of Orthodox leaders to respond credibly to their questions. It was this reality that was on my mind as I confronted the backlash to a same-sex commitment ceremony I performed last November. In response, 100 rabbis signed a statement censuring me. While these rabbis may prefer to foist this challenge upon me, the truth is that, as rabbis, we are all responsible for the conflict between present halachic norms and the real lives of people. We are all responsible for the gay and lesbian kids who are growing up in Orthodox communities and want a future. And I am not the only Orthodox rabbi who believes so.

Three years ago I interviewed 20 Orthodox rabbis on their pastoral experiences with gay people and their families. Those interviews were taped and transcribed, and many of them are incredibly moving. I wish I could share these and other conversations I have had over the years with Orthodox rabbis whose honesty and decency, whose humility in the face of a difficult question, are not widely known. But the interviews are secret because I promised not to share them. I can quote a few rabbis whose views were written or spoken publicly — though I am still reluctant to use their names.

When asked by a group of students what his views on homosexuality were one illustrious Modern Orthodox rabbi responded that he used to know the answer to that question. He could point to chapter and verse. Now when a gay person comes to him for counsel, his answer is, in his own words: “I don’t know. I just don’t have enough information to give a clear answer. I have 612 mitzvot that I feel I’ve got a better handle on. Come to my shul and we’ll work on those together.” Among the most human and honest responses an Orthodox rabbi has ever given to this dilemma is “I don’t know.”

Rabbis who actually have an open conversation with gay people discover that no one chooses his or her sexual orientation. Another beloved leader of Modern Orthodoxy, a rabbinic communal leader and a founder of a yeshiva, wrote with deep empathy early in his career: “How can we deny a human being the expression of his physical and psychic being? If there’s a problem with the kettle, blame the manufacturer. Is it not cruel to condemn an individual for doing that which his biological and genetic make-up demand that he do?” This Orthodox rabbi is not afraid of articulating the profound theological and moral challenge posed by Halacha as it is presently applied.

Recent rabbinical statements demand life-long celibacy from gay and lesbian Jews. But a number of rabbis have shared with me their doubts about these guidelines for the simple reason that God does not demand the impossible from people. A well-respected Orthodox author, rabbi and educator has said in a public forum: “It is not possible for the Torah to come and ask a person to do something which he is not able to do. Theoretically speaking, it would be better for the homosexual to live a life of celibacy. I just would argue one thing: It’s completely impossible. It doesn’t work. The human force of sexuality is so big it can’t be done.”

Given the unreasonable demand of life-long celibacy, it is very tempting for rabbis to believe that therapy can solve the dilemma. Rabbi Shmuel Kamenetsky has recently joined forces with JONAH, a Jewish “change therapy” organization, to claim that, as a matter of religious principle, since the Torah prohibits homosexual behavior the orientation must be, by necessity, a curable disease. Responding to this dangerous circular argument, another learned Orthodox rabbi and scholar, a man who has written extensively about homosexuality, has publicly said, “I am not under any compulsion to support a failed therapy in order to save myself from a distressing religious conflict.”

I trust that brave poskim, those willing to take the logic of empathy to heart and press the halachic system and the community toward greater responsibility, will soon rise up and truly employ the inner creativity of the Halacha to solve this dilemma. Those who believe this to be a fundamentally insolvable problem are, to my mind, lacking faith in both God and Torah and are dangerously risking the credibility of Halacha. Rav Yehuda once said, “We appoint to the Sanhedrin only someone who knows how to purify a reptile”. Rav Yohanan added that anyone who does not know how to prove a reptile pure and prove it impure 100 times cannot defend the accused.

The profound halachic questions of our moment (and this is not the only one) surely demand a generous sense of the possible. Rabbis will need to be as fearless as were their forebears to imagine the opposite of their suppositions. Especially when an accused is before the court, when the consequences are dire for a defendant, the most versatile and creative of minds are required to achieve a just verdict.

But even before or without such halachic innovation, communities bear a profound responsibility to gay people and their families. Just imagine that you are a parent and that your child of 16 or 20 or 24 has just come out to you. What is your first thought? What do you say? What you worry about most is whether he or she will be happy. When later that night you talk with your spouse, you begin to imagine what the child must have gone through, perhaps for years — the shame and dread — all without your knowledge. You feel guilt for a suffering that you could not alleviate, perhaps anger for being shut out of her life, and you mourn the loss of the hopes and fantasies of her future that now seem impossible. Perhaps you worry for his safety. You think about what it was like for him, having played out in his mind over and over again how this moment would unfold, not knowing how you would respond, and terrified that he would lose your love.

While this scenario happens often enough, it is perhaps more common in frum, or religious, homes that teens don’t come out to family members at all. Many gay kids, when they arrive at puberty, turn sullen and detached and suffer from clinical depression. One out of six contemplates suicide. I was recently told that in a single New York City psychiatric clinic there is a suicide attempt by a gay Orthodox person yearly. Sadly, the healthiest of these young people, having read the tea leaves years earlier, decide that they will have no life in the Orthodox world and are no longer frum by the time their parents find out.

In fact, this sad outcome is not necessary. Frum families often do find their way toward accepting and embracing their gay children. While they typically struggle with their own faith questions, the harder challenge is managing communal expectations. Most are unaware that there are Orthodox communities that are already making room for gay people. Nowadays, to my knowledge, there are four or five such synagogues in the United States where gay frum individuals, couples and families can join and be comfortably integrated.

Frankly, whether for social or formal reasons, I do not expect these rabbis to conduct a same-sex commitment ceremony anytime soon. But full synagogue participation, board service, Sabbath dinner invitations, a Kiddush in honor of a new child and the celebration of bat mitzvah are all present-tense realities in these Orthodox synagogues. I and others are working to see that there are not five but twenty-five welcoming Orthodox congregations in the next ten years.

So, if I don’t expect any other Orthodox rabbi to conduct a commitment ceremony, why did I do it? Because I am gay. Because I bear a unique responsibility that comes from a personal understanding of the conflict. Because I am now happily partnered in a 12-year relationship with an Orthodox man whom I love dearly, and we are raising the most terrific 1-year old little girl, who is the joy of our lives. I could never have imagined that any of this would be possible 35 years ago, when I was 20 years old.

I conducted this ceremony because I thought that it was time to tell your sons and daughters that are wondering what they can expect from life that they can remain committed to God and to the grand and transformative vision of Torah and mitzvot; that they can find companionship, create families and become active members of frum communities. And when loneliness gives way to the miraculous discovery of love, maybe they can raise that love to commitment with the hope that their families and friends, in a way different from most but still religiously meaningful, joyous and sweet, can dance with them.

Steve Greenberg is a senior teaching fellow at CLAL — the National Jewish Center for Learning and Leadership, and the author of “Wrestling With God & Men: Homosexuality in the Jewish Tradition” (University of Wisconsin Press, 2004).