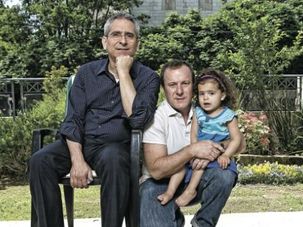 Rabbi Steven Greenberg Talks About Being Orthodox and Gay

Orthodox rabbi Steven Greenberg, 57, and actor and opera singer Steven Goldstein, wed last year in a civil ceremony in New York, while holding the toddler in their arms.

More than 100 Orthodox rabbis have signed onto a statement in opposition to same sex weddings, saying that gay marriage is a ‘desecration of Torah values.’

Must-Reads on Judaism and Gender

Two fabulous Jewish magazines have new issues out that are must-reads for anyone interested in Judaism and gender.