Django Unchained | Coming To The Screen on BlackTree TV

BlackTree TV sits down to interview Quentin Tarantino for his movie Django Unchained. MY OPINION ON QT I don&apos;t know how many fans of BlackTree I will lose by saying so, but I am a fan of Quentin Tarantino, because I like good movies. Django is one of them, it gives you that Western fill while touching on a somewhat touchy subject here in America, Slavery. A topic so touchy, that another film whose name is being thrown around this year for Best Picture, Lincoln, whose whole premise seems to be on the abolition of slavery, failed to show one minute, not even one second of slavery itself. That is how much slavery doesn&apos;t want to be discussed in America, and particularly in Hollywood. Now the Holocaust, that&apos;s a different story, every year there are several movies that reference or center around the Holocaust, yet slavery is rarely if ever mentioned. Even our own beloved trailblazer of a director Spike Lee, has not done any movies that have shown or referenced slavery other than in the speeches performed by Denzel in Malcolm X, and some references to the KKK, but slavery no. As a matter of fact, Spike has even done two movies which have referenced or centered around the Holocaust. The Inside Man portrays a villain who was an old Nazi war criminal and who had derived his riches from Holocaust victims, and Miracle at St. Anna portrayed a regiment of soldiers who were fighting against Nazi Germany. Even this years Red Tails, was centered around African Americans fighter pilots, known as the Tuskegee Airmen fighting the Nazi&apos;s. Which brings me to Quentin Tarantino whose last major film Inglorious Basterds got him another Oscar nomination, as well as Django co-star Christoph Waltz who won for Best Supporting Actor, and this film also portrayed the war against the Nazi&apos;s. But leave it to Tarantino to push the envelope, and make Hollywood uncomfortable, which to me makes him the perfect director for this film Django. Tarantino who has already been accused several times of using the word "Nigger" in his pictures, as dialogue between characters, has not been the most beloved director among the Black race. Yet most of his films have featured or stared black cast members, which is not something that most directors can say in this town. So I like the guy, I like his scripts, I think his dialogue is a true reflection, where as I was somewhat troubled by the washed over language portrayed in Red Tails. It made many parts of the movie unrealistic. Not that Django is realistic, truth be told Jamie Foxx would been a dead "Ni**a" 10 minutes into that movie in real life. A black man rolling through the south on the Horse would not have been a 3 hr movie, it woulda been more like a 30 second commercial, and it would not have had a happy ending. So with that being said, it is classic Quentin Tarantino brand of entertainment, with the violence, the language and the grit. So I sat down with the Academy Award Winning Director to talk Django, and his use of the word "Nigger" in this picture as well as others, watch to see what he had to say…. P.S., If you can&apos;t take the amount of times you have heard or read the "N" word in this post, than you are probably not ready to go watch the movie. Segment journalist: Jamaal Finkley A BlackTree Media Production Subscribe to our channel http://goo.gl/lVN14 Log onto our stream at http://goo.gl/74Ama Follow us on twitter @BlackTreeTV 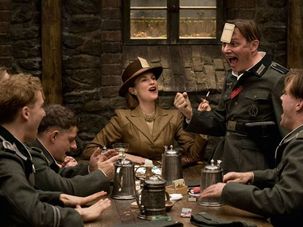 Quentin Tarantino is a director, writer and cinematic iconoclast known for works such as “Kill Bill” and “Pulp Fiction” that revel in non-linear plots and the portrayal of violence. His most recent film, “Inglourious Basterds,” takes the viewer on a bloody

Roseanne Barr as Hitler, Quentin Tarantino trailing a (satirical) Nazi recruitment film and now Rush Limbaugh says that President Obama’s logo is Nazi-like and that the Democratic party has some similarity of issues.