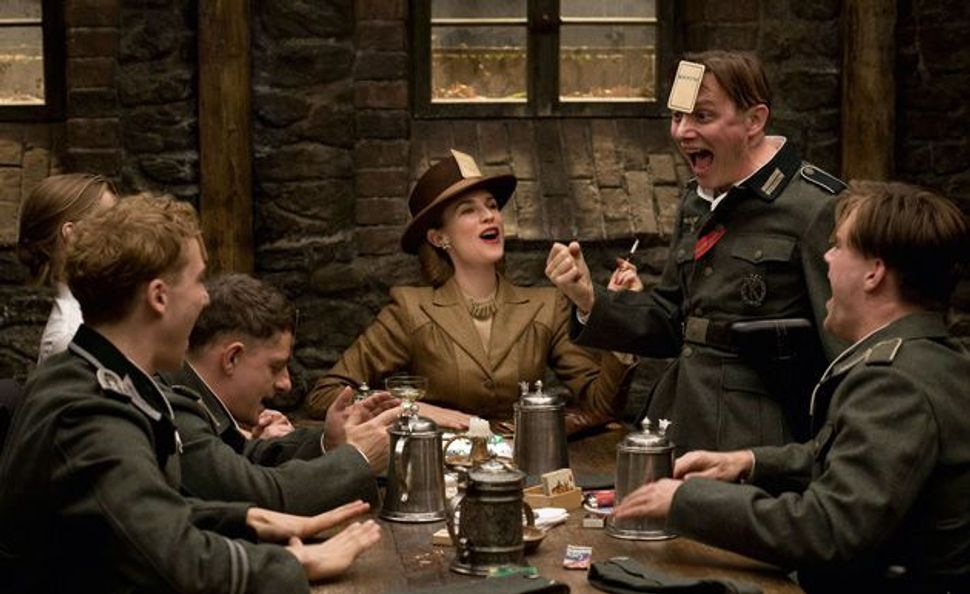 Cards on the Table: Tarantino plays with our expectations. Image by UNIVERSAL

Quentin Tarantino is a director, writer and cinematic iconoclast known for works such as “Kill Bill” and “Pulp Fiction” that revel in non-linear plots and the portrayal of violence. His most recent film, “Inglourious Basterds,” takes the viewer on a bloody stroll through a fiction in which a band of Jewish-American soldiers is given free rein to go to occupied France and kill Nazis. After the film’s first New York screening at the Museum of Jewish Heritage — A Living Memorial to the Holocaust, Tarantino met with the Forward’s Jordana Horn to discuss his film. 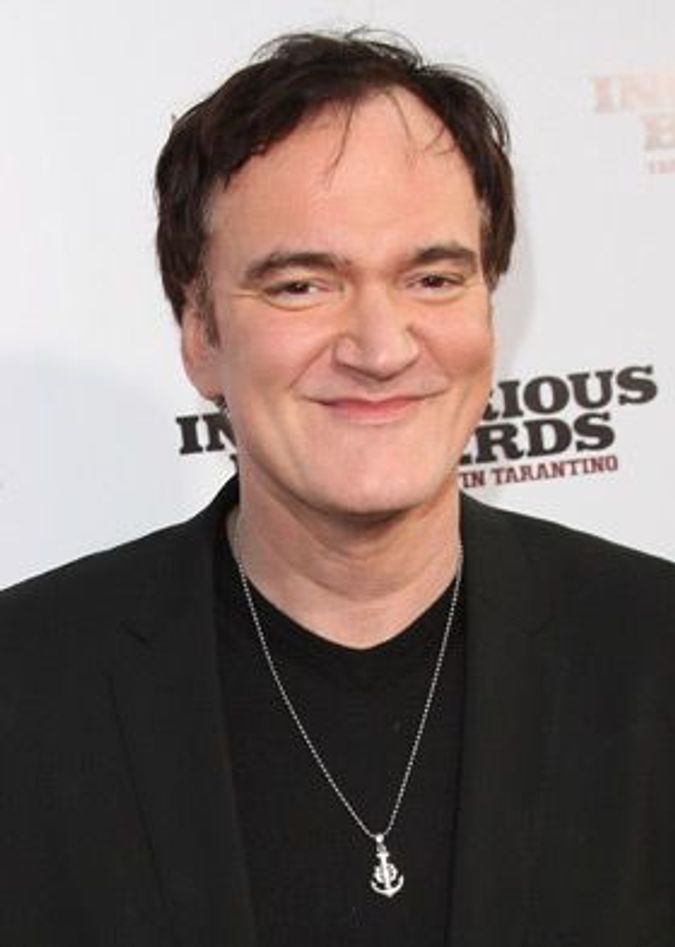 Jordana Horn: I wanted to ask you how you felt, both going in and coming out of the screening last night, within that particular context.

Quentin Tarantino: … I thought it was a complete triumph. I was very excited about it…. I thought it was a very thought-provoking conversation….I like my movie. I’m really proud of my movie. And if they didn’t like it, I would have been like, “Well, screw you guys, all right? I like my movie!” You know, it wasn’t like I was currying favor. But yes, I do think I wanted them to like it. And I do appreciate it that they did. … The movie has a … certain tone to it … This is not “Schindler’s List.”… So, you know, don’t go expecting that. And look, when you do a movie that has as much humor as mine has… it’s understandable that some people could be touchy about it.

This is not a Holocaust movie, really.

No, it really isn’t at all…it’s more of the thing of the bunch of guys on a mission … like a ’60s movie, like the “Devil’s Brigade” or “Dirty Dozen” or something like that. But that’s the way I normally do stuff. I start off with a certain genre…that’s the jumping-off point. I intend to expand the genre, blow the doors off of it. But the starting-off point is that there’s a bunch of guys, and there’s a mission … this movie’s closer to something like E.L. Doctorow’s “Ragtime,” with a community of characters, an overall “big story” that leads somewhere, and a mix of invented characters and historical figures.

Could you go into why you picked this particular time and place in history?

World War II is one of the most interesting and fascinating story subjects of the 20th century. It was the most profound thing that happened in the 20th century. We actually — humanity — stopped the return of the Dark Ages, which could have very well happened if the Nazis had been successful. Before that, it was the way it always was for countries at war: might makes right. ‘I take your country and make it mine,’ and that’s the way the world was governed. Forever, all right? And the Industrial Age stopped that, but we could have gone back to that, if the world hadn’t risen up…But all the different subjects that we put in the movie pertain to World War II, whether it was the idea of American Jews getting vengeance behind enemy lines in a way that their European counterparts … couldn’t … And even just the way that you’re dealing with Germany via filmmaking inside the Third Reich … dealing with Josef Goebbels, not as the architect of evil, the way he’s always seen, but in his job as studio head.

What made the Nazis so bad was their wholesale devaluation of the sanctity of human life. At what point, when you’re laughing at the scalpings, do you think, you’ve turned it around?

If you’re dealing with people like the Nazis … well, you either eat the wolf or the wolf eats you. You know? That’s where I would be coming from in a situation like that….

Why not make Raine Jewish?

You know, he just wasn’t … when I came up with the scenario of all of them together, he just wasn’t … It was very important to me that he was a hillbilly. By every outward appearance, you’d think he’d be a racist redneck. And in fact, he’s the opposite…He was probably fighting the Klan in the ’30s, before the war. The Nazis? Same thing. He’s a student of history, so he knows about the Apache resistance — he decides — “I want Jewish soldiers in here, because I want it to be a holy war. I want them to bring what a gentile wouldn’t … the gentiles have the luxury of being soldiers. The Jewish-American soldiers have the duty of being warriors.”

In my first imagining of this story, Shosanna was a much more badass character, kind of a Joan of Arc of the Jews … she has lists of Nazis to wipe out … And when I put it away and ended up doing “Kill Bill”, what I wanted to do with Shosanna, I gave to “The Bride.”

It had a very nice effect … when I came back to this story, I thought, ‘well, I can’t do that anymore. And it just made Shosanna all the more realistic … and it made her more like Jackie Brown. Her power is in keeping it together … That becomes her strength, as opposed to wiping out Nazis … an idea that I had … one of the ways Nazis were able to really clamp down on people acting against them was that one German life was worth 10 lives … So, she wasn’t part of the resistance in this [earlier] version [of the idea], and she’s killing Nazis, and then they were going to kill 10 resistance prisoners every week until she gave herself up. And then where I had her coming from was, “To hell with the resistance … F***| the French. They give more of a damn about Notre Dame than the damn Jews, so I don’t care about them. I’m fighting for Jews, make no mistake about it.”

[Later] … I think one of the things that makes the movie enjoyable to watch — just the fact that it’s a World War II movie, you can’t help but have associations in your mind about what you think it’s going to be. The movie ends up being very different from that … part of the liberating fun of actually watching it is that it plays out differently from what you’d imagined …

How is this movie different from your other movies?

I don’t think it’s that different at all. Some of the qualities that make this movie particularly unique to the World War II genre are part and parcel of what I do in film. Humor is part of what I do. That’s part of my thing. And actually the basis of most of that humor is getting you to laugh at things that really aren’t that funny. If I were to write and direct something that didn’t have those qualities, if I were you, I’d be suspicious. I don’t know how to do it any other way.

What’s up with the misspelling of the title?

It’s an artistic stroke. To describe it would take the piss out of it. Consider it a Basquiat-esque touch.

[Laughs] I wish I could describe the hand gesture that you made as you said that.

[Laughs] It was sort of like, why is he getting the check? But he has Elmer’s Glue stuck in his hand.

Christoph Waltz’s character [of Nazi officer Hans Landa] was amazing. I would have been very interested to see how, if Waltz had come to the museum, he would have been received.

Well, you know, Waltz’s son is a rabbi.

Yes. And I’m actually kind of glad about that. There are several qualities in Christoph that are very similar to Landa. Not the Nazi part, obviously, but his erudition and his cleverness. Because of that, I can actually make parallels between him and Landa and not get too worried about calling him a Nazi.

In Israel. I had to check on a Yiddish word, and Christoph called his son in Israel, who is actually a Yiddish expert. Christoph is obviously a language expert himself as well.

I came into this film thinking, ‘Surely there are enough films about the Holocaust already without Tarantino making one too.’

For the last 30 years, all the movies coming out about World War II, whether it be feature films or TV movies …they really focus on the Holocaust and the victims of World War II … But even during the war…and even during the ’60s, you know, with the guys-on-a-mission movies, there was no crime in telling a thrilling story. You didn’t feel like an idiot, for example, when you said, ‘I had fun watching The Great Escape,’ even though Nazis mow down and kill people. I have a great time watching that movie. It’s very entertaining. And that doesn’t make my movie better or worse, but it’s something that has been lost in the last 30 years of the telling.

International trailer for “Inglourious Basterds” — widely considered the best trailer for the film!