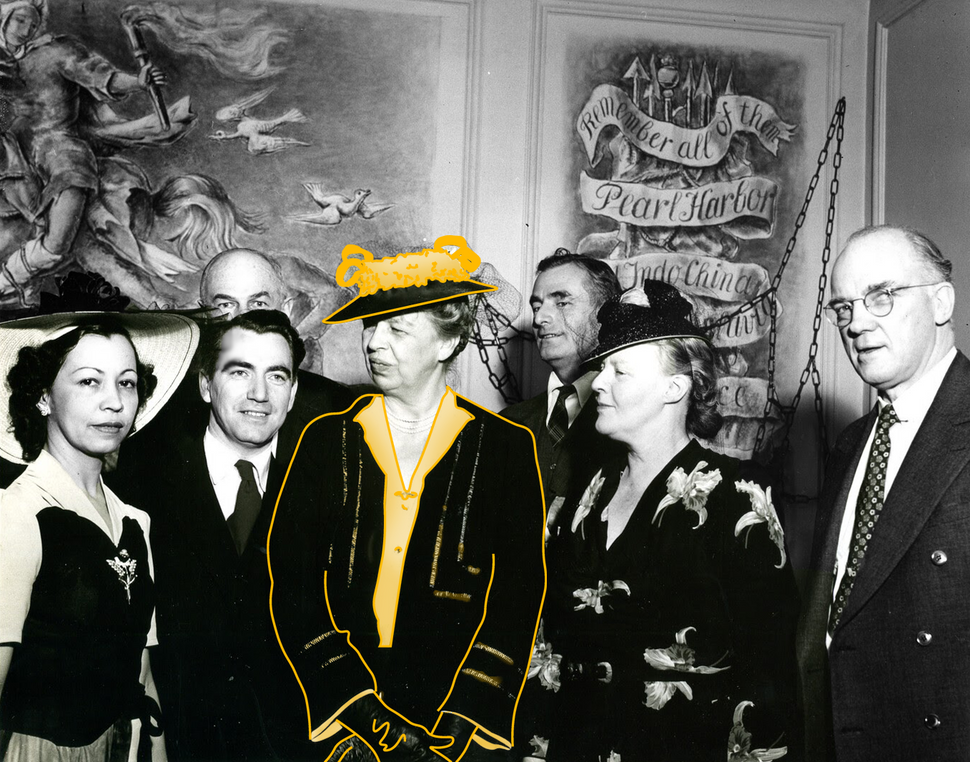 The Forward is one of 57 libraries, museums and city agencies, contributing to a new app called Urban Archive, helping make historical materials engaging and accessible. This week, bring you a look at First Lady Eleanor Roosevelt. Roosevelt was an international figure but much of her life and work happened in New York City. For more, check out our Urban Archive collection.

Eleanor Roosevelt was a human rights activist and the longest-serving first lady of the United States.

This undated photo — probably from the 1940s — of Roosevelt was taken at Freedom House, an American organization devoted to the support and defense of democracy around the world. At the time, Freedom House had an office at 32 East 51st St., between Park and Madison Avenues, seen above.

The man behind Roosevelt is American Pulitzer-prize-winning journalist and historian, Herbert Agar. To Roosevelt’s left is anti-Fascist, journalist and close friend of Roosevelt, Dorothy Thompson. She was the first American journalist to interview Hitler. After the interview was published — and was not to Hitler’s liking — she was deported from Germany on his personal orders.

On Roosevelt’s right is the human rights activist and Freedom House cofounder George Field. Earlier in his life, “he had been imprisoned for speaking against American involvement in World War I and won nearly a million votes in the 1920 campaign for the White House, which he conducted from his cell at Leavenworth, Kan.,” according to his New York Times obituary. By the 1940s, he was working hard to bring the country into the war against the Nazis. He spent his later years fighting racism, McCarthyism and other American social problems.

On the far right of the photo was American lawyer, diplomat John Foster Dulles. He was the brother of CIA director Allen Dulles.

Freedom House was conceived in the early days of WWII as a way to merge several local organizations that were advocating an end to United States isolationism. Its founders saw the organization as a non-partisan, democratic challenge to the Braunhaus in Munich, a center for Nazi propaganda.

Local Nazis founded Amerikadeutscher Volksbund, or German American Bund, in 1936 at 178 East 85th Street. On February 20, 1939, the Bund held an “Americanization” rally in New York’s Madison Square Garden, denouncing Jewish conspiracies, President Roosevelt and others. The rally, attended by 20,000 supporters and members, was protested by huge crowds of anti-Nazis, who were held back by 1,500 New York City police officers.

So you could say Freedom House had its work cut out for it. In its first year, Freedom House had arranged for more than 200 broadcasts over local radio stations. During and after the war, it served as a vocal proponent for racial integration of the U.S. armed forces, an international commission on human rights and the formation of the United Nations.

Eleanor Roosevelt, or עלינאָר רוזװעלט, as her name was written in Yiddish, was quite frequently mentioned and admired in the Forward. As early as November 1935, when she attended the dedication of the first public housing in the city, the paper noted “Mrs. Franklin Roosevelt” was among the speakers. Eleanor Roosevelt and Republican presidential nominee, Wendell Willkie, who ran against her husband, President Roosevelt in 1940, were co-chairs of Freedom House when it opened in 1941.

After his 1944 death, the Willkie Memorial Building of Freedom House located at 20 West 40th St., was formally dedicated in October 1945. Its first occupants included the National Association for the Advancement of Colored People, the Anti-Defamation League and Metropolitan Council of B’nai B’rith, Public Education Association, and the Citizens’ Housing Council of New York.

Eleanor Roosevelt, an international political figure in her own right, was also very much a New Yorker. Born to a family of prominent New Yorkers, she spent much of her life in New York City. Born in Manhattan in 1884, at the age of 9 she went to live with her maternal grandmother in the Hudson River Valley after the death of both of her parents and her younger brother. She would return to live in Manhattan, at 211 East 62nd St., as an adult, where she carried out much of her advocacy work, which was eagerly followed by readers of the Forward.

Roosevelt’s own maternal great-grandparents were immigrants from Ireland to Brooklyn.

In 1935, the Forward, along with other newspapers, reported the exciting news that Eleanor Roosevelt was helping to initiate the first publicly-funded low-income housing project in the nation. First Houses was the first project undertaken by the New York City Housing Authority.

“We have got to face the fact that in this country, both in cities and in certain rural areas, there are many people housed in a manner not only costly to them but costly to us as taxpayers,” said Roosevelt at the ribboncutting. “The cost to the citizens of the city, state, and nation is greater than we can realize.”

Despite being the highest-ranking woman in the land, as America’s first lady, Roosevelt remained appealing and approachable. So much so that in 1942, the Forward reported on Eleanor Roosevelt’s knish encounter of the close kind, telling a story about Lower East Side Jewish businesswoman Gussie Schwebel and her unlikely correspondence with the first lady. Schwebel ran a knish restaurant at 191 East Houston Street, just off Orchard Street. After the New York Sun ran a local-interest story about her famous knishes, Schwebel sent a clipping of the article along with a letter to Roosevelt.

“It is my most sincere hope that I may be permitted to send you a sample of my dish, the knish, which, believe me, my dear Mrs. Roosevelt, is really worth tasting,” she wrote.

“Also, I wonder if I may not be able to be of service to my beloved land, by way of introducing the knish, which is very wholesome and not costly to produce, into the diet of our armed forces. I shall be most happy to devote all of my time and my energy to this end.”

Amazingly, the first lady’s secretary wrote back saying that Mrs. Roosevelt would be in New York soon and would be happy to accept some knishes at 49 East 65th St., where she would be staying.

When Eleanor Roosevelt arrived in New York, a photo of Mrs. Schwebel, carrying a tray of knishes, appeared on the front page of the Forverts, with the headline, “Mrs. Roosevelt Would Like to Taste Jewish Knishes, but…”

It is not certain whether or not Roosevelt got to taste the knishes. The Forward reported that “One report states that the first lady’s secretary would not accept the knishes on the grounds that too much of a big deal was made of it. The home on 65th Street was beleaguered by a crowd of curiosity seekers who were eager to accompany the parade of knishes.”

Known for her support for education, Roosevelt addressed students at Brooklyn College in November of 1944. In the speech, she implored to the young people to fight against prejudice, particularly racial prejudice against Black Americans. She shared an anecdote from her recent trip to Guadalcanal, where she saw that fallen American Catholic, Jewish and Protestant soldiers were buried in graves side by side, and interpreted this as a symbol of American oneness and solidarity.

“The boys who took the canteens and hung them on the crosses wrote across them ‘A Grand Guy,’ or ‘A Great Pal.’ You knew they came from many backgrounds.” She continued, “Since we can do that in war, then we must be more considerate of it in peace.”

In 1953, when Roosevelt met Israeli leader, the American-born Golda Meir (then Meyerson), also at Brooklyn College, the Forward was there to encourage readers to attend their historic encounter there. Later, in an introduction she wrote to a book of Meir’s papers, Roosevelt called Meir, a woman one cannot help but deeply respect and deeply love.

After the death of her husband, President Franklin Roosevelt, in 1945, she resided at 29 Washington Square West until 1949. Her public service continued and she remained in the public conversation as she forged an even greater independent path. As early as October 1946, The Forward featured a photograph of Roosevelt presenting acclaimed Jewish statesman Bernard Baruch with the Freedom House plaque for his “vision and statesmanship in the world quest for peace.”

Later on in October 1946, with Roosevelt’s service as a member of the U.S. Delegation to the United Nations, the Forward featured her in line at the U.N. cafeteria — as relatable as ever. Roosevelt went on to chair the U.N. Commission on Human Rights and is widely regarded as a pioneering civil rights activist of the 20th Century.

In November 1962, the Forward’s headlines were bolded and enlarged when reporting Eleanor Roosevelt’s death. “The World Mourns the Death of Mrs. Roosevelt,” they noted. They illustrated the front page with a series of four images depicting her with American and world leaders, including then-President Kennedy. The caption read, in part: “Eleanor Roosevelt spent a great deal of her life in the company of presidents.” In their lead article about her death, they acknowledged her as “the world’s first lady.”

Eleanor Roosevelt died in her Manhattan home at 55 East 74th Street on the Upper East Side on November 7, 1962. Her legacy, however, lived on both in memorials and through the lives of the people she helped during her lifetime, many of whom were Forward readers.

Along with her admired colleague Golda Meir, Eleanor Roosevelt is one of only six public statues of historic women in New York City, the remaining monuments being Joan of Arc, Gertrude Stein, Harriet Tubman and Shirley Chisholm.

As late as 2005, the Forward’s deep feelings for this Roosevelt were included in an obituary for Yiddish copy editor, Jacob Waisbord. A Holocaust survivor and member of the Forward Association, Waisbord came to the United States on a visa from progressive social activist group with historic ties to The Forward, the Jewish Labor Committee, one that had been obtained with the help of none other than Eleanor Roosevelt.