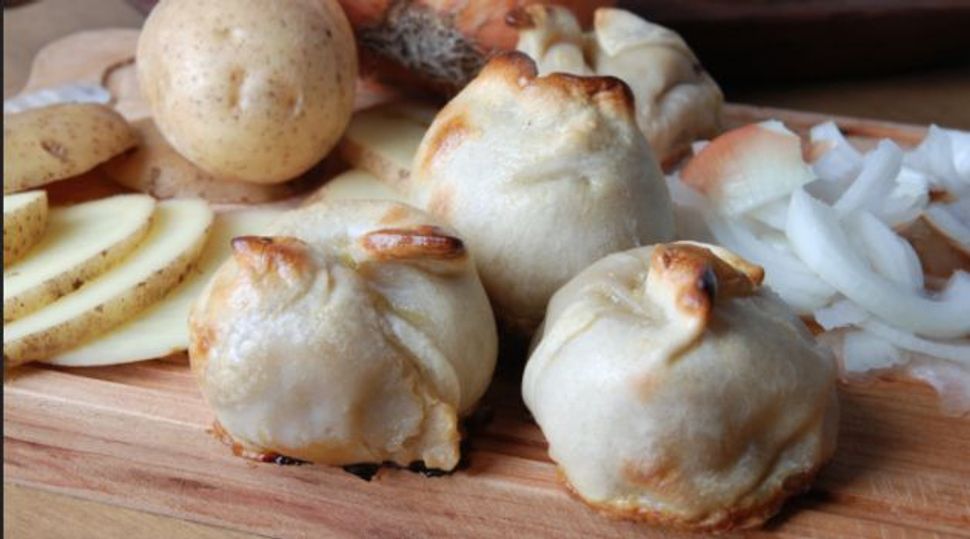 Gussie Schwebel isn’t a household name — yet. But the Boroslav, Romania-born woman wrote herself into history when she wrote a letter to First Lady Eleanor Roosevelt during World War II.

Mrs. Schwebel ran an eponymous knish concern at 191 East Houston Street, just off Orchard Street (the former site of the recently shuttered Philly’s Cheese Steak, two doors down from the late, lamented Bereket Turkish restauarant and three blocks from Yonah Schimmel’s, it should live and be well, despite gossip hinting to the contrary). Forty-three years ago this week, “Ma” Schwebel graced the front page of the Forverts. Here’s how it came to be:

On the cusp of 1942, the New York Sun published an article titled, “Wars or No Wars the Knish Queen Carries On.” The story included a photo of a plump, smiling, apron-clad woman, perched over an open door, proffering a tray of knishes — seven rows of five each — packed shoulder to shoulder, like the inhabitants of the Lower East Side. Knishes were a simple food with the power to attract high society. “Mrs. Schwebel Turns Out Her Special Delicacies Golden Brown and the Big Shiny Cars Pull Up to Get Them,” boasted the subhead of the article. Mrs. Schwebel didn’t keep it to herself.

I take the liberty of sending you a newspaper clipping dealing with my humble self.

The purpose of this letter is two-fold. First: It is my most sincere hope that I may be permitted to send you a sample of my dish, the knish, which, believe me, my dear Mrs. Roosevelt, is really worth tasting. Also, I wonder if I may not be able to be of service to my beloved land, by way of introducing the knish, which is very wholesome and not costly to produce, into the diet of our armed forces. I shall be most happy to devote all of my time and my energy to this end.

Again, I pray that you may accept a boxful of knishes from me and will let me know when and where I can send them, I am

Your most respectful servant,

Mrs. Roosevelt has received your letter of January 6 and wants you to know how much she appreciates your kind offer to send her a sample of your knishes.

Mrs. Roosevelt expects to be in New York around January 16 and 17, and if you care to send some knishes to 49 East 65 Street, where she will be staying, she will be very glad to have them.

MRS MALVINA C THOMPSON= THANK YOU SO MUCH FOR INFORMING ME ABOUT MRS ROOSEVELTS WILLINGNESS TO TASTE MY KNISHES. THEY ARE BEST OVENHOT AND FOR THAT REASON I BEG YOU TO LET ME KNOW THE EXACT HOUR FRIDAY OR SATURDAY WHEN I SHOULD DELIVER THEM TO HER HOME. GRATEFULLY WIRE ANSWER BY WESTERN UNION COLLECT= (3)

A week after that, a letter arrived at 191 East Houston Street, by postal mail.

Mrs. Roosevelt has your telegram and asks me to say that she will be glad to receive the knishes at her house, 49 East 65th Street, at 5:00 p.m. on Tuesday, January 27th.

On January 27, in anticipation of the knish caper (and ostensibly tipped off by the baker herself) the New York Sun ran an early-edition headline: “First Lady to Get a Taste of Knish,” and relayed the play-by-play set to take place that afternoon:

At 4:30, Mrs. Schwebel will snatch three dozen of the delicacies from her old-fashioned oven… Golden brown, the knishes will be loaded into a car and she and Jack [her son] will be off.

But, ah, the best baked plans of knish women…

The next day Mrs. Schwebel, apron-clad and carrying a tray of knishes, appeared on the front page of the Forverts, with the headline, “Mrs. Roosevelt Would Like to Taste Jewish Knishes, but…”

On January 28, 1942, Gussie Schwebel appeared on the front page of the Forverts. Image courtesy of the Forward Association with thanks to Zachary Loeb of the Center for Jewish History.

One report states that the first lady’s secretary would not accept the knishes on the grounds that too much of a big deal was made of it. The home on 65th Street was beleaguered by a crowd of curiosity seekers who were eager to accompany the parade of knishes.(5)

Mrs. Schwebel persevered. In 1945, the Washington Post reported her intention to celebrate the end of World War II with mass production of her preferred pastry.

We will bake the knishes in jars and people will eat them with vodka for a chaser. They will discuss the Russian neighbors almost as if a Russian were in the kitchen cooking for them.(6)

Mrs. Schwebel predicted that knish would eventually be synonymous with permanent peace, globally and at home and had a product name to prove it: “Republican and Democratic knishes — the delicious dishes.”

Laura Silver is a sought-after speaker, knish-making instructor and the author of “Knish: In Search of the Jewish Soul Food” (Brandeis University Press, May 2014).